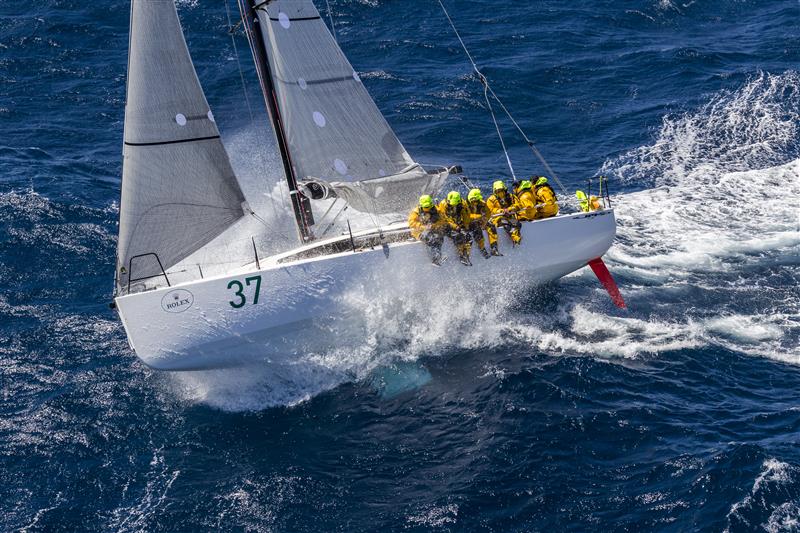 Based on current standings, both major trophies for the 2015 Rolex Sydney Hobart will be going offshore. The French-owned Archambault 13 Teasing Machine held a commanding nine hour lead in the IRC handicap stakes his morning at 6am AEDT. She was sailing downwind at 10 knots almost due south and was off Bicheno on Tasmania's east coast.

However, she is about to hit strong southerlies which will slow her progres – but by how much?

Currently in second place is Ragamuffin 52, owned by Syd Fisher and skippered by his grandson Brenton. But she is subject to a protest after a startline collision and may receive a penalty after she arrives in Hobart. Another TP52, Paul Clitheroe's Balance, holds third place.

Showing just how much the handicap standings can change when boats reach different parts of the course, for a brief moment before she crossed the finish line at 10pm last night, Comanche held the lead on handicap as well. By this morning she had dropped to 18th.

Matt Allen's Ichi Ban, which means Number One in Japanese, briefly lived up to her name too, but she is now 10th, three places behind Chinese Whisper, another pre-race favourite. Both are currently scheduled to finish around midday today.

The next arrivals will be at around 7am.The unfortunate Rambler 88 led the race for most of the first day before damaging a rudder in a collision, probably with a sunfish. She has been limping up the Derwent at around 3 knots. Ragamuffin 100 is still astern of her but is sailing at 8 knots and should catch her on the line to take second place in line honours.

Handicap honours among the big boats will currently go to Chinese Whisper ahead of Ichi Ban and Comanche. In Division 1 Ragamuffon 52 holds a three hour lead over Balance, but may pay a penalty. Craig Carter's Indian from Western Australia is in third.

Division 2 is likely to be won by John Patterson's Rush f rom Victoriawhich has a commanding nine hour lead over two NSW boats Merlin and Yeah Baby. This division includes the Clipper 70s and the CYCA's Wendy Tuck is still holding the lead, skippering Da Nang Viet Nam. She is sixth overall in theis disivion but holds just a slender eight minute lead over GREAT Britain. This will be a fascinating abttle to watch as the day unfolds. They are currently east of Flinders Island with 230nm to go, so plenty can still happen down the Tasmanian coast.

Finally, the little boats may still have something to say about the overall positions. They have been stalled in light airs off the NSW coast but are now approaching Flinders Island and making up ground with wind on the beam. The Belgian yacht Courrier Leon, which has been near the top of the standings all race, holds a two hour lead over Calibre and Mayfair.

To see all the current position, go the standings here.

With the remaining big boats due this morning and the next wave starting in early afternoon, it will be a busy day in Hobart. The scallop pies will be ready, along with the cold Cascade and the hot showers. Let the party begin!