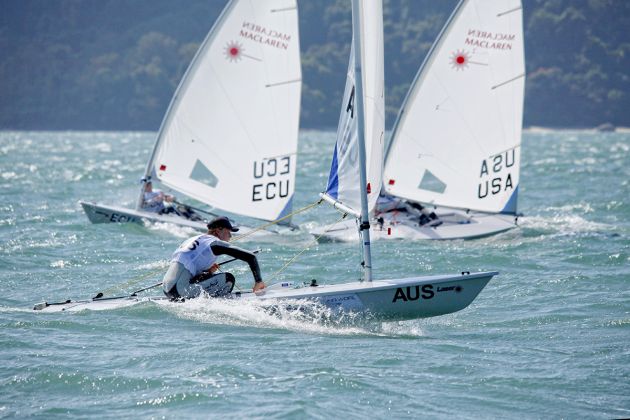 Alistair Young in the Laser Radial at the 2015 Youth Worlds. Photo World Sailing.

Day one of the 45th Youth Sailing World Championships was full on with big breeze and plenty of waves greeting the sailors for the first races.

Langkawi, Malaysia offered the record numbers of 425 sailors from 76 nations up to 20 knots of wind which eased off throughout the long day. There were nerves on shore as the afternoon session was delayed, but were put aside as the young sailors did what they came to do, sail.

With everyone trying to get off to a flyer to set up their tilt at a gold medal, it would seem that today was reserved for the few who liked the stronger winds that Langkawi had to offer for its first racing day.

Returning to the Youth Worlds after finishing fifth in Tavira, Portugal last year, Australia's Alistair Young got off to a great start with a bullet in the first race and a fourth in the second to sit on top of the leaderboard after the first day of racing.

Obviously wanting to push in to the medal places, the Aussie was happy to have strong wind to start of the regatta, conditions which the youngster enjoys, “It started off pretty windy, about 20 knots in the first race and pretty choppy. I managed to do alright though. I picked the shifts and sailed fast and won the race which was great to calm the nerves first race in.”

Calm the nerves it has as he looks at the days to follow and the possible drop in knots that could come, “We may get some lighter winds so it will be shiftier so we will all get some bigger scores, so the drops will be needed later on. I prefer the stronger winds but I don't mind to be honest. What you get is what you get so you just have to go out there and do what you can in the conditions that are there.”

The second winner of the day was Finland's Oskari Muhonen, who was also at Tavira with Young, so experience in the regatta came to the fore. The Finnish sailor's bullet followed a ninth and leaves him laying in fourth overall.

Ecuador's Matias Dyck must have been feeling happy and confident going in to the second race after finishing just behind Young in race one. That was short lived though when he was one of nine sailors to be black flagged out of race two. The Ecuadorian will be looking to drop that from his scorecard with some good sailing for the rest of the regatta.

USA's Nicholas Baird and New Zealand's George Gautrey finished near the top of the order in both races to sit in second and third respectively.

In the girl's section, the top five is held by Europe with Poland's Magdalena Kwasna currently in pole position on six points thanks to a bullet and fifth place. With a ninth place finish in Tavira, Portugal, it would seem that just like the boy's fleet, experience in this event is paying off on the first day.

Sitting just behind in second is Hungary's Maria Erdi who somehow seems to defy her age with an attitude and outlook of a seasoned competitor. Despite making mistakes throughout both races, Erdi never let it get to her as she says with her ever present smile, “I'm happy with my results but I did make some mistakes. I was leading in the first race quite a lot in the first upwind and then I capsized twice in the first downwind so I dropped back to fifth. But I managed to come back to finish third.

“In the second race it was quite tricky, I think I was about tenth around the first mark but managed to move up and finished fifth.”

So how does a sailor at the Youth Worlds handle the mistakes? Simply it would seem for the young Hungarian, “I tried to forget about the first race at the second start and I had a clear head. But it's only the first day so anything can happen.”

Even with self-confessed mistakes, Erdi sits in second, joint on eight points with Germany's Hannah Anderssohn who had a steady day with two fourth place finishes.

Taking the first bullet of the day was New Zealand's Alexandra Nightingale who couldn't carry the form through to the second race where she finished 19th. Nightingale currently sits in tenth place overall with those two results. Australia's Jacinta Ainsworth is currently in eighth position.

For the all girl's 29er fleet, it was Poland's Aleksandra Melzacka and Maja Micinska who took the first bullet, although they didn't think it was going to happen sitting on shore waiting to go out.

After a two hour postponement ashore the fleet headed out onto the water and Melzacka, obviously pleased from the smile on her face, described the first win in 29er girl's from her perspective, “I was very stressed waiting on shore. The wind was very strong and we are quite a light crew. But as the wind got lower it was better for us. We work well in about 15 knots, and the first race when we went out was 15 knots so it was perfect in the end.

“We were very happy to win. On the first mark we were about fifth, but we managed to comeback and win. We were really excited about it.”

The Polish girls followed up with a discarded seventh and second place to sit top overall on three points.

Finland's Sirre Kronlof and Veera Hokka occupied the top three in one way or another with a second and two third place finishes which leaves them in second spot.

An eighteenth place for Great Britain's Courtney Bilbrough and Harriet Ward in the first race didn't dent their confidence as they came back to take a bullet in the second race. The third bullet of the day went to Netherlands' Odile Van Aanholt and Ismene Usman. Australians Amelia Stabback and Pia Doyle are in ninth place.

With consistent results, Norway's Mathisen brothers, Tomas and Mads lead the way in the boy's 29er. A bullet followed two third place finishes which leaves them above USA's Romain Screve and Quinn Wilson who had a discarded 12th place sandwiched between two second places.

First bullet of the day went to current third placed pair from Slovenia, Peter Lin Janezic and Anze Podlogar. The other team to take a bullet on day one was Netherland's Cas Van Dongen and Robin Becker who will be disappointed they couldn't break the top 10 in their other races. They sit in sixth overall. Kurt Hansen and James Colley (AUS) are in fourth place.

There is always some one that is happy with the start that they make, and in Langkawi it was Argentina's Francisco Saubidet Birkner who described his as 'perfect'.

If you are being picky, it wasn't a perfect scorecard of three bullets, but in terms of the rest of the field, it was as good as it gets with everyone else having a mixed bag of results. Standing confidently next to his board, job done for the day, Birkner said, “It was perfect. The first race I finished first, second race third and then the last I finished second. The wind was very shifty and difficult but I was fast. I always went to the right side and always had wind so it was a good choice for me.”

At the Nanjing 2014 Youth Olympic Games, Birkner took gold, and he has taken that knowledge and compared it to the Youth Worlds saying, “It is similar to the Youth Olympics. Nearly the same guys with the same level. We all know each other and everyone is together. I like it.”

Birkner certainly does like it as he has taken the knowledge and used it the best in the fleet. His closest rivals are France's Titquan Le Bosq who lies in second and Brazil's Brenno Francioli in third.

Australia's Jock Calvert and Russia's Maxim Tokarev took the other bullets of the day but neither could break the top ten in any of their other races which sees them lay in 12th and eighth respectively.

Determined to hold on to her gold medal from the 2014 Youth Worlds, Russia's Stefania Elfutina finished the day with a bullet and two second places. The competitor may be different, but the country is the same as Elfutina's closest rival is again from China in the form of Xian Ting Huang.

Huang took the first bullet of the day and followed it up with a discarded third and a second to sit jointly on top with Elfutina on three points.

Great Britain's Emma Wilson is on five points in third thanks to a bullet in the second race to go along with her two fourth place finishes.

Australia's representatives have some work to do, with Jock Calvert 12h in the Boys and Emma Baillie 18th in the girls.

If the regatta can be judged on the first day then Australia and USA will be tussling it out all week in the boy's 420. As we know this isn't the case, but Australia's Alec Brodie and Xavier Winston Smith have the upper hand on day one with two bullets.

Following behind in both races with two second places was USA's Will Logue and Bram Brakman who then let the rest of the fleet fight it out behind them.

Rounding out the top three is Singapore's Jia Yi Loh and Matthew Lau who end the day with a fifth and third place in the bag. Finishing third in race one was Ireland's Douglas Elmes and Colin O'Sullivan, but an unlucky 13th in the next drops them down to seventh on the leaderboard.

Jerwood and Smith took a bullet in the second race to follow their fourth while Szmit and Dzik had a second and third.

Rounding out the top three is New Zealand's Kerensa Jennings and Chelsea Rees who have seven points.

The SL16 fleet were unable to race on Tuesday due to a shipping delay in advance of competition.

The full quota of equipment is due to arrive in the next 12 hours with racing scheduled to start at the earliest possible opportunity. The fleet will look to catch up on the races missed, utilising the championships reserve day of Friday 1 January.

Racing continues tomorrow with an earlier start for the sailors to ensure they are on the water before the low tide can take effect and delay the launching.