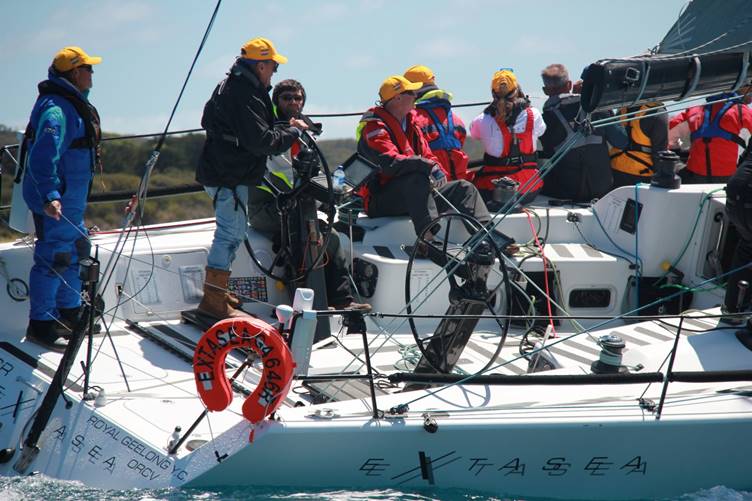 After sailing into a windless hole near Three Hummock Island and Hunter Island yesterday afternoon in the Wyndham Harbour Melbourne to Hobart Westcoaster, EXTASEA (Paul Buchholz) was passed by ONE FOR THE ROAD (Gary Prestedge).

Paul Buccholz is a seasoned campaigner in the Westcoaster and previous multiple winner of the Ocean Racing Club of Victoria’s Offshore Championsip.  EXTASEA’s experienced crew took back the lead late last night off Arthur River on Tasmania’s North West coast.

Conditions for the fleet continue to be mild down Tasmania’s rugged west coast this afternoon in 5 to 15 knot Westerly winds.

EXTASEA still leads this afternoon an is abeam of Port Davey on the South West coast of Tassie.  ONE FOR THE ROAD (Gary Prestedge) is 20 nautical miles behind EXTASEA, with OCEAN SKINS (Tony fowler) a further 25 nautical miles back.  Tony Fowler and his crew onboard OCEAN SKINS were the only yacht in recent memory who elected to go on the West side of King Island on their way to Hobart.  Their tactical decision looked good early as more wind was expected to arrive from the West.  As the fleet converged South of King Island it was clear that OCEAN SKINS did not gain any advantage from that move.

The fleet are in for a slow night tonight as forecast wind speed is expected to drop to 5 to 10 knots from the West.  Concentration in the light conditions will be critical to ensure they gain maximum boat speed.  This year has certainly been one of the mildest Westcoasters for many years, but as anyone who’s done the Westcoaster knows, conditions around Tasmania’s South West Cape and Maatsuyker Island are legendary so the fleet will continue to be watchfull as they round the Southern most tip of Australia.

With the mild conditions experienced to date and expected to continue, handicap winners are expected to come from the smaller yachts in the fleet.