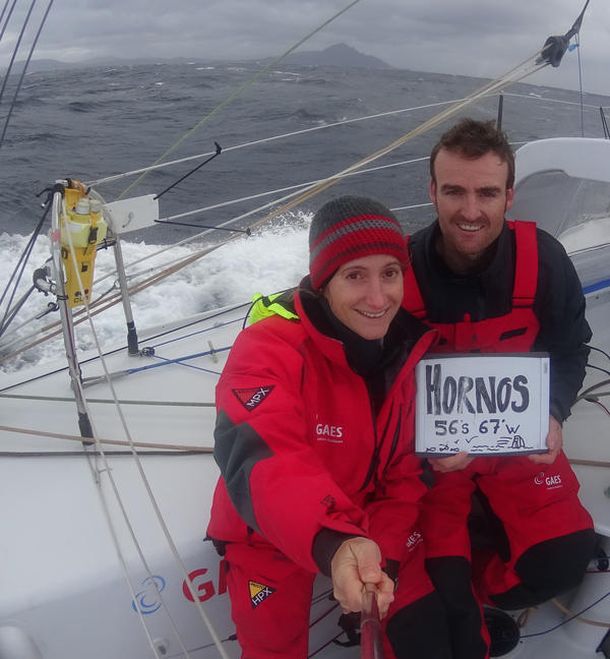 The climb back up the Atlantic is long and can be brutally hard, but usually every mile feels like it is taking you closer to the Barcelona World Race finish. Race leaders Cheminées Poujoulat might be forgiven for feeling that supposition does not fit with their moods today as they are now slanted more east than north, each mile seemingly taking them more directly towards Cape Town than Barcelona. But for the two teams who rounded Cape Horn today, the 'homewards bound' epithet really held true.

At 0212hrs UTC this morning  it was Gullermo Altadill and Jose Munoz who passed 20 miles south of the lonely rock in second place on Neutrogena, some ten hours ahead of third placed Anna Corbella and Gerard Marin on GAES Centros Auditivos.

Neutrogena, in particular had looked set to benefit from being able to sail the most direct course north while Corbella and Marin, who passed Cape Horn at 1232hrs UTC this afternoon, were addressing the dilemma of whether to go west or east of the Falklands . Conseqently Altadill and Munoz were able to snip.

Altadill and Munoz, passing the Cape in the dark, found the Horn baring its teeth, delivering big crossed seas and gusts to nearly 50kts. Altadill, contacted briefly by satphone this morning said:

“It was quite tough rounding Cape Horn, it was quite windy with squalls over 45kts up to 50kts and really big waves, more than predicted. We thought we would only get 35kts and normal waves, but in fact we got huge waves. We had to make a couple of gybes which were in the middle of the night and so that was a bit complicated, so no we are gaining north. Now we are setting up to pass the Le Maire Straits which is another complicated place, still windy, still a couple of gybes to go and a lot current, it saves a lot of miles but it is quite complicated. The last 24 hours have been full on and for the next couple of days we get some SW and W wind so that will be good because we can gain north pretty quick. And then, unfortunately, N'ly winds which mean upwind. At least the next couple of days we can get north straight away.”

It proved a red letter day for the Altadill clan. Guillermo was crossing Cape Horn for the seventh time, lying second in the Barcelona World Race while his son Willy, was part of the MAPFRE crew which won Leg 4 of the Volvo Ocean Race into Auckland today, recording the first stage win for the Spanish boat at the end of the first leg sailed for Altadill junior.

After having had to make three gybes during the last 130 miles Corbella and Marin passed in daylight, just six miles off. For both it is their second time, after successful passages in the last edition. Corbella is 11 days quicker this time than with Dee Caffari – significantly faster even though the course is 2000 miles shorter for the removal Cook Strait from the 2014-15 route – and at this point in the 2010-11 race Marín had only just arrived in Wellington to pit stop with co-skipper Ludovic Aglaor (FRA).

Marín today said: “The feeling that now the worst has passed is, as Bernard (Stamm) said, not true. We have a very complicated week ahead but for the emotional side things do start to feel they are easier now. But once you get past Horn you head home. You know that every day there are fewer miles towards B arcelona and this motivates  you a lot. We will have a lot of upwind now, but right now we're pretty ecstatic”.

Corbella added: “I am delighted. We feel very, very happy. As the last time when we passed it is such a very important place to be, it means a lot of things. I think crossing Cape Horn is like making the summit of a mountain and now we can go home, but a part of our dream is done. Now we have to finish the race, and get home,  but a part of it is already done.

Asked if she feels safer now that GAES Centros Auditivos is out the Big South she said: “It is different. We will see because anything can happen, as we see with Cheminées Poujoulat. They have some big problems sailing in a big gale in the Atlantic but normally things are going to be easier now, especially with the cold. The cold makes everything difficult. And now this is going to change very quickly. And we are happy for that. Also we are closer to land, it is not like being in the middle of nothing. It is quite different. And the other thing is that every mile we sail now is a mile getting closer to home. Mentally that means a not. We have a feeling we are heading home and every mile is in the direction home. That means a lot.”

The next boats to Cape Horn are predicted to pass from the 7th March, with We Are Water leading One Planet, One Ocean & Pharmaton by 176 miles. In turn Renault Captur are 538 miles behind One Planet, One Ocean & Pharmaton. Jorg Riechers and Seb Audigane on the sixth placed Renault Captur have been the quickest boat in the fleet, knocking 60 miles off their deficit to Aleix Gelabert and Didac Costa.