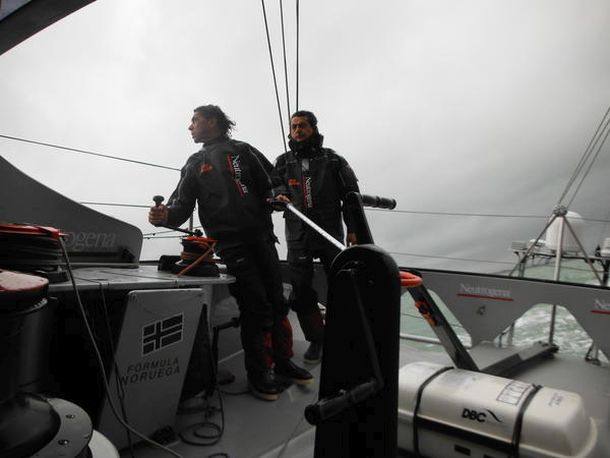 Racing in second place in the Barcelona World Race, the Barcelona sailor Guillermo Altadill and Chilean José Muñoz passed Cape Horn (67° 17' 35 W) this morning at 2h12 UTC (3h12 am in Barcelona, 11h12 pm of the 27th of February in Chile), after 58 days, 14 hours and 12 minutes of racing since their start from the Catalan capital on 31 December 2014.

As they approached Cape Horn Neutrogena had a taste of the authentic experience in winds of 40 kts and big formed waves as they turned to climb the Atlantic. It is the seventh time Altadill has passed the most southernmost corner of the planet, while for Muñoz it was the second time in an around the world race, a very special moment that he dedicated to the late Felipe Cubillos, with whom he completed his first around the world race.

Neutrogena has overcome one of the most dangerous and feared sea passages 73 hours and 19 minutes after the leader of the race, Cheminées Poujoulat o f Bernard Stamm and Jean Le Cam, who are now sailing up the Atlantic.

Guillermo Altadill and José Muñoz fought hard and close to Stamm and Le Cam across the Indian Ocean, but had to make a 24hours pit stop in Bluff, South Island New Zealand, to carry out repairs to their power charging system. Since they restarted into the Pacific they have fought a close duel with rivals GAES Centros Auditivos, Anna Corbella and Gerard Marín, who are expected to pass the mythical cape eight hours after Neutrogena.

On his seventh passage of this infamous, revered rock, for Guillermo Altadill the Cape has lived up to its reputation. “Cape Horn represents the history of ocean sailing,” said the experienced sailor who has completed six round the world races. “It represents leaving behind the Indian and Pacific and beginning the climb North. So far we have done almost five weeks sailing eastward, now we’ll sail to the North, and this changes a lot. The conditions of the South are a little tougher, much more stress on board, when you go north the temperature rises… by comparison it becomes more relaxed.”

Described as “exciting” and “mythical” by Chilean co-skipper José Muñoz, sailing past his home country, the Chilean sailor has dedicated a tribute to his friend and compatriot Felipe Cubillos, who died in plane crash in 2011, two years after finishing the Global Ocean Race with José Muñoz on board the Class40 Desafio Cabo de Hornos: “He motivated me, helped me and encouraged me to fulfill the dream of being able to put a Chilean entry into international races, and now as the only South American in the Barcelona World Race, I feel the responsibility and motivation to encourage more people from my country to enjoy offshore sailing.”

It is anticipated that GAES Centros Auditivos will pass Cape Horn during the morning on Saturday in third place of the Barcelona World Race, and eight hours after Neutrogena. On board, Anna Corbella and Gerard Marín recognized they are already “tired of the Great South” and want to head for “a little more human conditions” after more than a month at sea in the Indian and Pacific oceans.