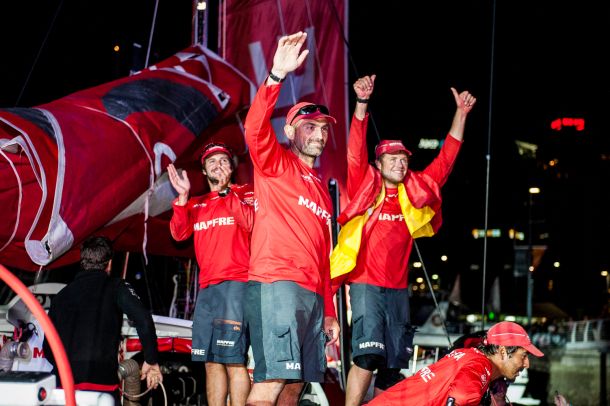 All those wins in the first three stages have been hard-fought but none more so than this latest leg win for the Spanish boat, claimed at 2131 local time/0931 UTC after 5,264 nautical miles (nm) and 20 days, two hours, 31 minutes and 20 seconds of sailing from Sanya, China to Auckland.

Stand-in skipper Xabi Fernández could not have chosen a better stage to guide his crew to victory with just four minutes 25 seconds to spare from Walker’s men, who had the consolation of becoming overall leaders thanks to a better in-port race series record than Dongfeng Race Team.

“We’re super happy to be here, and of course, it was a very tough leg,” said Xabi. “We had a very hard last day especially, but we’re very happy to be here. We have improved a lot over the last two legs. We have a very good team and I hope we can now show to the world what we can do and keep doing it like this.”

Auckland is known as the ‘City of Sails’ and the locals came out in their tens of thousands both on and off the water, fresh from cheering their cricket team to victory over Australia in the World Cup earlier in the day.

For so much of a leg which started in Sanya on February 8, MAPFRE had looked the most unlikely of winners. They lost full communications for three days when a problem emerged with their antennae, which prevented them from receiving full weather data to help them plot the optimum course. This, with the help of the Race HQ technology staff plus partners Cobham, was eventually fixed, but they also suffered a major injury problem on board when under-30 crew member Guillermo ‘Wily’ Altadill (ESP) badly hurt his hand. It was put in a splint and Altadill, 22, will see a doctor on Sunday to discover if he has broken it.

“I’m going to the doctors in the morning – after the party,” he said, the pain dulled by the euphoria of victory.

Walker, meanwhile, will be satisfied with his second runners-up spot in a row, and a fourth podium place. His crew skirmished with MAPFRE all day on Saturday, but could not quite overhaul the Spanish crew despite reducing the deficit to within 1nm at times.

UPDATE: Xabi to hand the helm back to Iker Martinez.

Xabi was savouring a memorable Leg 4 triumph in the Volvo Ocean Race on Sunday, but his stint in charge will come to a halt for the next stage through the Southern Ocean. The 38-year-old Basque took over from his long-term partner and best friend, Iker Martínez, for the last two legs while the latter concentrated on his 2016 Rio Olympics preparations.

Xabi, for so long the right-hand man of his illustrious partner, has clearly not been daunted by the challenge, guiding the Spanish crew to fourth in Leg 3 and then following up with a paper-thin victory on Saturday night on the 5,264-nautical mile (nm) stage from Sanya to Auckland.

He told a press conference on Sunday morning that, despite his success, normal service on board MAPFRE would be resumed when the fleet sets sail for Itajaí on March 15 for the toughest of all nine stages, Leg 5 through the Southern Ocean.

“Iker is coming back,” Xabi told reporters. “He’s flying out on the 6th (March). He’s going to be with us on the next leg, which was always the plan. I am especially looking forward to him coming back. We are already a very strong team with Jean-Luc (Nélias, the navigator) and the rest, but we’ll be stronger with Iker in again, for sure.”

So will he be back for the rest of the race now?

“It depends a lot on how things are going. He has some commitments, of course. For sure, he’ll be doing the next leg and for sure he’ll be doing the cross-Atlantic leg (from Newport). But there’s a question mark for the leg from Itajaí to Newport.”

The six skippers who arrived in Auckland harbour within seven hours of each other in the small hours of Sunday morning, local time, looked remarkably fresh after snatching very little sleep before a press conference attended by the knowledgeable New Zealand sailing media.

Ian Walker (GBR), skipper of Abu Dhabi Ocean Racing, had every reason to look buoyant, despite being pipped into second place by four minutes 25 seconds. Their second successive runners-up spot, however, has given them the overall race lead over Dongfeng Race Team (Charles Caudrelier/FRA), who they beat by under four minutes. Both have eight points but Walker’s men have the advantage thanks to their superior record in the in-port race series where they lead after four races.

Walker outlined a clear, pre-race strategy in October: Finish on the podium in every leg and the chances are you will end up on top come the end of the race in Gothenburg, Sweden, on June 27. So far, he has carried out that plan to perfection with, successively, first, third, second and second places, but he conceded: “The difference between the teams is getting less and less, but our strategy is consistency. However, it if it becomes a two-horse race, it could be the wrong strategy.”

Caudrelier, without wishing to slight Team Alvimedica (Charlie Enright/USA) who won the first in-port race in Alicante back in October, has identified that all crews are taking the inshore series increasingly seriously since it could well break ties by the end of the event.

For Enright, it was another leg of learnings tinged with slight disappointment that his U.S./Turkish-backed boat could not build on their third-placed podium finish in the last leg in Sanya.

“Nobody goes into a leg hoping for fourth place,” he summed up succinctly. “We’ve still got work to do on our boat speed.”

Bouwe Bekking and his team on board Team Brunel are still very much in the hunt for the overall title in third place on 12 points, but the Dutchman was typically forthright in his conclusion of feelings on board the boat following their second fifth place in a row, having triumphed on Leg 2 to Abu Dhabi.

“We feel gutted, not only myself, but everybody on the team,” he told reporters. “We made one mistake – and we paid for it. We had some sickness on board, but that was no excuse.”

For Team SCA (Sam Davies/GBR), it is a familiar story of gradual, but constant improvement, despite again finishing at the end of the fleet. “Results haven’t changed, but we’re improving. We’re almost in contact with the rest of the fleet. We’re learning as we sail next to them,” she said.

She, her crew and the rest of the fleet will now enjoy some well-earned rest in New Zealand’s sailing-mad and most populous city before the action resumes on March 14 for The New Zealand Herald In-Port Race.

The departure for Itajaí, a leg of some 6,776nm, begins 24 hours later on March 15. It is the longest leg of the race and, the skippers agreed, the one that could well point to the eventual destination of the trophy in the race’s 12th edition.