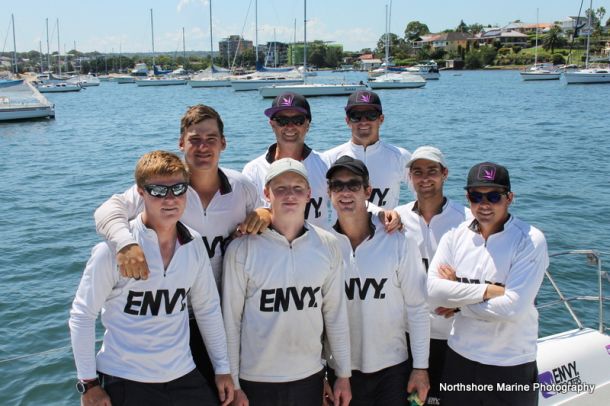 Lake Macquarie once again proved why it’s a favourite location for sailing the Melges 32 class over the weekend for the 2015 Pusser’s Rum Melges 32 Australian Championships, the fifth National Titles held in Australia. Lake Macquarie Yacht Club is the ultimate host; nothing is too much trouble and PRO Andrew Miller and his team of volunteers provided fantastic on water racing, over the three day regatta.

This event was the first opportunity for Barry Cuneo's Envy Scooters and his 50% youth crew from Royal Queensland Yacht Squadron to measure themselves against Australia’s best after competing in the Melges 32 World Championships in Miami last November. Cuneo is a trail blazer in providing opportunities for youth sailors, his admirable efforts provide to encouragement and support to youth sailors in the sport and what better boat to sail than the Melges 32, where teamwork, consistency and on water performance combined with awesome rides and super close racing keeps them hungry for more.

Cuneo commented in his victory speech that there was a team behind this win and thanked all his crew and fellow competitors, namely Chris Way Easy Tiger who provided a tuning partner and shared his M32 knowledge prior to their worlds campaign. Cuneo also commented that “the Worlds was an invaluable experience for his team”. He also returns to Royal Queensland Yacht Squadron with the Melges Asia Pacific Cup, after the culmination of results throughout the season’s regattas. The Cup was filled with sponsors prize Pusser’s Rum and coke by the crew during the celebrations.

Envy Scooters led the regatta into day three ten points ahead of Jon Green Crusader on equal points with Gus Reid Maxstar both one point ahead of Chris Way Easy Tiger. Day three the PRO found it difficult to find consistency on the course and ran two shorter races, before the boats returned to the dock to watch the view of the Southerly front building overhead as they packed up.

Envy Scooters took their foot off the pedal on day three, allowing Maxstar a win in race seven and Jon Green a win the final race of the series.

The camaraderie and teamwork was evident on board Envy Scooters as the crew enjoyed their win with congratulations from fellow competitors and the Melges 24 fleet before being thrown in the water.