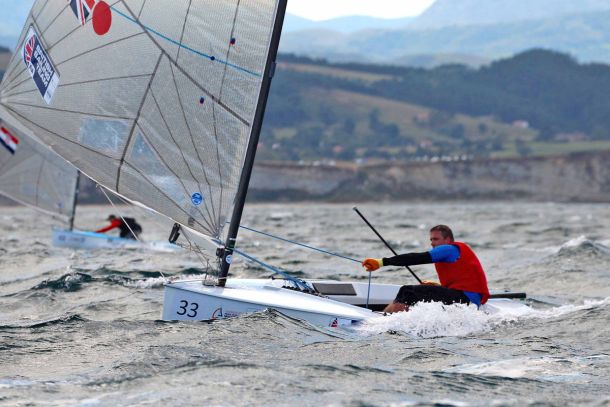 A solid performance of podium positions over the past 12 months has left Finn sailor, Ed Wright (GBR), as the ISAF World Ranked No. 1 as he heads into this week's Finn European Championship in Split, Croatia.

Wright has now been sailing Finns for just over 10 years, stepping into the class in late 2004. He quickly found his feet, winning the Europeans in Spain in 2006 and then the Finn Gold Cup in 2010.

Widely renowned as one of the fittest Finn sailors on the circuit, now, 37, he remains one of the best Finn sailors in the world, and also now one of the most experienced. His age has not stopped the results coming, with podium places at most major championships over the past few years, and he sets a level of physical and technical preparation that many of the younger sailors aspire to.

Going into this week's European Championship in Split, he is ever confident about his progress and training. “It has been a light week of training so everyone hopes some wind might come in. Not long ago, in 2010 we had the Europeans here, where it was a head to head with Ivan Kljakovic Gaspic in the medal race. This time I will do my best to come out on top. There are so many names to list who are threatening for the title next week, including the Hyeres top 10, Vasilij Zbogar, Zsombor Berecz, Ivan, Milan Vujasinovic, Josh Junior, Ioannis Mitakis and so many more that have made big improvements.”

“Having said that Giles [Scott] will not make the trip down here. It is a tough fight with him for the British Olympic spot and he has also had great results, but we will see how the coming season pans out. It is a long time until the Gold Cup in New Zealand with everyone pushing harder and harder. It has the potential for some captivating rivalry to follow, as there is still lot of scope for big improvements from everyone before Rio 2016, which is still over a year away.”

Wright has had a busy winter. “It was no easy task to fit Dragon sailing and coaching around the already demanding schedules of Finn sailing and strength work. I also had the opportunity to trial out in San Francisco for America's Cup holder Oracle Team USA, which was an eye opener and I would like to do more of that in the near future. After that, in the spring, I was down in Valencia, Spain working on a few technical projects and as a result my rig is looking great now. I think I am one of the few using a Concept mast these days and have been working on a good sail combination that works best. As you push one area something else suffers and I think that is no exception with the rigs so it is a constant compromise.”

“Technically in the Finn class there is a lot happening. New manufactures appear and also Devoti have come out with a new shaped Finn, which is meant to be a big improvement. Only time will tell in this exciting developing phase.”

As one of the older sailors in the fleet he has had to adapt his training programme to suit the extreme physical demands of the Finn? “Physically I have to train smarter now with the correct recovery to stay ahead of the field. I cannot just go and hit intense workouts multiple times a day like I used to, but all in all my fitness has improved. Now I have learned to train more efficiently and I do exactly what my programme and coach request of me.”

As usual for a top athlete he has a lot of support behind the scenes. “UK Sport and Volvo Cars are the main contributors making my programme possible. I have taken big steps forward since last year and on top-mark-rounding I would have won the Sailing World Cup in Hyeres. There is still space for improvement, so I am focusing on embracing that. Working toward Rio 2016 and the World Championships at the end of the year is the biggest target and it will take time and self-discipline, but I will be ready.”

He is philosophical, and objective, about his new status as World No. 1. “Ranking World No. 1 is a great accomplishment, but like with most things it is only the tip of the iceberg. After ISAF changed the format we all had to adapt to the changes. I feel all my struggles and hard work have paid off and I am able to be on top.”

Racing in Split begins on Tuesday 12 May and continues through to the Medal Race on Sunday 18 May. If recent form is any indication, Wright will be fighting hard for the the gold medal right to the last.