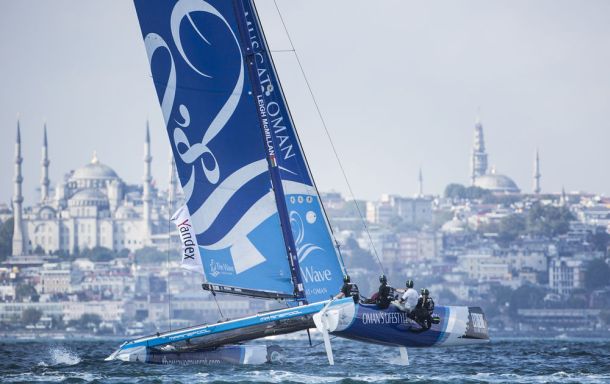 Leading from race one, The Wave, Muscat’s total domination of the Extreme Sailing Series Act 7, Istanbul presented by Yandex came to a crescendo today with one of the most impressive results in Series history.

After 31 hard-fought races over four days at the mouth of the Bosphorus, British helm and two-times Series champion Leigh McMillan led his crew to an impressive 25 podiums. McMillan, Sarah Ayton, Pete Greenhalgh, Ed Smyth and Nasser Al Mashari averaged 9.1 points per race, the highest at an Act since the beginning of 2013 according to SAP Analytics, and winning 40% of the races.

Even with a broken jib halyard in the penultimate race stopping play for the Omani team, the fleet could do nothing but watch, as McMillan took the Act victory with an outstanding two races to spare.

“It’s so satisfying when it gels and it all works so nicely. When the conditions are this good you can’t help but love winning,” said McMillan on the dock after scooping up the Land Rover Above and Beyond Award for the team’s efforts.

With the top spot in Istanbul out of reach early on, the battle for second and third was fierce.

Stepping up to the mark, the underdogs Oman Air, with skipper Stevie Morrison on the helm, delivered the excellent form they have only shown glimpses of all year.

Racing consistently throughout the week, and winning the final double-points race, Morrison and his crew sailed their way to a well-deserved second place. The delighted skipper commented: “What a result. Our first podium this season and it feels really good. We’ve been nearly there a couple of times but nearly there isn’t good enough. I’m ecstatic it all came together today.”

Fighting Oman Air for second place until the closing moments of the Act, SAP Extreme Sailing Team finished in a respectable third, a solid confidence boost going into the final regatta of the year in Sydney in December.

“It’s good to know that when there pressure is on we can keep it together and keep pushing hard. Let’s see what happens in Sydney,” remarked co-skipper Rasmus Kostner.

A final day push from new helm Pierre Pennec saw Lino Sonego Team Italia jump up the leaderboard to fourth ahead of GAC Pindar in fifth and Red Bull Sailing Team in sixth, after missing seven races on day two following their dismast. Putting in an excellent performance with their new all-Russian crew, Gazprom Team Russia rounded up the leaderboard in eighth.

But stealing the show were hometown heroes Team Turx, who over the course of the weekend crossed the line to cheers from 20,000 spectators sitting in the sunshine front row on the Kadikoy waterfront.

Going into the 2015 Extreme Sailing Series double-points final Act in Sydney, The Wave, Muscat has an 11-point cushion at the top of the ranking after winning five events on the eight-Act global tour.

Hoping to challenge them for the Series title, SAP Extreme Sailing Team and Red Bull Sailing Team will need to find another gear as McMillan and his crew continue to demolish the opposition.