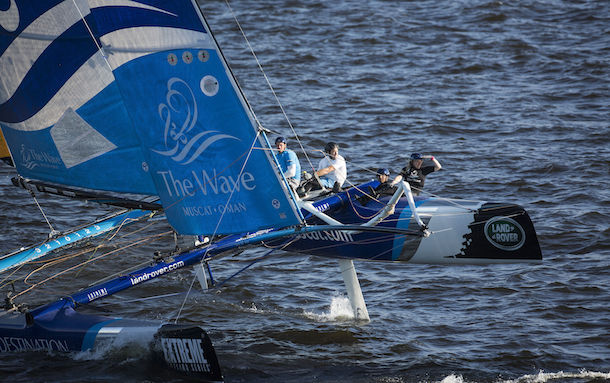 Day two of the Extreme Sailing Series™ Act 6, Saint Petersburg presented by SAP delivered a mixed bag of results for all eight international teams, as the hidden currents of the River Neva delivered a race track riddled with passing and losing lanes – with big wins, and even bigger loses to be had.

Mastering the light winds and strong current was no mean feat, but Leigh McMillan and his team on The Wave, Muscat took it in their stride. Three race wins saw the Omani crew clock up an impressive 68 points and an average 8.5 points per race according to the SAP analytics , to gain control of the leaderboard.

McMillan’s experienced crew, including British tactician and double Olympic gold medallist Sarah Ayton pulled on their wealth of experience as a two-times Series winning crew, and played the conditions right.

“It was what I call a puff and patch day today,” reflected Ayton. “Having to sail really aggressively into the next manoeuvre and being really proactive around the track.” The team close the day on 120 points, taking the overall lead from Austria’s Red Bull Sailing Team on 114.

Lino Sonego Team Italia were able to match their impressive performance from day one, winning two of the day’s eight races, which was enough to hold off the onslaught from SAP Extreme Sailing Team and Gazprom Team Russia, the three teams trading places on the leaderboard with almost every race. The Italians round up the day in third place overall, but tied on points with the Danes. “This is a dream for us, we really hope we can keep this position until the end of the event,” explained Enrico Zennaro, who has inherited skipper duties this week, on the dock.

Sitting fifth overall on 99 points the local Russian team are perfectly poised to pounce, but are feeling the pressure: “It didn’t feel like we got a break today when we usually get a few. We just battled at the middle of the pack, putting on a string of fifth places which isn’t really ideal,” commented helm Phil Robertson.

10 points back is Oman Air who hit form late in the day with two second places, with GAC Pindar another 10 points behind them. In eighth place, but narrowing the gap after a win in the opening race of the day, is Team Turx.

Racing continues tomorrow with live coverage from 16.00 (GMT+3) on www.extremesailingseries.com/live