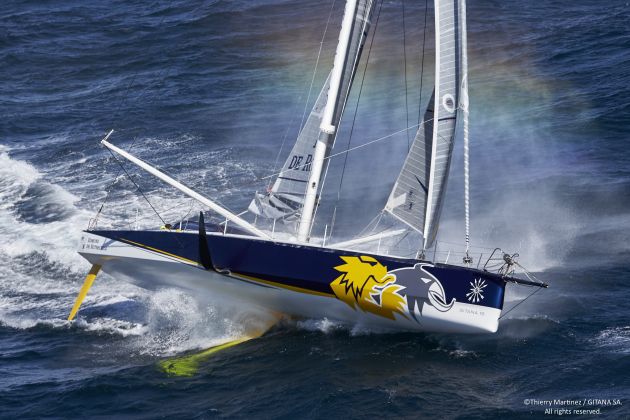 It remains a valid question some 24 hours before the start of The Transat bakerly. The weather appears to be somewhat clearer now, but the latest forecasts, analysed this morning, are complicating matters. The fleet is due to set sail tomorrow, Monday, at 14:30 GMT+1 from the typically English port of Plymouth bound for the skyscrapers of Manhattan. When people refer to the course, even in the month of May, the solo sailors tell of violent lows, a poor sea state and icebergs as they approach the Grand Banks of Newfoundland… As such, the strategic choices are of great importance.

Sébastien Josse, skipper of the Mono60 Edmond de Rothschild, can count on the top-flight experts within Gitana Team. These include, Charles Caudrelier, an experienced sailor and racer both in crewed and solo format, with whom Sébastien notably won the Transat Jacques Vabre in 2013 aboard the Multi70 fitted out by Baron Benjamin de Rothschild’s racing stable. A member of the five-arrow team’s performance cell, Charles gives us his analysis of the situation from Plymouth some 24 hours from kick-off, whilst the skipper talks to us about the competition.

Contrary to a classic course that ends in the tradewinds, the 3,000-mile course between Plymouth and New York, will be sailed in varied weather all the way to the finish. The strategists have been working hard to anticipate what lies ahead, however there will be untertianties sailing along the US coastline to the finish.

“For some days, the weather models in the North Atlantic seemed to favour a southerly course but this morning the situation has changed. There are now several possible courses, including a rather brutal one to the North,” explains Charles Caudrelier. “The very extensive exclusion zone, defined by the race organisation to avoid the icebergs in Newfoundland, inevitably has an influence on strategy because the sailors will have to slip under it and it’s already a long way South.

“Today, there are two major lows to be negotiated along the way. The first will roll through on Tuesday and Wednesday and is active and windy with 40 knots forecast, while the second could be negotiated via the North, though that option comes with the risk of getting trapped in the centre in order to get around the exclusion zone. As such, you have to choose between hunting down the strong wind to the North in some really tough conditions or try the South with what is a complicated route to pull off in solo configuration. Today, there’s also an intermediary option taking shape, but how will that play out tomorrow? We’ll know more this evening and then it’ll be over to Sébastien to decide.”

The first few hours of racing

Due to the tides, the monohulls will leave port tonight, between 01:30 and 02:00am local time for Edmond de Rothschild. Charles will be manoeuvring with David Boileau and Pierre Tissier, two key members of the Gitana Team shore crew, whilst the skipper racks up some precious hours of sleep and then joins the boat later in the morning. The weather will immediately set the tone with a front expected to roll through around start time. The south-westerly wind of around twenty knots or so is expected shift round to the north-west as it eases.

“It will be necessary to put in good tacks to negotiate the wind shift, then there will be a ridge of high pressure to get through,” Charles continues. “Right now, the tidal coefficients are low so there is a weaker tidal stream. However, we’ll have to wait and see whether or not the sailors decide to go and play with the Cornish headlands. From the first few hours of racing, play is likely to be governed by the actions of the rest of the fleet. Everyone will be watching each other and we’ll soon see some options taking shape.”

Sébastien Josse is taking the start of The Transat for the third time. Each time, the sailor has competed in the IMOCA monohull class just a few months shy of the Vendée Globe event (start on 6 November 2016), which naturally ups the stakes. Finishing the race without breaking so as to confirm the design options and the technical choices whilst sizing up the competition are just some of the numerous expectations that colour this race.

“Small line-up, high standard… quality over quantity!” Sébastien jokes as he describes those competing in the IMOCA class. Six 60-foot monohulls, with the perfect balance of boats with classic, straight daggerboards – the so-called former generation – and those with foils, which are breaking new ground within the class and are, unquestionably, part of its future. For now though, given the youth of the ‘new wave’ and the reliability that such craft call for, the bid for the podium places is still wide open and the ‘elders’ retain the advantage thanks to all the miles they’ve amassed.

“The class has some reference boats from the former generation with PRB and SMA (ex-MACIF). Of this pair, Vincent Riou inevitably has the edge, not just because his boat is a lot more tried and tested with some eight years of fine tuning to its credit, but also as a result of the sailor’s experience. Added to this, skipper Paul Meilhat is making no secret of the fact that his objective is more geared towards qualifying for the Vendée Globe. As a result, the real contender today is Vincent!”

“Following on from that, on the other hand, we have the foilers…and here anything is possible! The skipper of Banque Populaire has shown himself to have some real talent by finishing 2nd in the Transat Jacques Vabre last year so Armel is a very good sailor. St-Michel Virbac is a sistership to our boat, with an identical hull below the waterline, but not the same generation of foils. It’ll make for a very interesting battle. Fine tuning is all part of the game and we have great expectations with regards to the performance of our boats. It’s only their second race and their versatility obviously relates to their reliability. The primary objective of this transatlantic is naturally to come and test all that with the pressure of the racing environment against a boat that is the current reference, namely PRB.”