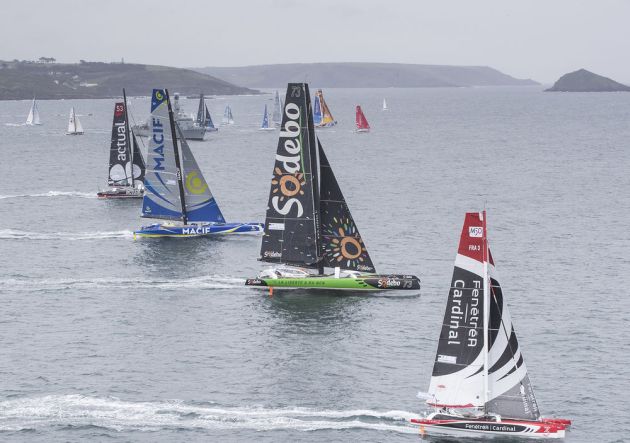 The 25 boats in The Transat bakerly 2016 fleet set sail today on one of the great races in solo sailing, the 3,050-nautical mile passage across the north Atlantic from Plymouth to New York.

Spectators both on shore and on the water turned out to watch as the mainly French fleet gathered under grey skies on Plymouth Sound to answer the starter’s gun fired from the decks of the Royal Navy frigate HMS Kent at 14.30pm.

Ahead of the solo skippers and their boats lies one of the most daunting challenges in professional sport – the north Atlantic, complete with bitterly cold storm force headwinds, an ever-present adverse swell, freezing fog and even the danger of ice.

The forecast for this year’s race – the first time this classic has been staged since 2008 – is for a reasonably quiet start but for 45-knot headwinds and big seas for the leading yachts by Wednesday, as they head into the Western Approaches.

The fleet is divided into four classes, each of which will produce an official winner of The Transat bakerly. The fastest boats are the giant trimarans of the Ultime class, three of which are battling it out for line honours, with the first expected to reach the finish at New York in around eight days.

Behind them comes the five-strong fleet of smaller Multi50 trimarans which could fly across the “pond” in 12 days, alongside the six IMOCA 60s – the state-of-the-art monohulls used in the Vendée Globe solo round-the-world race that starts later this year.

The slowest boats will be the smaller monohulls of the 10-strong Class40 fleet which should take around 15 days to complete the course, but in which we should see some of the tightest racing.

Alongside the fleet is a one-off entry by the French racing legend Loick Peyron who is sailing Eric Tabarly’s 44ft wooden ketch Pen Duick II in the same trim as she was when Tabarly raced her to victory in The Transat (then called the OSTAR) in 1964. Peyron is expecting to take around 27 days to reach the finish at New York.

Among the first to show in 10-12 knot southwesterly breeze, as the fleet headed out to sea, was the Multi50 Fenêtrea-Cardinal skippered by Frenchman Erwan Le Roux who ripped across the startline flying-a-hull ahead of two Ultimes, the bright green Sodebo skippered by former Volvo Ocean Race winner Thomas Coville and the blue-hulled MACIF, skippered by François Gabart.

Several skippers were caught out by the lighter-than-forecast conditions at the start and were hastily shaking out reefs as those with full mainsails took advantage. Among the quickest away was Armel Le Cléac’h on the IMOCA 60 Banque Populaire VIII who flew out of the blocks and established an early lead.

The IMOCA 60 class will see a fascinating battle over the next two weeks between the three entries with foils – Banque Populaire VIII, Edmond de Rothschild (Sébastien Josse) and St Michel-Virbac (Jean-Pierre Dick), and those with more conventional underwater profiles – PRB (Vincent Riou), SMA (Paul Meilhat) and 44 (Richard Tolkien). The foilers may well be quicker but will they be tough enough to last this toughest of courses?

Earlier there were pre-start nerves on a damp and overcast Monday morning as the skippers enjoyed a final big English breakfast and prepared to depart from Plymouth’s Sutton Harbour Marina and Plymouth Yacht Haven. Sébastien Josse was in a realistic mood about what lies ahead.

“I am in the mindset of someone who is about to experience very demanding times physically and mentally,” he said. “The Transat bakerly is not much fun but I am very happy to be here. I know I am going to be cold and it’s going to be tough, but I know why I am doing it. I want to do well and I am just thinking through all the things I must not forget and the mistakes to avoid.”

His fellow Frenchman Armel Tripon on the Class40 entry Black Pepper also talked of the jitters as he prepared to take on the north Atlantic. “Although I slept well I feel I have a little ball of nerves in my stomach but it will disappear once I am on the water,” he said.

Like all the skippers, Tripon was eyeing the forecast and trying to assess his routing choices, whether to head north or south once clear of the southern Irish coast. “It is not obvious – there is a strategic choice to make at the outset,” said Tripon.

Hervé Favre, Event Director commented: “This race is one of the classics in solo sailing and after it was not staged four years ago we at OC Sport are proud to relaunch it this year. I am delighted to see this hugely competitive fleet of sailors on state-of the art racing machinery now taking on The Transat bakerly 2016 and we wish them all the best for the undoubted challenges that lie ahead.”

So fasten your seatbelts, this promises to be a wild ride across one of the most notorious stretches of water on the planet – the 2016 Transat bakerly is underway.

Find out more about the race here.