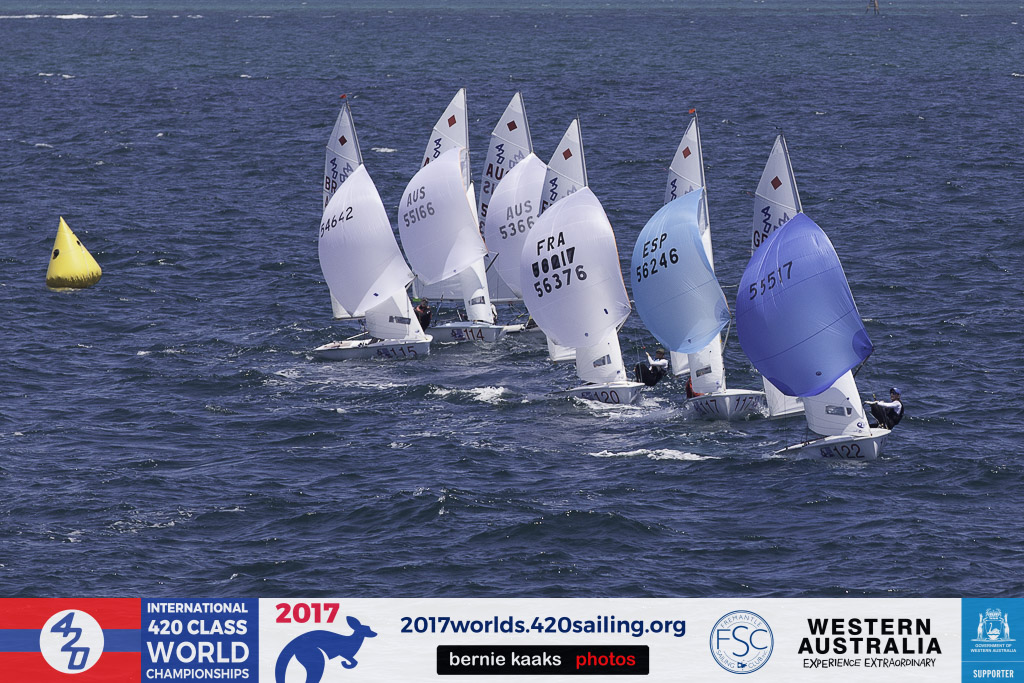 Much lighter conditions in this afternoon’s 420 World Championship at Fremantle might have produced some different results, but those who expected a break in the Spanish dominance of the event so far would have been disappointed when Spanish boats finished first second and third in the last race.

Antoni Massanet was over the moon at the end of today’s racing. “We are really happy. We’ve got the Spanish teams going on the podium and we are going to try to win the championships. We are really excited to be first (on points).”

On the subject of weather conditions, he was one of the few visitors who considered it beneficial. “We prefer the strong winds, also like the first one (when the wind blew at 24 knots). We are not so used to sailing in winds like today.”

Carlos Balaguer and Antoni Massanet started the day with a three point buffer over second place and despite a twelfth in the last race, which they were able to discard, they extended that to four points over compatriots Albert Torres and Francisco Mulet. Australia’s Chris Charlwood and Josh Dawson had a forgettable day with a fourth and a disastrous 27th in the final race. Due to equipment failure they missed a race yesterday so they have to include today’s placings in their total score, slipping down to seventh overall.

The ladies division is still remarkably close with Australian teams Nia Jerwood and Monique de Vries retaining their overall lead over Laura Harding and Ellie Grimshaw in second place, just three points adrift. The Spanish team of Pilar and Maria Caba is third, but 19 points behind second place, so they have a daunting task ahead of them.

Allesandro, who has seven crews from three nations in his care (France, Italy and Argentina) was very happy with their performances so far. “They are going very good. They are enjoying the championship and doing very well.” On the weather: “ Yes, yes, we prefer winds like this because we are not so heavy.”

To try to predict the outcome of the Under 17 division is akin to trying to pick a lottery winner. Only twelve points separate the first five places. Third placed Martin Wizner and Pedro Ameniero have won their last three races in succession in a variety of wind conditions and if they can emulate that performance on tomorrow’s final day, can still displace Italians Demetrio Sposato and Gabriele Centrone who currently hold the lead.

Another fresh day is forecast for the final day of racing tomorrow, promising more action aplenty on the waters off Fremantle.