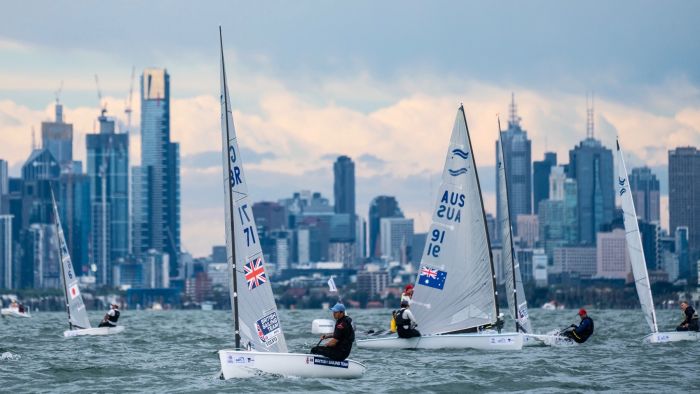 The Sail Melbourne – Summer of Sailing 2020 count-down is on with only three weeks to go to the start of an exciting series of world-class sailing in Australia this summer.

Seven months out from the Tokyo 2020 Olympic Games, Melbourne’s Port Phillip from Sorrento all the way around to Geelong will come to life with a series of Olympic class sailing events over the entire summer, including six World Championships (December 2019 – March 2020) as well as two Oceania Olympic qualifiers.

In the lead-up to the Tokyo 2020 Olympic Games, Melbourne will be the place to be for all those aspiring for Tokyo gold, but also all those others wanting to come and escape the long cold northern hemisphere summer either as a bucket list sailing destination or to maximise their training for Tokyo.

This is reflected in an impressive line-up of Olympians and World Champions who have already started to arrive in Victoria over the last couple of weeks with the world championships series to start in December.

The Olympic Finn sailors will be first up with the 2019 Finn Gold Cup, the world championships of the Olympic Finn class, kicking off the series of Olympic class sailing events on Port Phillip in just over three weeks (13-21 December 2019).

60 sailors from over 20 countries including multiple Olympians and six out of the current world top ten Finn class athletes have already confirmed their entry for the world championships that will be held at Royal Brighton Yacht Club.

Britain’s Olympic champion Giles Scott as well as world #2 from the Netherlands Nicholas Heiner are spearheading the event and will be up against stiff competition, including amongst others current world number three Anders Pedersen from Norway, the winner of the “Ready Steady Tokyo” test event and 2018 World Champion Zsombor Berecz from Hungary as well as New Zealand’s world-class Finn duo of Andy Maloney and Josh Junior, who will all be vying for the world title.

International stars have also started to arrive for Sail Melbourne International and the Laser and Laser Radial World Championships in Sandringham in January with sailors to make the most of the Southern Hemisphere summer and take advantage of the competition and training opportunities in Australia between now and March 2020 and in the lead up to the Tokyo Olympic Games.

Among the Olympic Laser class competitors for the Australian Championships and Sail Melbourne, which both take place in January, are 2016 Olympic Champion and 2017 World Sailor of the Year, Marit Bouwmeester from the Netherlands as well as 2016 World Champion Alison Young (GBR).

“We are very excited about the amazing sailing series that is the Sail Melbourne – Summer of Sailing 2020 and we are looking forward to hosting Australia’s and the world’s best sailors in Victoria over the next few months. Australia has been a world class sailing country for decades with our sailors making headlines round the world and it is very exciting to see them compete on home waters just seven months out from Tokyo 2020 Olympic Games,” Australian Sailing President Daniel Belcher said about the event.

“The Sail Melbourne Summer of Sailing shows that we have some of the world’s best sailing territory, world class race management, clubs and volunteers right here at home with many of our international sailors returning competitors, who will make the most of our southern hemisphere summer.

“The event series will also offer a brilliant opportunity for sailors from around the country to take on the world’s best sailors, hopefully also secure Australia a couple more spots for Tokyo 2020 and inspire the next generation of sailors, who will be able to battle it out on the same race track as their Olympic heroes.”

The Sail Melbourne Summer of Sailing is expected to be the largest of gatherings of Olympic and international sailors ever in Melbourne with over 2,000 participants plus more than 2,500 affiliates expected to visit Victoria.

Sail Melbourne International (SMI) is open to all Olympic sailing classes and sailors from around the world contesting the 2020 Summer of Sailing are expected to attend to make the most of Australia’s summer in preparation for the 2020 Olympic sailing season.

For 2020, Sail Melbourne International will also be acting as the Oceania Championships and Oceania Region Olympic qualifier for the Lasers with Australia already having secured both quota spots and with Matt Wearn (WA) selected as the Laser sailor to represent Australia in Tokyo next year, while the women’s Laser Radial is yet to be decided.

The 2020 Sail Melbourne International regatta will also include the Australian Kite-Foiling Championships, the class that will premiere on the Olympic program in Paris 2024.

In addition, the regatta will see Australia’s best para-sailors battling it out for national championships glory with Australia’s top sailors having confirmed their entries.

Sail Melbourne’ s Youth Classes will be incorporate into the Australian Youth Championships from the 10 -14 January, 2020 at Sorrento.

For more information on the 2020 Summer of Sailing see the website here: https://www.summerofsailing.org.au

Melbourne’s Summer of Sailing 2020 and the 2019 Finn Gold Cup is proudly supported by the Victorian State Government.

About the Melbourne Summer of Sailing 2020

The 2019 Finn Gold Cup will be the start to Melbourne’s 2020 Summer of Sailing with Port Phillip Bay hosting a series of Olympic class World Championships over the months December 2019 to March 2020.

The world class event kicks off a series of Olympic sailing events on Port Phillip Bay with the club also hosting the 2020 Sail Melbourne International regatta in January (17-21 January 2020).

The Finn Gold Cup will be followed by Sail Melbourne International, Victoria’s premier event for Olympic class sailing. In February, the Laser and Laser Radial World Championships are coming to Sandringham Yacht Club, while the 49er/FX- and Nacra World Championships will be hosted by Royal Geelong Yacht Club.

In addition to these ten pinnacle Sail Melbourne Summer of Sailing events there will be over 20 supporting events taking place around the bay over the whole summer.  These include the RS:X World Championships at Sorrento in March as well as Oceania and National Championships in many of the Olympic, youth and junior classes as well as practice and world championship warm-up events.