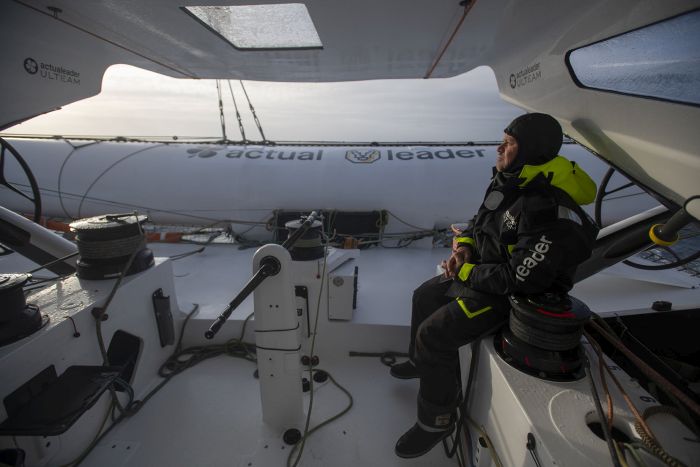 After just over 15 days of racing, Maxi Edmond de Rothschild, the leader of the Brest Atlantiques fleet since Rio, will reach the second and final race marker of the course, Robben Island. MACIF and Actual Leader are hot on their heels, promising an exciting return back to Brest. Sodebo Ultim 3 will have to make a pitstop in Cape Town to assess the damage caused by the loss of the rear of its starboard float.

François Gabart (MACIF team) summed up his thoughts on this exciting race: “The four boats are experiencing a rather unprecedented scenario, after more than fifteen days of racing, the four boats are very close. It is a nice surprise at this stage in the race.”

After more than 8000 miles covered, at 3pm today there was just 216 miles between the leader, Maxi Edmond de Rothschild, and the fourth boat, Sodebo Ultim 3. At the start of the race on 5th November, very few would have imagined that the race would be this close as they approach Cape Town.

With just a couple of hours between each boat, the leader, Maxi Edmond de Rothschild, is expected this evening at around 7pm. Franck Cammas described their approach to Cape Town: “As we arrive from the south, we're going to follow the coast to Table Mountain, we will see fantastic views, I hope we can enjoy it as seeing land is obviously very rare in offshore racing. In addition, we are very fond of Cape Town, Charles and I stopped there on the Volvo Ocean Race. However, we hope we don’t have to stop there, as we are planning to head towards Robben Island before heading north and finding slightly milder latitudes.”

At the 3pm rankings, trimaran MACIF was 90 miles behind the leader. They are expected to reach Robben Island 3-4 hours later, followed closely by Actual Leader who have managed to catch up due to the other boats having to make pitstops. Ever since the beginning, Yves Le Blévec and Alex Pella have prided themselves in the reliability of their boat, never giving up even when they were more than 500 miles behind the leader.

As for Thomas Coville and Jean-Luc Nélias, they should arrive in Cape Town on Thursday morning where their technical team will then be able to climb on Sodebo Ultim 3. Once alongside, they will reach onto the rear float to assess the damage and the possible repairs to be made.

Thomas Covlile explained today in a video sent by his media man, Martin Keruzoré: “We will review the state of the boat in Cape Town. Despite the damage, the boat is still in great condition, and we feel confident in its ability to complete the second phase of the race. After the repairs, we must weigh up the pros and cons of how we will go about leaving Cape Town.”