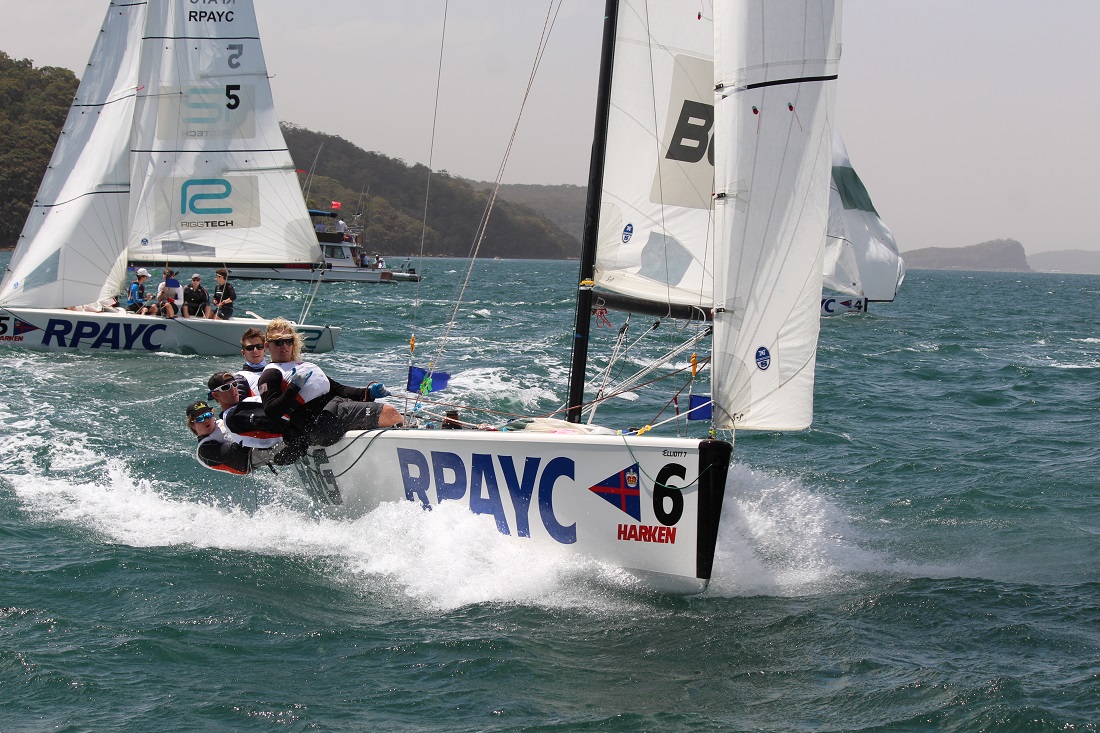 An international cast will take to the race course on Pittwater for the 27th Harken International Youth Match Racing Championship, to be hosted by the Royal Prince Alfred Yacht Club (RPAYC) from 20-24 November, 2019.

An even split of Australian and international teams will be in line for a cash price of $1200 to the winning team, $800 for the runner-up, while $500 will go to the most improved.

A Royal New Zealand Yacht Squadron team, skippered by Jordon Stevenson, took the trophy home last year. Be warned, the home of the America’s Cup is back to compete with two teams whose skippers are Robert McCutcheon and Alastair Gifford.

However, the top ranked crew is that of Wales’ Penarth Yacht Club. Matthew Whitfield’s team is 20th in the official World Sailing Match Racing Rankings, followed by an Australian team from the Cruising Yacht Club of Australia, skippered by Hugo Stoner, ranked 103rd.

Other clubs represented include two from the host, RPAYC, to be skippered by Juliet Costanzo and Alistair Reed respectively, with one each from Royal Sydney Yacht Squadron (Jed Cruickshank) and Darwin Sailing Club (Finn Niemeier).

In a major coup for the event, after registration and practice racing on Wednesday 20 November, special guests Tom Slingsby and Ky Hurst will put in an appearance at the Welcome Function where they will take part in a Question and Answer session on SailGP.

Slingsby and his Australian SailGP crew, including Hurst, won the inaugural SailGP this year and the pair is looked up to by sailors around the world for their various sporting achievements.

The event highlights where this current group of youth sailors can end up down the track. It also supports the importance of encouraging youths to continue on with competitive sailing and to dream big, as did previous competitors who have gone on to carve a name for themselves.

The function will be held at the RPAYC from 6-9pm and is open to members and guests. Bookings can be made via the Club’s Reception on: 9998 3700.

Harken’s Australian Managing Director, Grant Pellew, says: “We’ve sponsored the regatta for a long time now. For me personally, I’ve always enjoyed being out there watching all the racing, even before I started at Harken and I feel it is a privilege to be a sponsor of it.

“I like watching all the young sailors coming through; a lot have gone on to bigger things, such as the America’s Cup, SailGP, Volvo Ocean Race, offshore racing, Olympic Games, or joining the World Match Racing Tour. It’s not just the sailing side either; a lot of others have gone on to work in the marine industry and made a name for themselves in the top jobs,” Pellew ended.

The Harken International Youth Match Racing Championship could not be made possible without the assistance of some two dozen volunteers, local members, as well as the international and national umpires.

Special thanks to Harken, a leading manufacturer and marketer of quality sailboat hardware and accessories, which continues to support this event for a 22nd year.

For all details, please visit the official website: www.intyouthmatchracingchampionship.com.au