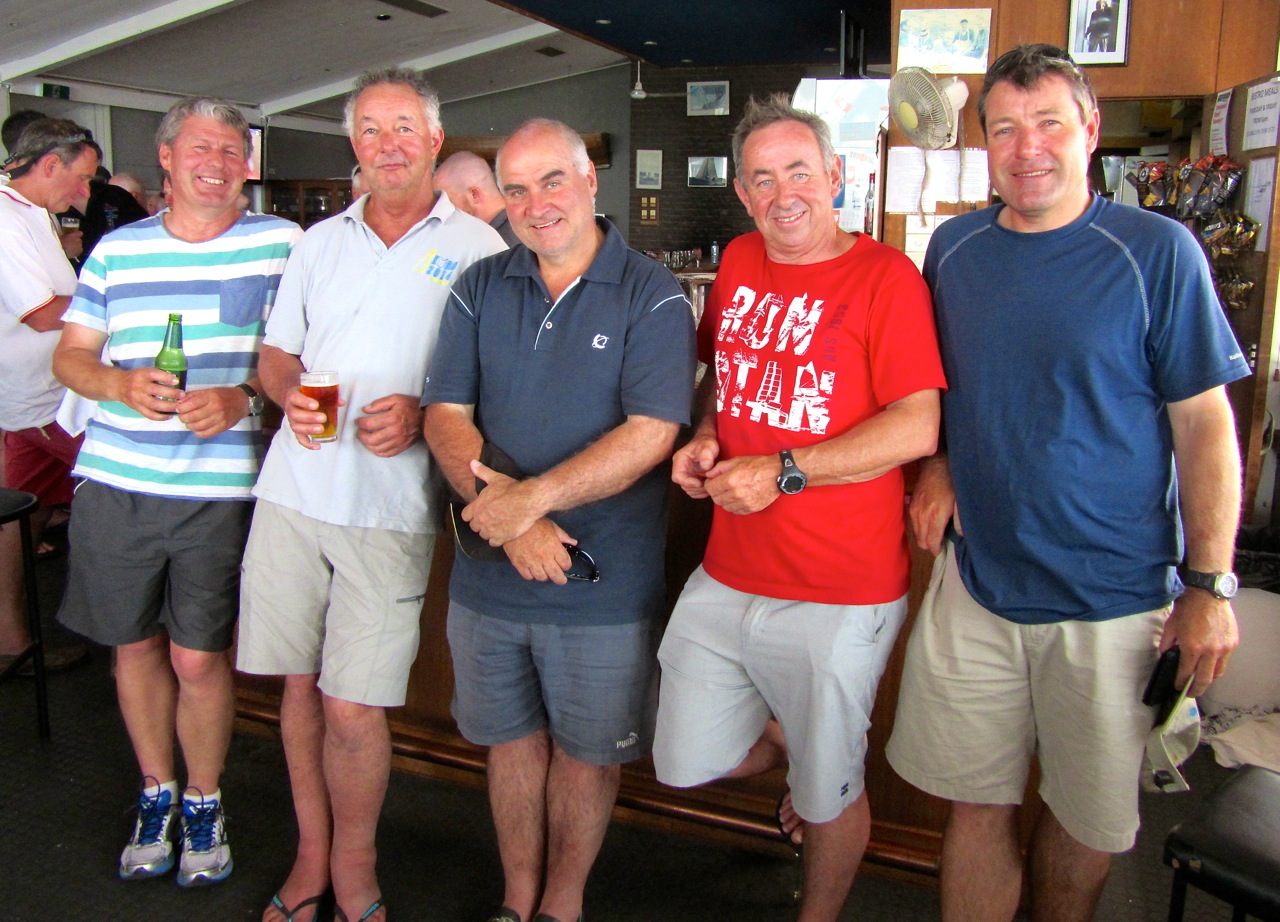 An OK Dinghy World Championship is always so much more that the pinnacle event in the class. It is also an annual gathering of old friends from across the world, almost a pilgrimage that keeps the class enthusiasts coming back year after year. While some sailors find it hard to ignore the OK call, competing every year for longer than they can remember, a number of sailors in Black Rock this week have made a return to the class they once loved and are having another crack at the world title.

For some of the sailors here it is their first OK Dinghy Worlds, other such as Andre Blasse (AUS), Roger Blasse (AUS), Greg Wilcox (NZL), Alistair Deaves (NZL) and Gavin Waldron (GBR) are approaching, or over, 20 championships.

Some are missing with injury. Shoulder injuries appear to be in vogue with OKDIA Vice-President Mike Wilde (NZL) staying home, while local sailor Don Williams (AUS) assisted with measurement with one useful arm but was unable to sail. It was also expected that Rod Davis (NZL) would sail, but his other commitments had taken their toll, and he decided to stay home as well.

The new sailors are finding out what the OK Dinghy is all about. From the Finn class, there is the three time Olympian Anthony Nossiter (AUS), a recent campaigner Matt Coutts (NZL) and long time Finn sailor Rob McMillan (AUS). They are finding out that there is a bit more to the class than they originally thought.

For Collings, this week is his first time in an OK Dinghy for nearly 30 years. He won the OK Dinghy world title in 1984 in Sonderborg, Denmark.

What brought him back? “This is my home town so I thought they would be good fun to do this after so many years. I had a sail and remembered I really enjoyed sailing OKs. They are great to sail in all conditions, especially downwind. I sailed a worlds in New Zealand in 1985 but didn't do any training for that and haven't sailed one since. Since then I have sailed Etchells, and Tasars and a bit of Lasers.”

How has the class changed since then? “The mast and sails have developed a lot since my day, they have got a lot harder with so many big sailors in the class these days. I wasn't a super lightweight back then, but I am now. The boats haven't changed that much though – it's all pretty similar and still a lot of fun to sail. But still very hard. The people in the class are the same, maybe there are a few more professionals in the class nowadays.”

Is he back for the long term. “I don't know. The worlds don't come to Australia very often and I would find it hard to go overseas now. But I might be able to find an old boat I can fix up.”

“I was really surprised how well I went on the first day.” Collings got a fifth and a tenth. “I am just trying to focus on the right things. I still think I am a bit slow at times, but I didn't seem to be in the first two races. In the third race I just went the wrong way. The wind did what I expected it to do, but the direction didn't do what we expected. It was one of those races when you say 'I'll do what the locals do' and then you don't do it when you get the regatta.”

Looking at the conditions he said, “Occasionally we get days on end of sea breezes here, but it's quite rare for that to happen. More than likely you get a bit of everything here, so this is not unusual. If a frontal system comes through then each day is different.” That has certainly been the case this week.”

“Back in 1984 my main competition internationally was Stig Westergaard (DEN). Stig was the one to beat when I won the worlds and was always a very consistent sailor. There was also Alastair McMichael (GBR) and when I sailed, and won, the English Nationals he was second; and also John Derbyshire (GBR) was third in the worlds, the year I won. It's amazing that those guys went on to do some pretty incredible things.”

“My best memories of the class back then are travelling and seeing lots of countries, which was always lots of fun. I always always enjoyed sailing in different places. Basically it was my chance to get to see the world. I went overseas quite a few times and haven't really done that since.”

Peter Milne started his OK Dinghy career just as Collings was finishing. “Glen was just finishing as I came into it. I only overlapped a year or two with him and then he went to New Zealand for a one off worlds, so it's a long time between events for him.”

After a gap of some 14 years, Milne has bought back his 1999 world championship winning OK Dinghy and is having another go. Why did he return to sailing the OK. “Hmmm, these are questions I keep asking myself. I guess the thing that drags me back mostly is the culture. The friendliness, the intensity of the racing and the social side. Everyone mixes together really well. And of course the fun of sailing them downwind in a breeze is not matched by many other classes. So, that's what brings me back – the opportunity to sail my old boat against my old mates.”

“I started in 1983, stopped in 2000, and came back last year. I have done six months before these worlds, though I have been sailing a lot of different boats over the years. In 1983 -1989 period I did a lot of other sailing, with keelboats and Sydney-Hobarts, but always kept coming back to the OK. When I started sailing there was a core group of us with Andre, Roger, Neil Williamson (AUS) and Mark Jackson (AUS). There'd be six to eight of us out a couple of nights a week, so we all sort of grew up together. Really this is just the opportunity to race against my mates again.”

On the changes in the boats. “The masts are very different and I really don't understand them. Roger very kindly leant me his mast and I had a brand new sail made at the last minute. I can't sail with a stiff mast, so I changed to a much softer mast which is like what I had when we had aluminium. I am only 82 kg now. When I won the worlds in 1999 I was 78 kg and I won the windiest race. But I had an aluminium mast that has a epoxy-glassfibre wrap around the top, so it was very stiff sideways but very soft fore and aft and that worked really well in the breeze.”

“So if I keep sailing now, I will have to develop another mast as I can't keep using these stiffer masts we have today. For my weight it doesn't really work.”

“The boats are different from the 1990s with the carbon mast but not a lot, just the masts are stiffer and there seems to be an increase in the size of the people sailing the boat these days. It's quite dramatic, so I don't think at the moment there is a lot to cater for the lighter guys, especially in the breeze. If you sail here you have to have rig that will be competitive in 20 knots. So I think we just have to work a bit harder for that. But that's the main change I see over the last 20 years.”

“I have my old boat back, all resprayed, that I built 18 years ago. It's still quick, it's just the rig that's not quite balanced, so I need to sort that out and see how we go. I bought the boat back and restored it so I think I'll keep it and do regattas here and there. I am still sailing other boats as well so it's not my main boat at the moment.”

Of the two former world champions, Milne is currently lying in 17th place after two 13th on day two, but dropped with a 38th on day three. Collings is fairly slightly better in 12th overall.

At Black Rock, the club has been buffeted by 30-40 knot winds all day long on Saturday with temperatures in the high 30s. The frustration of the sailors is palpable. They want to go sailing, but that will now have to wait until Sunday, which is the final day of the event, as for the third time this week the sailors have been kept onshore because of strong winds. Two more races are needed to make a valid championship and the PRO has changed the schedule for the final day to give the best possible chance of racing. Racing is now scheduled to start at 10.00 with a last possible start moved back to 17.00. So keep fingers, toes and everything crossed that we get the final races in.