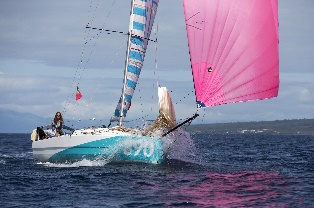 In six days’ time, on Sunday 22 September at 14:15 hours, the Mini-Transat La Boulangère will set sail. Following the withdrawal of the Swiss sailor Arnaud Machado due to injury, ultimately there will be 87 women and men taking the start of a unique journey into solitude, with virtually no means of communication.

Solitude is the very essence of the Mini-Transat. In a world where communication and the instantaneous circulation of news are a constant, the fundamentals of this race have remained unchanged since the first edition in 1977. Aboard Mini 6.50s there are no computers, no satellite links, no live media link-ups, no photo and video sends. It’s impossible to contact your loved ones to share the magical moments or try to get over a touch of the blues. The only link with the shore is a daily report broadcast over SSB radio by race management to give the low-down on the weather situation, the 48-hour weather forecast and the distances to the goal for each competitor.

Cut off from the world, but potentially in contact with the other Mini sailors

The sailors have the opportunity to communicate between one another via VHF, which has a limited range (around 10 miles). During the first leg (La Rochelle/Las Palmas de Gran Canaria), the exchanges are regular for the majority of the competitors. However, things become more complicated during the second leg to Martinique. Indeed, as the competitors spread out across the Atlantic, the exchanges become few and far between. If they’re not sailing within a group, the racers can spend days, weeks even, without uttering a single word.

The VHF chats between mates can be a godsend then. “During Les Sables-Les Açores-Les Sables, I had a major autopilot issue”, says Benjamin Ferré (902). “I was really tired and vulnerable. After numerous days without talking to anyone, I saw a boat a long way off and discovered that it was the Mini No.697 skippered by Kevin Bloch. We chatted over VHF and I just broke down in tears. I was so happy to speak to someone…”

Kevin Bloch also relishes these exchanges with his Mini mates, but he’s going to try to keep them to a minimum during the passage. “I like to be in the zone, without letting myself get influenced by what the others are saying to carve out my course. That way I’ll learn more,” he says.

“Blubbering and laughing in the space of 10 minutes”

The Mini-Transat requires a lot of mental strength, otherwise you crumble. “It’s an emotional yoyo, you feel like you’re three years old”, smiles Céline Sallès (514). “In the Mini, you can be blubbering and laughing in the space of 10 minutes,” confirms Sébastien Guého (909). “Thanks to the demanding qualification system, we all arrive here mentally armed to make the passage. You just have to trust yourself.”

For some, the solitude and the lack of communication can prove to be a real challenge, particularly for the 76 rookies competing this year, like Matthieu Perraut (825): “This is the toughest aspect of the Mini-Transat for me. I’m not a through-and-through solo sailor, even though I like the idea of being the sole master of my ship. Mentally, it’s not easy to spend long periods without talking. Nobody sensible subjects themselves to such isolation. That said, it’s very interesting to confront such an experience and I’ve already learnt a lot about myself thanks to the Mini.”

“An extraordinary journey into your inner self”

For others, the solitude, in contact with the elements, is happiness itself, indeed it’s why they take part in the Mini-Transat. “This experience of solitude enables you to refocus on what’s important in life,” beams Jean-René Guilloux (915). “At 45, I’m at a point in my life where I can look back at what I’ve done, what successes I’ve had and what I haven’t yet had the time to do.”

The Mini-Transat is also the opportunity to grant yourself some quality time that you just don’t get every day, as Jean Lorre (570) explains: “In my Mini, I read books, I think, I talk out loud, I sing, I listen to music and to podcasts especially. I have time to think without being disturbed by some kind of interaction or notification from a social network.”

Benjamin Ferré refers to the Mini-Transat as an “extraordinary journey into your inner self”, a sentiment echoed by many of the racers who will set sail from La Rochelle on Sunday to enjoy what is surely the ultimate experience when it comes to a true sense of freedom, something that particularly appeals to Céline Sallès: “You leave all your problems on land. It’s just us, our boat and the ocean…”

Arnaud Machado (910) was one of the favourites in the production boat category. Unfortunately, he fell of his bike a few days ago, fracturing his tibia. This injury inevitably makes it impossible for him to have a second attempt at the Mini-Transat. “I’m bitterly disappointed. I wasn’t expecting that two years of preparation and sacrifice could fall through in a couple of minutes, especially as I was avoiding taking any risks as we neared the start. It’s a cruel twist of fate. I’m going to do all I can to start a programme of rehabilitation as quickly as possible so I’m ready for action again early next year.”