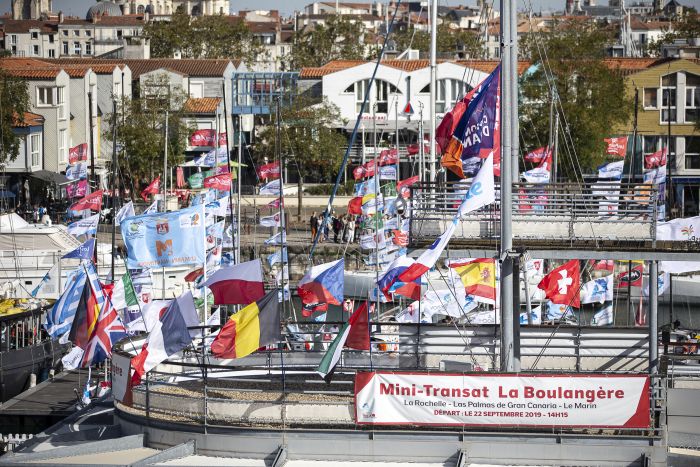 D-5! On Sunday 22 September, at 14:15 hours, the 87 entries in the Mini-Transat La Boulangère will set sail from La Rochelle on the first leg to Las Palmas de Gran Canaria. In the meantime, they’ll be able to make the most of a warm-up lap during the Prologue, which has been switched to Friday (instead of Wednesday) due to the steady breeze announced tomorrow and Thursday in the bay of La Rochelle.

In the meantime, preparations are continuing and the Mini-Transat La Boulangère sailors are enjoying the rather heartwarming pre-race atmosphere. It’s the famous ‘Mini spirit’, a combination of mutual aid (on shore as well as at sea), of sharing, of fraternity and of conviviality… Some of the participants took some time out to respond to the vast question: “what does the Mini spirit represent”?

It’s a paradox: lots of sailors in the Mini-Transat La Boulangère have never enjoyed such an entourage and such support before signing up for this singlehanded offshore race. The ‘Mini sailors’ make up one big family, united around the same (all-consuming) passion and a common challenge: to cross the Atlantic on the smallest offshore racing boats in the world.

“For me, the Mini spirit is a human bond between people who give the same energy to realising their dream. We’re all building a house of cards together, each in our own unique way, benefiting the community”, explains Guillaume Coupé (906). “The fact that we don’t have a shore team, forces us to turn to the others for help. We need them to mount our solo projects. In fact, our Mini sailor friends become our shore team”, explains Jean-Baptiste Ternon (880). “We want to get across to the other side, but we also want our mates to make it to Martinique. As such, when we have time to help the others with their preparation, we go for it without a moment’s thought,” says Thibault Blanchet (774), who was securing his rudders with the help of his brother today after losing one in a previous race.

For some, the mutual aid has been key to realising their project. This is notably the case of Pierre Moizan (630). “Last year, I hit a UFLO in the Les Sables-Les Açores-Les Sables race and had to abandon the boat. I took a year to rebuild her. A lot of Mini sailors helped me out, including some former members of the circuit like Adrien Hardy. Without them, I wouldn’t be here now. Their support has carried me through. Receiving all this help without asking for it is very touching.”

Interestingly, the name on her transom, one James Caird, refers to the epic rescue mission by boat that was undertaken by Sir Ernest Shackleton and his men, from Elephant Island in Antarctica to South Georgia. It is surely one of the greatest small-boat journeys of all time – and another will be Pierre Moizan achieving his goal of reaching Martinique after an already epic journey to make the start line.

Brothers and sisters at sea

At sea, the spirit of solidarity is even more powerful. Racers within VHF range support one another, motivate one another and, if need be, offer assistance. “On the water, we are competing, but every competitor is a friend, a brother. Even the more competitive sailors don’t think twice about putting their race to one side and helping someone in difficulty”, explains the Italian sailor Daniele Nanni (659).

Belgian sailor Marie-Amélie Lenaerts (833), who is here with around seven other sailors from the Concarneau training cluster, echoes this sentiment: “We go to the ends of the earth to help one another out. During this year’s Transgascogne, I had an electronics issue. I put out a call over the VHF and lots of racers replied and gave me a hand, even those I don’t know so well. I was kind of towards the back of the fleet and yet even the leaders took time out to advise me.”

The excellent atmosphere at the finishes is another trademark of the Mini-Transat, and indeed the Mini spirit as a whole, as 34-year-old Japanese sailor Masa Suzuki explained on the dock this Tuesday. “I have been so impressed by the help and the kindness shown to me and to everyone else within our Mini community. Equally striking is the fact that no matter what your result, everyone celebrates all the finishes, at whatever time of the day or night. I’ve never witnessed that before. In fact, I feel so welcome here that I’m considering living in France, if my wife will agree!”

It’s little surprise then, that his friends and his wife have travelled all the way to La Rochelle from Japan to see what this Mini spirit is all about, offer their own support and see him safely on his way on Sunday.

In the Canaries as in Martinique, the festivities on shore match up to the level of difficulty encountered at sea. “The Mini spirit is also about ensuring you stay ‘hydrated’. Some aren’t quite so good at that side of things and we have a few worrying elements there”, jokes Christophe Brière de la Hosseraye (755), who goes on to explain that experiencing something so strong and intense brings you closer. “You can become great mates with a guy or girl who’s 10 years younger or older.”

Leaving the Mini circuit and its spirit can lead to a form of nostalgia. “Even though I’m preparing for it, the period after the Mini scares me a bit. I’m expecting to feel a massive void on an emotional and personal level,” Guillaume Coupé admits.

The Prologue postponed until Friday

Initially scheduled for tomorrow, Wednesday 18 September, the Prologue for the 22nd Mini-Transat La Boulangère has been put back to Friday. Denis Hugues, race director, explains the reasoning behind his decision: “We’re putting the prologue back as we’re expecting 25 knots of NE’ly breeze, gusting to 30. The skippers are preparing for a singlehanded transatlantic race on 6.50-metre boats. As such, it’s essential that they don’t take any risks in this prologue, the idea being to have a dress rehearsal so that the competitors get a clear picture of the start zone. On Friday the wind is set to ease and become more stable at 10-13 knots.”