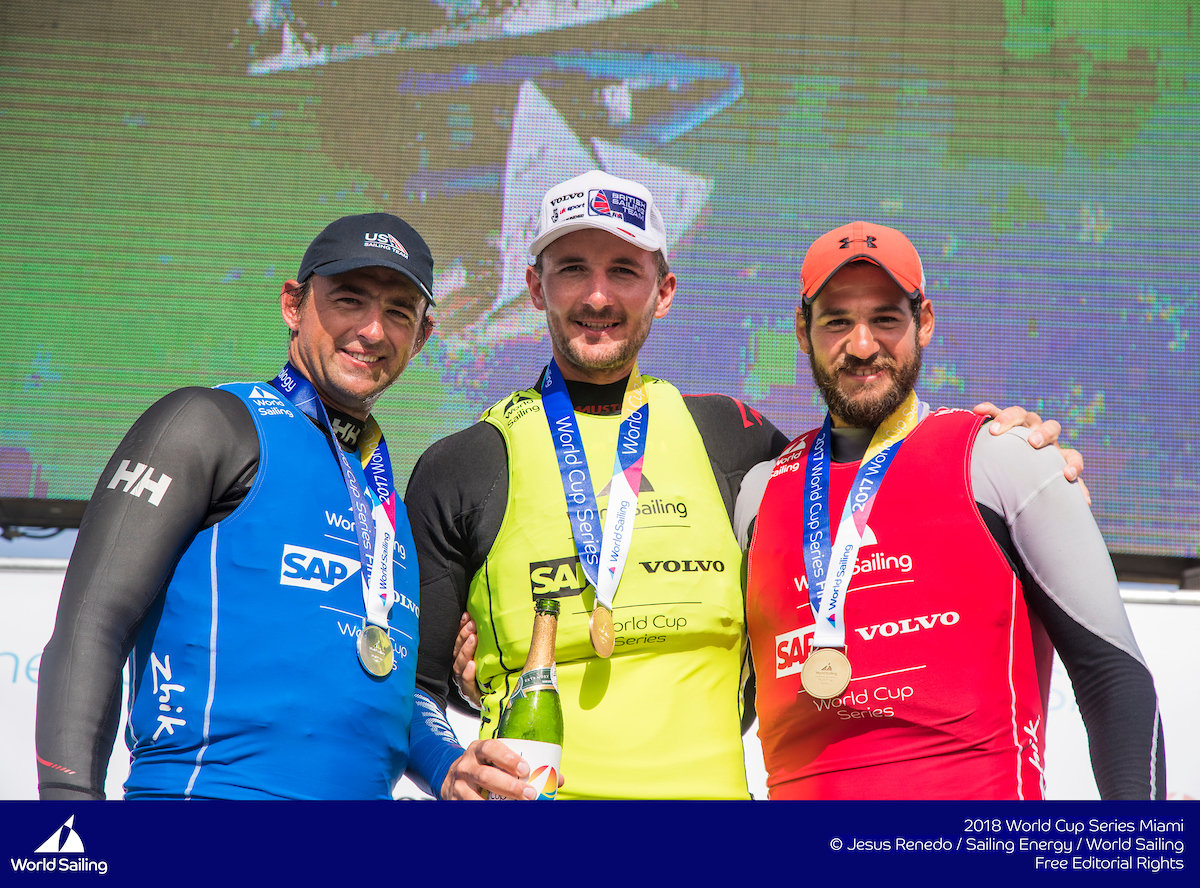 Olympic gold medallist Giles Scott confirmed he is still the king of the Finn class with an emphatic win in the Medal Race at the World Cup Series event in Miami today to take Gold by 32 points.

Rio Bronze medallist, Caleb Paine from the USA, went into the day in third place, but sailed a blinding final downwind to steal the silver medal away from Alican Kaynar, from Turkey, who had to settle for Bronze.

While Scott had already technically done enough to secure Gold, the real interest was the fight for Silver and Bronze and it turned into something of a thriller. Sailed in 16-20 knots the Medal Race produced some fantastic sailing and close racing. The line-up included eight Olympians from Rio, including two medallists. No one was along for the ride. It was a very high-calibre fleet.

Paine engaged Kaynar in the pre-start and both started back from the line. Kaynar looked to have the early advantage, but on the first cross, Paine was ahead. Over the next four legs the medals changed handed countless times. Kaynar only needed to be next boat after Paine or better to secure silver. Paine needed to put one boat between them to snatch the silver.

Paine led through the gate and then allowed Kaynar to escape to the left on the second upwind. Again when they crossed Paine was still ahead, but it was still close. They approached the final upwind mark in eighth and ninth.

Down to the last run, Kaynar looked to have done enough, but on the approach to the final mark before the short leg to the finish, Paine passed two boats and the silver was his. With no more opportunities to pass, Kaynar had to settle for the bronze after being in the top two overall all week.

The race was led from start to finish by Scott in a dominant display that belied his near absence from the class since Rio. Brazil’s Jorge Zarif crossed second after sailing round in second for most of the race, while early third place Max Salminen, of Sweden, lost his way in the second upwind, with Ben Cornish, from Britain, eventually crossing the finish in third.

Kaynar said the week was exceptionally hard in terms of both the level of the sailors and the schedule.

“As this year we have the first qualification regatta for the Games almost all the good sailors chose to start the season with Miami. So the level was really high. The week was really hard; we had three days of three races. It was really challenging for fitness. And the shifty conditions made it tactical.”

On the Medal Race, “I had three points difference with Caleb. So he had to put one boat between us. All through the race he was just a boat in front of me, but he just had better last downwind.”

Despite losing the Silver, “I am happy with my result. It is good way to start the season with a world cup medal. Now we are looking forward for Europeans in Cadiz.”

Caleb Paine won the Bronze medal in Rio nearly 18 months ago. Miami was his first regatta back since then after starting training late in 2017, and he put on an impressive showing.

“It’s been a really tough event, but very grateful I am back in the boat and sailing. It was a great event.”

On the last run? “I knew I had to push as hard as I could to create as much distance, and I barely got it on the last bit. I haven’t been too fast downwind but fortunately enough managed to pull it out.”

“I am definitely not as in shape as I was before, but it’s a process and I am just happy to be back and sailing and doing as well as I have.”

Scott was also happy to be back in the Finn.

“It’s great to be back in the boat. Miami gave us some different conditions, which was nice. It's really good to be able to come back to the class, catch up with everyone and get some great high class racing in.”

He said the class has moved on since Rio. “There are a lot of great sailors coming through and people are clearly try a few different things with kit, which I think is great for the class.”

“I was able to race well all week. Alican put a great first few days in so it was looking close for a while, but I suppose my good last day was enough to sneak the 19 points.”

After nearly a year and a half away from mainstream Finn competition, the four-time world champion and Olympic champion Giles Scott, is well and truly back.

The fleet in Miami was world class, so to secure the gold with a day to spare is a remarkable performance after so long away from Finn competition. Scott’s performance on the final two days was enough proof that he is still the king of Finn sailing. The target remains on his back.

Looking ahead, the 2018 season is geared around the 2018 Sailing World Championships in Aarhus in Denmark, in August, the first qualifier for the Tokyo 2020 Olympics. Before then there is a lot of sailing to be done, with most of the fleet now heading back to Europe to prepare for the first major event of the year, the 2018 Open Europeans in Cadiz, Spain, where there are almost 100 Finns on the entry list. It begins in just over six weeks.