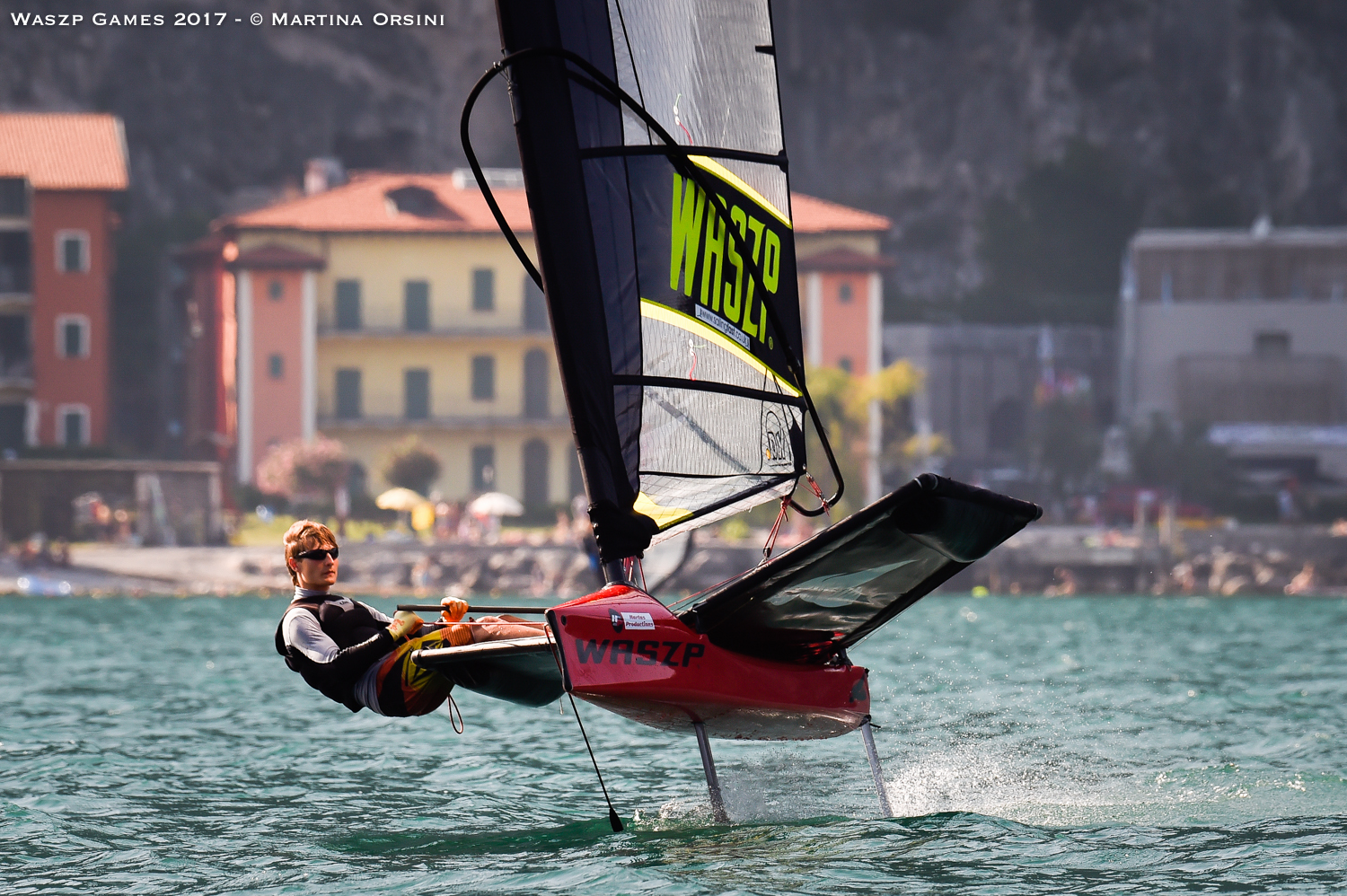 There are 54 entrants from 17 nations ranging from age 12 years to 61 years. Sailors come from a wide range of abilities with a variety of goals. There are juniors from Optimist backgrounds through to Olympic Games competitors and seniors who have sailed previous TP52 campaigns, the America’s Cup and the Whitbread Round the World Yacht Race.

Competition for the first WASZP Games title will be hot with a number of sailors crossing the lake having just competed in the 2017 Moth Worlds on Lake Garda last week. Of those Harry Mighell finished in 9th place in the gold fleet and will be the target to beat for a number of the young guns. Kohei Kajimoto from Japan, but living and working in Australia, finished 20th in the gold fleet. The two Italian brothers Gian and Stefano Ferrighi were the top two Youths at the Moth Worlds and two other Australians chasing the dream include Jack Abbott and Dean Souter.

Jack has sailed the WASZP on and off for about 8 months and is quite confident that he can be competitive. “I am really excited about the regatta. One of my aims is to pip off Harry (Mighell) and snake off a few races off some of the others. We are all in the same boat and what I really like is the fact that when you line up on the start line, the guy next to you has exactly the same kit.”

“Last year I was sailing in the Moth which was good practice for foiling but it is very difficult to sail. The WASZP is one design and the difference is the sailor.”

As part of the French team, Marc Babin is the grand master at the tender age of 61 years. Marc has been sailing a TP52 grand prix yacht in IRC division and has decided to go back to the roots of small dinghy sailing.

“I was racing last year on the TP52 and it was getting a bit too difficult for me so I had a choice whether to buy a Laser or a WASZP, but my favourite song is: ‘I believe I can fly’, so I got the WASZP and I hope there is a lot of good competition here in Lake Garda.

There is an impressive fleet of WASZP’s formed in Auckland, presently the second biggest fleet in the world. The WASZP National Championships were held earlier in the year with nearly 30 boats entered.

Marc Orams has a long list of Laser titles to his name and has competed in the Americas Cup and Whitbread Round the World Yacht Race. Another kiwi WASZP sailor with a long and experienced career involving the AC and offshore racing is Glen Sowry aged 55 years.

Sara Winther has been a regularly racing her Laser Radial on the Olympic circuit. Another former Laser Radial World Champion Tristan Brown is competing on behalf of Australia. Tristan is an Olympic class coach who has taken up WASZP sailing for fun between his coaching commitments. Another Olympic sailor comes in the shape of Tamás Szamódy, a former 470 and 49er sailor from Hungary.

Reed Baldridge (USA) who recently won the WASZP Atlantic Coast Championship and competed in the Youth Americas Cup is another name who may test the masters and the young guns.

Spain has a pod of WASZP’s from Palamos who have been training together. Their lead coach and Spain’s WASZP ambassador is David Busch.

“We have had one training camp at Barcelona Sailing Centre and another in Palamos in the bay, we are used to a few more waves than here but we will see how it works. We have a number of sailors who want to sail in foiling classes. We want to sail more regattas and build the class in Spain and all over Europe.”

There is a number of young Optimist and Laser 4.7 sailors ranging from 12 – 17 years making the fast track transition to a foiling one design.

One such training group has 7 competitors from Norway. There are around 25 WASZP’s that have been sailing for the last few months at two different venues, the Royal Norwegian Yacht Club in Oslo and Bergen.

Henrik Haarland who is age 15 years is one of the Norwegian team. This is the first regatta the group will race in an organised WASZP regatta. The competition between us is quite intense. Yesterday I just completed my first foiling gybe and that went good so now I plan to foil all around the course.

One of the girls on the Royal Norwegian YC team Fredrikke Foss adds:

“I got my WASZP in October but it was too cold to sail in Norway so now we have been sailing the boat every weekend since April. There is a real big difference between Oppi’s and Foiling, it was a new balance, it was really fun to learn, it took some time but now it paid off. It is my first regatta and I am still working on my foiling tacks and gybes but It would be cool to beat some of the guys at this regatta.

Richard Schultheis from Malta is the youngest competitor at 12 years of age. He is an Optimist sailor who was the vice champion at the 2016 European Championship. “I came here three days ago and just started sailing the WASZP. It is quite a bit bigger than the Optimist and there is a big speed difference. I am enjoying it, I was foiling on the first day!

Melissa Kalicin has lived onboard a Freedom 38 yacht in Antigua for the last 12 years. She has sailed keel boats but will be competing at her first ever dinghy regatta. She is a promoter of the Magenta Team Project. She got hooked on the WASZP at Foiling Week in Newport and has been obsessed with carrying out her dream ever since.

“I want to learn as much as I can, I have been training independently so I want to get time on the water and advice from the work shops. I am pretty proficient at getting around the course but I am just working on my gybes and downwind foiling”.

Despite the difference in skill levels at the International WASZP Games, there are racing formats for all, as well as on-water training being provided by the WASZP Team.

Off the water the WASZP class is one of the few classes to offer full Workshops where the WASZP team assist all competitors with rigging, tuning and sailing the boat.

Other off the water activities not requiring the wind include Stand-up-Paddling and Canyoning at the Univela Sailing Club in Campione.

Social events run post racing each day starting with an opening ceremony and at the end of the week the WASZP Party, with a live band and sensational food and beverages.