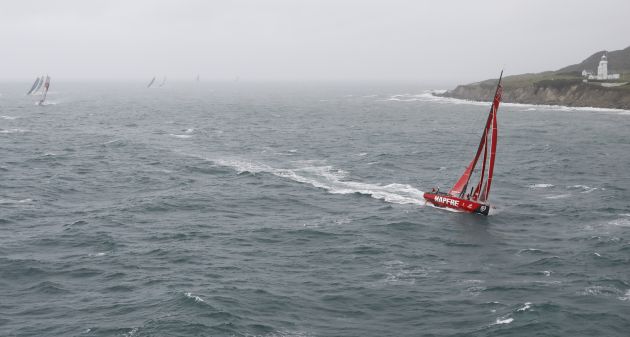 MAPFRE took first blood in the opening battle of the Volvo Ocean Race fleet – with Xabi Fernández and his Spanish team finding faultless form to smash the established record time for a monohull around the Isle of Wight.

MAPFRE clocked 3 hours 13 minutes 11 seconds in strong conditions off England’s south coast to hold off Team Brunel and notch up victory in the Around the Island Race – the first in a series of four 'Leg Zero' tests acting as qualifiers for the Volvo Ocean Race 2017-18, which starts on 22 October.

The first four of the Volvo Ocean 65s – MAPFRE, Brunel, AkzoNobel and Dongfeng – were all, subject to ratification by the World Sailing Speed Record Council, under the fastest previous monohull time of 3:20, set by the super-maxi ICAP Maximus.

On a grey summer’s day in Cowes, scattered patches of drizzle couldn’t obscure the brightly coloured sails of the Volvo Ocean 65 fleet as the brass cannons of the Royal Yacht Squadron boomed out the first official start signal in the build-up to this edition of the Volvo Ocean Race.

MAPFRE brought their team’s Olympic experience to bear as they won the start handily, beating Vestas 11th Hour Racing and Brunel across the line.

With wind from the south between 15-20 knots at the start and gusts up to 35 knots, the boats flew down the Solent on the outgoing tide. The most recently announced team, and thus the team with the least miles in training, Dee Caffari’s Turn the Tide on Plastic was the only boat with a reef at the start. They were quickly joined by the rest of the fleet as the wind built during the drag race down the Solent.

After the southern point of the island the Volvo Ocean 65s were finally able to bear away onto their favourite point of sail, with navigator Joan Vila perfectly choosing MAPFRE’s course and sail changes.

There was no surprise that all the top teams around the back of the island had done the previous race, with MAPFRE leading Dongfeng and Brunel. Bouwe Bekking’s strong performance demonstrated that despite only a week’s training before today, and crew trials still underway, the 39,000 miles sailed in the 2014-15 edition are worth gold.

The boats will now regroup in Gosport as a final opportunity to prepare for the Rolex Fastnet Race, the second stage of Leg Zero, starting on Sunday. After the Fastnet, the teams complete Leg Zero by sailing from Plymouth to St Malo and then on to Lisbon.

What the skippers said:

Xabi Fernández, MAPFRE: “Of course, I’m very happy wth the crew. It’s one of our strongest points – a lot of us have sailed together already and the new people are all good people, very switched on, and things are coming together nicely.”

Bouwe Bekking, Team Brunel: “I think we sailed well and made the right sail choices. AkzoNobel have been sailing for more than a year but MAPFRE was the fastest today. All in all, a good day!”

Simeon Tienpont, team AkzoNobel: “We felt we had a solid race and it was good to be in the top of the fleet. It gives us some confidence. Absolutely, there’s a few things we can work on but we’ll also take a lot of positives out of it.”

Charles Caudrelier, Dongfeng Race Team: “Windy and wet for sure. We had a nice match with MAPFRE, had a very good day and we were fighting with AkzoNobel and Brunel. We have seen a lot of things to improve and everyone is ready. It was not an easy day!”

Dee Caffari, Turn the Tide on Plastic: “We were a bit conservative with our sailing plan but we were fast and we’re learning how to sail our boats so I am happy. It’s the first time in my whole career, with all the miles I have done, that I have steered a boat on its bow with all its rudders out of the water. It was impressive!”

Charlie Enright, Vestas 11th Hour Racing: “It never feels good to have a poor result but it’s all about the process and making sure we keep within the right times. Plenty of stuff on the list today to get better at, and actually it was pretty constructive.”

David Witt, Sun Hung Kai/Scallywag: “It was very wet, very windy and we didn’t do very well but there’s a long way to go. We can take a fair bit out of this. It was the first time we’ve ever lined up against anyone and we were right in it. Far from dire straits. If it all went well then you probably don’t learn as much.”