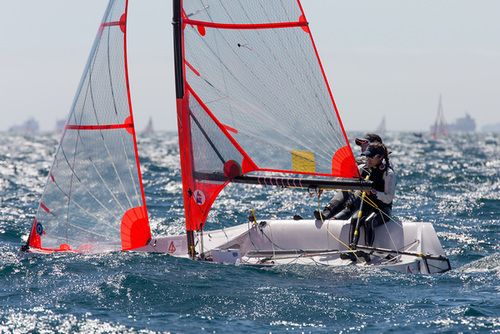 LONG BEACH, Calif., July 31, 2017 – Day one of the 29er World Championship, hosted by Alamitos Yacht Club, started a bit like A Tale of Two Cities. Although just a mile apart, the Bravo Course, closer to Seal Beach Pier, saw shifty and variable winds resulting in starting line drama; while the Alpha Course, nearer Alamitos Bay, enjoyed steady, building breeze; and most starts went off without a hitch.

Competitors in this 17th annual championship event were split into two groups, and each completed three races. Racing on the Bravo Course was initially postponed due to oscillating, light winds that made it challenging even for the skilled Race Committee to establish the line and marks. With fickle winds, OCS were rampant, leading to black flags. By the final race of the day, 20 teams had disqualifications due to premature starts. “The fleet was pushing really hard, we were anxious to get racing,” explained Wells Drayton, racing with Lucas Pierce of Santa Barbara.

“What struck me was that the two courses were like two different worlds,” said ABYC’s Commodore Chuck Clay. “The two courses were only a mile apart, but the sailors experienced such different conditions, wind and racing. The kids did really great; my hat’s off to these athletes.”

Executive director of the 29er Class, Jerelyn Biehl, concurred, saying, “the event is off to a great start with epic race conditions and a stellar race committee!”

One hundred thirty-one teams from around the globe are competing in the six-day event, at ABYC. Many of the teams – including foreign competitors from Australia, New Zealand, Great Britain, Canada, France, Spain, Brazil, the US Virgin Islands, Germany, Poland, Argentina and Hong Kong, in addition to representatives from Ireland, Czechoslovakia, Uruguay, and South Africa –arrived early to tune up in last week’s US Nationals Competition, also hosted by ABYC.

While New Zealand’s Seb Lardes and Scott McKenzie won on points, by a narrow margin over the domestic duo of Alie Toppa and Jacob Rosenberg, it was Toppa and Rosenberg who were named US National Champions. Toppa, of the Lauderdale Yacht Club, teamed up with Long Beach’s new favorite son, Rosenberg, and now have hopes of achieving silver or gold: something no other US team has been able to do in the history of the 29er Worlds. Benji Daniel and Alex Burger, the sole South African team, aced third by just one point; the Top Women’s Team went to Australians Annabelle Davies and Madison Woodward.

Attesting to the international flavor of this talented fleet, Kiwi entrants Lardes and McKenzie ended today’s first day of Worlds at the top of the leaderboard, with Argentina’s Santiago Duncan Loiaz and Elias Dalli second. South Africans Daniel and Burger stuck to their third place status, with Australians Achie Brewer and Max Paul fourth, and Pep Costa and Fran Nunez, of Spain, fifth.

Two more days of Qualifying will be held August 1 and 2; followed by three days of Finals, to be held Thursday, August 3 through Saturday, August 5. The Final Series will consist of 10 races. Trophies will be awarded to the top team overall, the top youth team, and the top girls team. U.S. entrants are hoping for a hometown advantage that will enable them to best third place, the highest position a U.S. team has ever achieved in this world championship event.