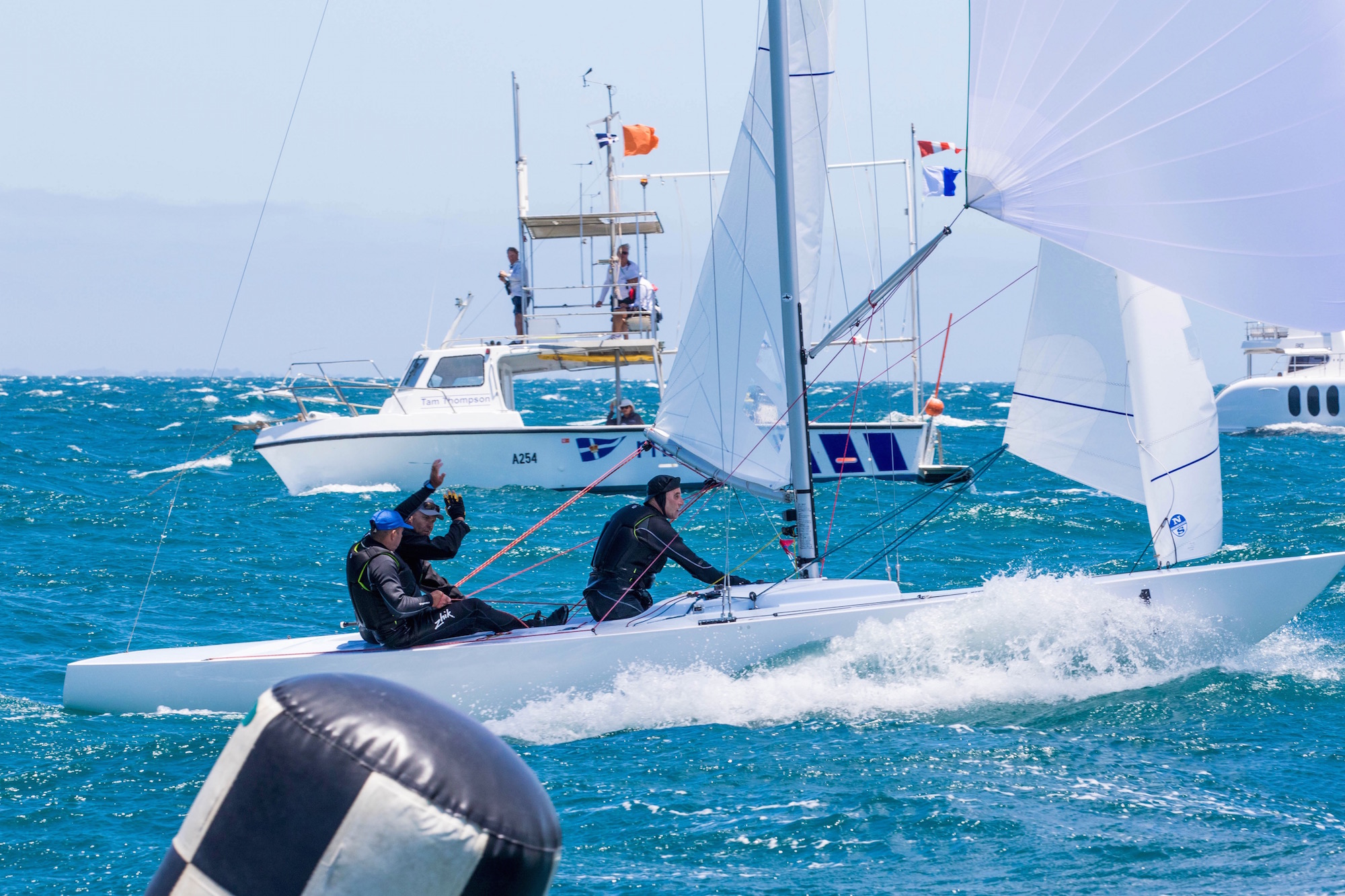 As per the forecast, the ‘Fremantle Doctor’ made an appearance on the second day of the 2018 Etchells Australian Championship to provide 32 competitors with the sort of sailing conditions Fremantle is renowned for.

As competitors left the dock this morning it was still a quite genteel 12 – 14 knots from the East but by start time the breeze was already flicking into the S/SW and white waves started to break out.

After a short postponement for a last minute wind shift, PRO Kim Laurence set a 2 lap windward/leeward course using 1.5nm legs out towards Carnac Island. On the second attempt the fleet got away cleanly under U flag and the majority maintained their lane working out towards the left side (inshore) towards Fish Rocks. Almost in sequence the whole fleet tacked onto port streaming in for a packed top mark rounding.

Chris Hampton’s ‘Tango’ from Royal Brighton YC and Peter McNeill’s ‘Iris lll’ from Lake Macquarie YC were early leaders round the top mark. For the first downwind leg the Etchells were beginning to excel surfing down the increasing steep chop.

By the final top mark rounding, Graeme Taylor and his team of James Mayo and Richard Allanson were really stretching their legs pulling well clear of the fleet. Martin Hill and his team, Mark Langford, Julian Plante and Joachim Aschenbrenner also pulled clear in second with the rest fighting over third.

The final run was typical ‘Freo Doctor’ full on screaming with boats recording boat speeds in the region of 15 – 18 knots. As crews rode the waves across the finish line the audible whoops, could clearly be heard from the committee boat.

Graeme Taylor recorded his first win of the regatta to move 5 points clear overall. Martin Hill crossed second to go third overall and Peter Chappell from Royal Freshwater Bay YC in Perth and his local team of Graeme Johnson and Luke Payne sailed an excellent race to record their best result of the regatta a 3rd.

Martin Hill sums up his crews performance: “We were very pleased today we wanted to be on the left hand side of the course but it was very tough at the start, we had a very good competitor below us who squeezed us a bit but we got up in the top 10 at the first mark and had a reasonable run down. We picked the left gate and went from about 6th to 2nd spot. The boat was going very well upwind and downwind we got the boat up onto the plane but were a little bit nervous because we had a rip in the kite so we had to be a bit careful on starboard tack but fortunately the wind gods were kind to us and we hung in there to the finish so we were very pleased.

“Look the last leg was fantastic, actually when you get in the fast mode and surfing, it is actually very easy to steer, because you are going so fast the relative wind strength is reduced dramatically, some were saying that boat speeds were getting up to 18 knots so it was very exciting and what we came here for, what the Fremantle Doctor was billed as and the doctor was right on time today.”

Others who had a great race in the windy conditions included Douglas McGain and his crew, Sam Haines and Anthony Nossiter from CYCA in Sydney in ‘Ciao’ who scored their second 4th of the regatta and ‘Marmalade’ sailed by local sailors Gordon and Tom Blaauw and Mark Spearman from RFBYC who finished with their best result of the regatta, a 6th. Michael Manford, Dean McAullay and Nick Gray from RFBYC maintain second overall finishing 5th today.

Peter Chappell explains how he found his pace: “I managed to get off the start well at the right end, kept a clear lane, got a top 6 around the top mark and held that pretty well. We changed our rig a bit up the second beat and found a few more legs and got back into it. We took about 3 or 4 boats on that long beat and another when we got our kite up. It was all under control down the last run, fortunately the guys up front are really good, no mishaps so it was all easy.”

Despite the heavy conditions there were only two retirements, a few unlucky competitors with gear failure, soldiered on to complete the course. All were back in the club by late lunchtime for an early bath and some good ole fashioned fish n chips at one of Fremantle’s local favourites Cicerellos.

Two more races are scheduled for Thursday with a forecast of 15 – 20 knots.