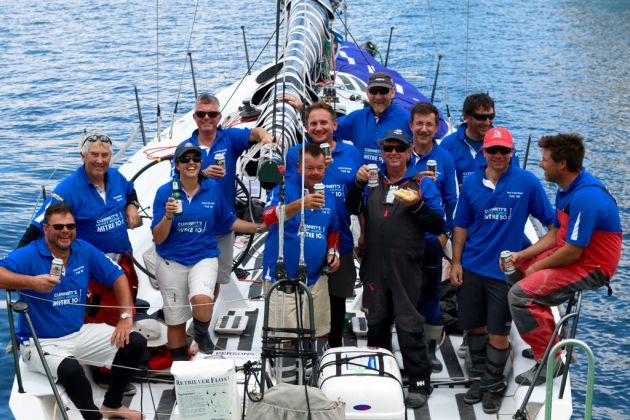 Winning crew of The Fork in the Road. Photo by Sam Tiedemann.

Former Olympic sailor Gary Smith yesterday skilfully steered The Fork in the Road to a fourth consecutive and fifth total line honours in the ninth Launceston to Hobart Yacht Race, describing it as ‘a real boat race.’

The Fork in the Road ended the frustratingly light weather offshore passage race at 1:30:49pm, an elapsed time of 2 days and 49 seconds for the 285 nautical mile course down Tasmania’s East Coast.

Fourteen of the 26 yachts still competing had crossed the finish line by 6pm yesterday, including Launceston yachtsman David Allan’s Sydney 38 Obsession which sailed well to finish fifth in fleet. Fellow Port Dalrymple Yacht Club boat, Lawless, skippered by Stephen McElwee, was sailing up the Derwent at that stage and was in a position to gain a podium place in the PHS handicap division.

Results under the PHS, AMS and IRC categories will be announced today.

The finish yesterday afternoon was the furthest apart The Fork in the Road and second boat to finish, Peter Cretan’s Tilt, had been throughout the race which started from Beauty Point last Sunday. Tilt finished off Battery Point at 3:39:54pm, just over an hour and nine minutes astern of The Fork in the Road.

“The lead changed five times during the two-day race, with Tilt making it a real boat race for us,” Smith said. “We were in sight of each other throughout. “We had race on our hands; Tilt was pushing us all the way, right alongside us at times. However, we got a break as we passed Tasman Island and steadily opened up the biggest lead of the race as we sailed across Storm Bay and around the Iron Pot into the Derwent.”

Despite frustratingly light winds in the Derwent, The Fork in Road extended her lead as she close reached from White Rock to Sandy Bay under a lightweight spinnaker specially designed by Wynyard sailmaker and senior crew member Steve Walker.

“We call it the ‘quick and snappy’ kite, as we can hoist or drop so quickly,” added Smith.

The NNE breeze picked during the afternoon at 6pm yesterday The Fork in the Road and Tilt had been joined at the Elizabeth St Pier by 12 other boats, It Happens, B&G Advantage, Obsession, Martela, Ciao Baby II, Mistraal, Remedy, Emotional Rescue, Nexedge, Mr Burger, Winestead Wines and Helsal V, finishing in that order.