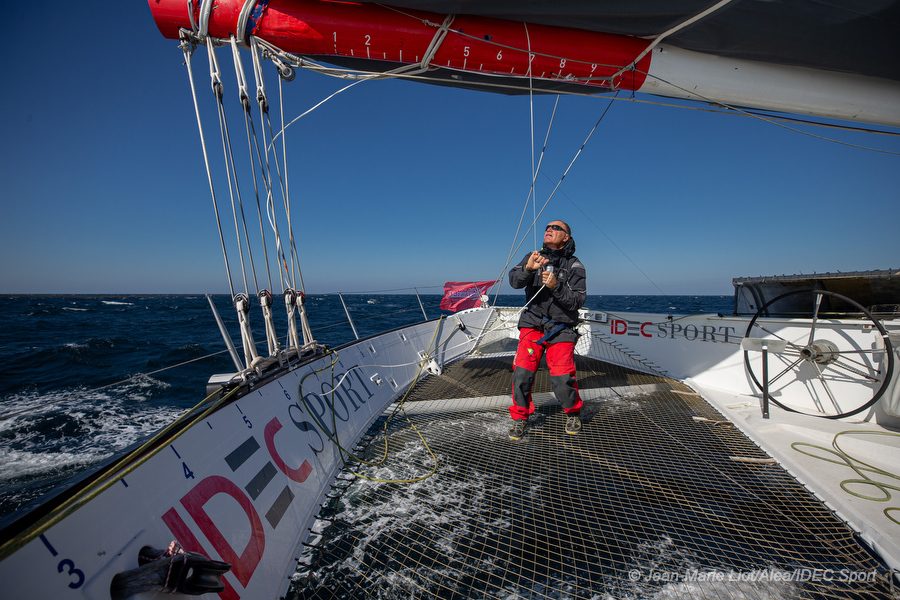 The gybe carried out yesterday evening by François Joyon to move away from the extraordinary low-pressure system that is typical of the Southern Ocean and which propelled him across the South Atlantic from west to east, means that he is now on a straight line almost due north towards the finish in Port Louis on the island of Mauritius.

IDEC SPORT has changed weather systems, with very different winds and temperatures. He can put away the fleeces and foulies and forget the violent winds and astonishing speeds. It is time to feel the warmth, enjoy moderate winds and calmer sailing. The heavy residual swell will remain for another few hours.

The solo skipper, who has spent just over eighteen days and covered more than 10,000 miles out on the water, has not stopped trying to get the highest level of performance out of his boat. He is relieved to have managed to stick with the low which propelled him to the Cape of Good Hope for a week. He can now enjoy the final 700 miles of this Mauritius Route that he has so perfectly sailed.

“I have gradually been peeling off layers of clothing,” explained a calm and relaxed Francis Joyon. “I’m heading north towards the heat and sunshine.”

You can feel the relief. Francis understood early on that once around the St Helena high, which took him to the coast of Brazil, there was a huge challenge ahead. He needed to stick on the northern edge of a typical low-pressure system in the Southern Ocean and speed along at more than thirty knots towards the Indian Ocean.

Francis successfully carried out both the physical and strategic feats of keeping up the right pace with this violent system coming from the west in winds that were often above 30 knots and on seas that continued to worsen as he approached the continent of Africa.

It took five days to go from the East coast of South America to the Cape of Good Hope. Remaining hard at it all the time, the skipper of IDEC SPORT made the most of the downwind conditions, only leaving this powerful system late yesterday to take up another challenge. The latter is more subtle, as he needs to get around a high-pressure system below Madagascar.

He is currently making his way through and will be crossing the transition zone separating him from another low, which should propel him smoothly towards Mauritius.

“I’m pleased to have kept up the right pace throughout this tricky week of sailing,” he admits. “I dealt well with the transitions and am especially pleased to have taken care of the boat, in spite of a nasty swell, which was still around thirty feet this morning. We were continually under the water. This means that there is now a thick layer of salt covering the boat… It’s really amazing! I can’t wait to spot the islands. I can see on the AIS that there is more and more shipping around. I’m expecting to smell the land soon and notice a change in colours, which will mean that land is not far away. I’m a bit tired.”

The final stretch on the starboard tack looks like smooth sailing. Already more than 1500 miles ahead of the record pace that he set back in 2009, Francis does not want to push his boat too hard. He is looking forward to finishing at first light on Friday morning.