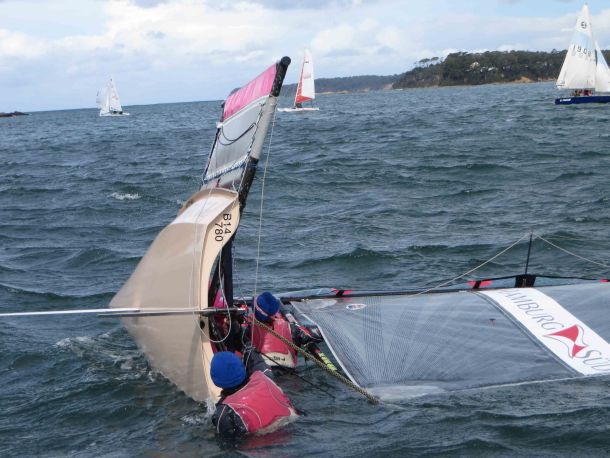 The 2015 Beyond Bank Regatta went off well despite a dismal forecast. This and the ANZAC centenary commemorations deterred a few potential competitors. There were still 70 boats entered with strong fleets in the Lightweight Sharpie, B14 and Hobie 16 classes.

The Batemans Bay ANZAC weekend regatta has been a fixture on the east coast sailing program for well over 30 years. The regatta is open for dinghy, trailerable yacht and multihull sailors. Entrants came from Sydney, Canberra and all over South East NSW.

Racing got underway on the afternoon of ANZAC day in a 5 knot south easterly breeze. The light conditions made for close tactical racing, particularly between two former Tasar class national champions Rick Longbottom and Martin Linsley, who were both sailing Laser radials. Fellow Tasar legends Rob and Nicole Douglass sailed a 470 instead. Richie and Lissa Reynolds continued their winning ways aboard their distinctive pink B14 “The Nude”.

The Lightweight Sharpie class was conducting heats of their NSW Championships, with the number of races held in the regatta to have a major bearing on the results. Two races were held on the Saturday. The second race was held over a smaller course due to developing thunderstorms. The racing was completed before the weather deteriorated, although a few boats were caught in severe conditions on their way back to the shore. One Lightweight Sharpie crew had to be rescued with the assistance of NSW Maritime after they capsized and lost their rudder. The boat was towed back to Snapper Island by Batemans Bay Volunteer Marine Rescue then retrieved by Batemans Bay Sailing Club members.

On the Sunday racing was held inside Snapper Island due to strong winds offshore. The forecast gale never eventuated. Instead a 15 to 20 knot south westerly breeze created great sailing conditions, if a little on the cold side. The colourful fleet was quite a sight for anyone walking along Corrigans Beach on Sunday. The catamarans were moving very quickly around the course. Mick and Bonnie Butler powered to an overall win in the Hobie 16 fleet. There were several capsizes and spinnaker “moments” but none of the crews got into serious strife. Exploit of the day was from Debbie Cockle who was crewing for husband Greg aboard their Magnum 8.5 yacht “True North”. While on the final approach to the start line, Debbie boiled the kettle for a round of coffees aboard then sent out a tweet about it.

The Beyond Bank Regatta enhanced its reputation as a friendly event run for sailors by sailors. These were the members of Batemans Bay Sailing Club and Batemans Bay Sailability who donated their boats, their time and their skills to run the regatta. The other well-earned reputation is for the variable weather which comes at this time of the year. Rob Moldovan of NSW Maritime and Batemans Bay VMR were of great assistance in assuring the safety of competitors. Full results and more photos are available on the BBSC website www.bbsc.org.au