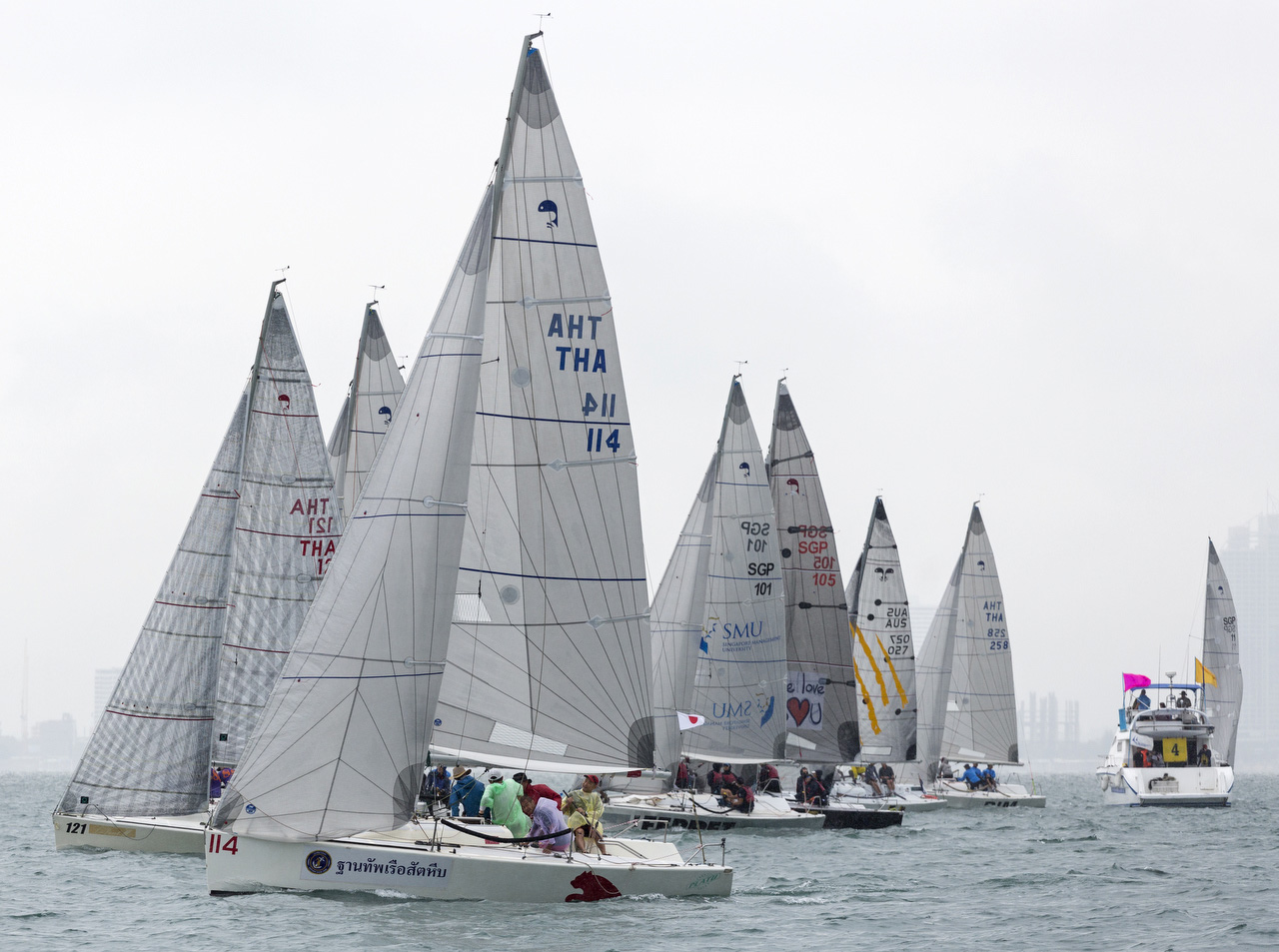 Close racing on Day 1 in the Platu Class at the 2018 Top of the Gulf Regatta. Photo by Guy Nowell.

PATTAYA, Thailand – The blue skies and tropical conditions for which the Top of the Gulf Regatta is known failed to show up on Day 1 as a downpour which started the evening before never let up all day, making it a grey and wet start to the regatta. That, however, didn't dampen spirits as the Race Officer kept the sailors on shore while he went in search of some clean air.

After the AP on shore was down, the 25 boats in the keelboat and multihull classes headed out to the startline for a single windward/leeward race programme – three laps for the fast boats and two for the slower boats.

Having sailed from Hong Kong to Pattaya, perhaps the all-Chinese crew on the TP52 Ark 323 were a little tired, as first blood in IRC 1 went to fellow TP52 THA72. Loosing their title last year, THA72 are keen to regain top spot and the two TP52s will be 'match racing' for the next three days to see who gets the bragging rights.

American David Dimmock knows what it's like to race against the TP52 having done so last year in his Club Swan 42 Loco. This year, Loco is up against the “40-footers” in IRC 2 and today showed their pedigree winning by a minute on corrected time. Long-time competitor Gary Baguley (AUS) and his El Coyote crew were keeping them honest and placed second ahead of David Bell's (THA) Magic in third.

In the Cruising Class, the Japanese team on Team Splay took a comfortable win on corrected time while Pote Suyasinto's all-Thai team on Le Vent placed second ahead of George Foose's (THA) Dream in third.

Sonic, skippered by Kirati Assakul (THA), is the defending Ocean Multihulls champion and got off to a good start today with a first-race bullet on the board. Newcomer Edenko, skippered by Frenchman Dominique Demachy, had to settle for second.

The one-design Platus, known for their close racing, delivered some of the most exhilarating racing of the day with Ithinai Yingsiri's (THA) Pine-Pacific claiming the sole win just 11 seconds ahead of defending champion Rolf Heemskerk's (MAS) Team Viewpoint. Easy Tiger III, another past champion, skippered by Chris Way (AUS) secured the final podium place, just two seconds ahead of four placer Le Vent II in this 11-strong class.

Almost 200 dinghies, Optimists, radio controlled boats and kiteboards are set to join in the racing programme tomorrow in a true festival of sail off Ocean Marina Yacht Club.