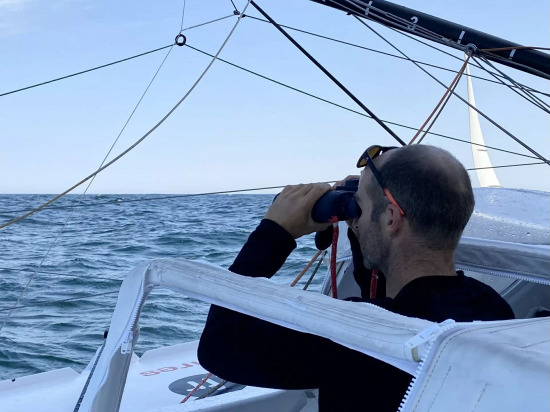 TJV competitors have been racing for nine days. Pic - TJV

After nine days of racing in the Transat Jacques Vabre, the monohulls are still bunched together in cat and mouse battle in which any mistake will prove costly.

Maxi Edmond de Rothschild keeps getting faster at the front of the Ultimes whilst the Ocean Fifty class may well be shuffled as they enter the Doldrums.

The Ultimes have been speeding south since escaping the doldrums yesterday. The technical battle of previous days has turned into a speed race between the four leading boats. However, discounting any possible breakages, catching the leader seems like an almost impossible task. Franck Cammas and Charles Caudrelier on Maxi Edmond de Rothschild are almost 300 miles ahead and have averaged three to four knots more over the early morning than the chasing boats.

François Gabart on his new trimaran SVR – Lazartigue is doing his best to stay in touch with the leaders. “The doldrums were difficult for us. We lost a lot of ground on our competitors,” said Gabart.

The crews are now heading upwind towards the next waypoint at Fernando de Noronha.

After a long descent along the African coast in search of thermal breeze, the leading group has gybed and is starting a long starboard tack toward the entrance to the Doldrums. The conditions are lighter, forcing the pairs to focus on sail, foil trimming and mast setting. LinkedOut, is still holding the lead but only 70 miles separate the top five boats. Apivia is only seven miles behind in second place. It’s a game of cat and mouse – who will blink first?

The 50-foot fleet is a playful one. The seven crews have been challenging each other in speed duels over recent days but all this will change as they enter the Doldrums.

Thibault Vauchel-Camus (Solidaires en Peloton – ARSEP) explained on their radio broadcast this morning that they feel short-changed by the conditions recently. “Primonial is leading the way, even though we’re following a similar weather and geographical route. That’s the beauty of sailing! Anyway we’re only halfway there so there’s still plenty more time!” said Vauchel-Camus

Primonial is still in first place, while Koesio and Solidaires en Peloton-ARSEP are closing the gap. Further east, CGA-1001 Sourires and Arkema 4 seem to have opted for a more direct route. If conditions allow them a quick crossing, this could once again shake up the ranking.

Class40: yet another slowdown in sight

The leading 40 footers are seeing the miles pass under their bows as they slide along the coast. The gybes continue to punctuate the race of this very tightly bunched fleet. If the weather forecast is correct then the frontrunners will likely slow while the chasing pack continue in good breeze.

Benoit Hantzberg explains more from his boat Volvo: “The next few days are going to be lighter. There will be a lot of gybing to do to get to Cape Verde. It will be similar to what we had along Portugal. That’s also why we do these races, not necessarily just for the long speed tacks!”