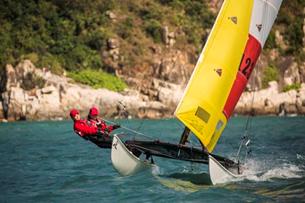 250+ boats turned up for the 26nm 2016 Around the Island Race. Race Officer Inge Strompf-Jepsen set two start lines off of Royal Hong Kong Yacht Club's Kellett Island Clubhouse with the line closest to Kellett Island used for starting the day boats and the outside line for the cruiser, racer and beach cat divisions. The first start was at 0830hrs with the Pandoras, HKPN Monohulls and Multihull Cruisers setting off in a northerly breeze of around 4kts.

By the end of the 20 start sequences, the breeze had built to around 8kts and shifted to the north-west allowing some of the racers to pop their kites as they crossed the line.  All starts got away cleanly except for a few individual recalls including a Laser, Flying Fifteen and two Etchells.  The last division to set off at 1000hrs was the ATI Multihull Beach-Craft and last year's Around the Island Line Honours winner, International Moth sailed by Rob Partridge.

With race management positioned at various locations around the island, a north-westerly breeze of 7 to 19kts was reported; setting the tone for a possible patchy race.  As the fleet made their way up the harbour towards the Lei Yue Mun Gap it was a colourful sight to behold with hundreds of kites on the horizon.

Calum Gregor's 29er was the first boat to make it to Big Wave Bay – Calum was the Overall winner of the last two editions of the Around the Island Race, helming a 420 in the 2014 edition and a 29er in 2015.

With an ominous grey sky at the start, the sailors were relieved to have the sun come out at around noon.  With the sun came the wind which started to fill in at Tai Tam with inside boats hooking into the breeze and hoisting their kites. The breeze continued to build as the fleet headed towards Stanley with the lead boats beating and pulling away from the rest of the fleet.

The first boat to round Cape D'Aguilar and reach the Stanley and Cyperport gates and subsequent Line Honours winner was Frank Pong's 72ft Sloop Jelik who finished at 13:32:22 followed by Marcel Leidts’ Ker 46 Zannekin. The first Class boat to finish was Dion Houghton's Magic 25 R2B2 from the Sportsboat division.

Winning for the third year in a row was teenager Calum Gregor with crew member Russell Aylsworth on board their 29er Shaneequa finishing at 14:09:28!

The prizegiving will be held Monday evening poolside at Kellett Island with event sponsorship from Jet Solutions and prizes sponsored by Dragon Vodka, Kiehl’s and Peroni.