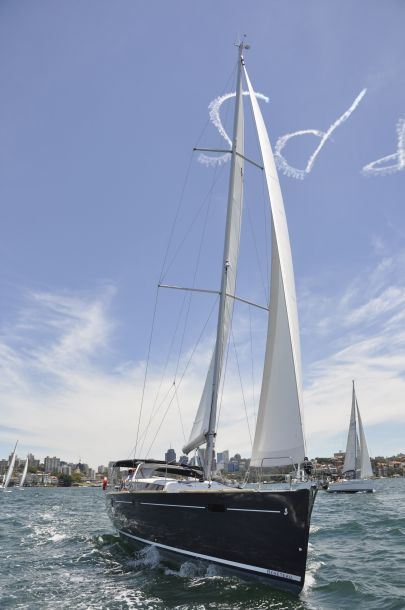 A total of 33 Beneteau owners and crew gathered at the CYCA for the 25th Beneteau Cup and were rewarded in many ways – from the crousants and champagne at the pre-regatta breakfast to the ideal conditions on Sydey Harbour.

As always, boats were divided into two divisions to separate those who are serious about their racing from those who are there to cruise the harbour and enjoy the fun.

Flying Cloud took the honours in the spinnaker division after a hard-fought battle with Outlaw while Elara won the non-spinnaker division. But it wasn't all about the winners, with $7600 raised for the charity Mercy Ships.

Yaffa Media's Sam Williams attended his first Beneteau Cup and filed this report on his experiences:

23 degrees, 10-15 knots of wind and a swift dissipation of any cloud cover, coupled with a host of owners and crew ready to flex their competitive muscles. The Beneteau Cup, celebrating its 25th anniversary, presented by Flagstaff Marine, was a success right from the first mimosa. The smell of team spirit and friendly competition filled the air as Flagstaff Marine co-owner, Graham Raspass took to the podium, briefing everyone on what was to be a great day.

I was told that my services were required on Premier Cru, an Oceanis 48, with a name that suggested I would actually be doing some work. With 20 minutes until the start, as we were relieving the boat of any excess weight, I thought I'd ask our skipper, Keith, a few questions about his Oceanis 48 and his experience with Beneteau overall. Spending the best part of five decades sailing everything from Flying Ants to 16 footers, and his most recent yacht, an Archambault 40. Keith claimed ownership of his Beneteau Oceanis 48 in October of 2014.

Deciding between similar offerings from other factories, Keith was attracted to his Oceanis by by its practicality and liveability. Boasting a three cabin layout with two bathrooms, big windows, a fold down transom, separate shower and vanity in the main cabin, shallow stairs and a roomy cockpit to fit all the crew… “Even the wife loves this boat!” exclaims Keith excitedly while he smirks back at me.

Having competed in The Beneteau Cup both on Sydney Harbour and Pittwater in the past, Keith was more than happy to tell me how much fun it always is. Judging by that and the looks of excitement on the faces back the CYCA, I was set for a good time, jumping on the winches and awaiting instruction from both our skipper, and our tactition, Ron Jacobs.

On arriving back at the dock, all smiles, the “cru” stayed on the boat for a while and had a few laughs about the day that was now behind us. Once up on the deck at the CYCA, it was hard to ignore the atmosphere created by everyone swapping stories of close calls, tactics and funny moments entangled with boisterous laughter. Safe to say, the overall mood in the afternoon was the most reliable indicator of the day which the team at Flagstaff Marine provided for their loyal following.