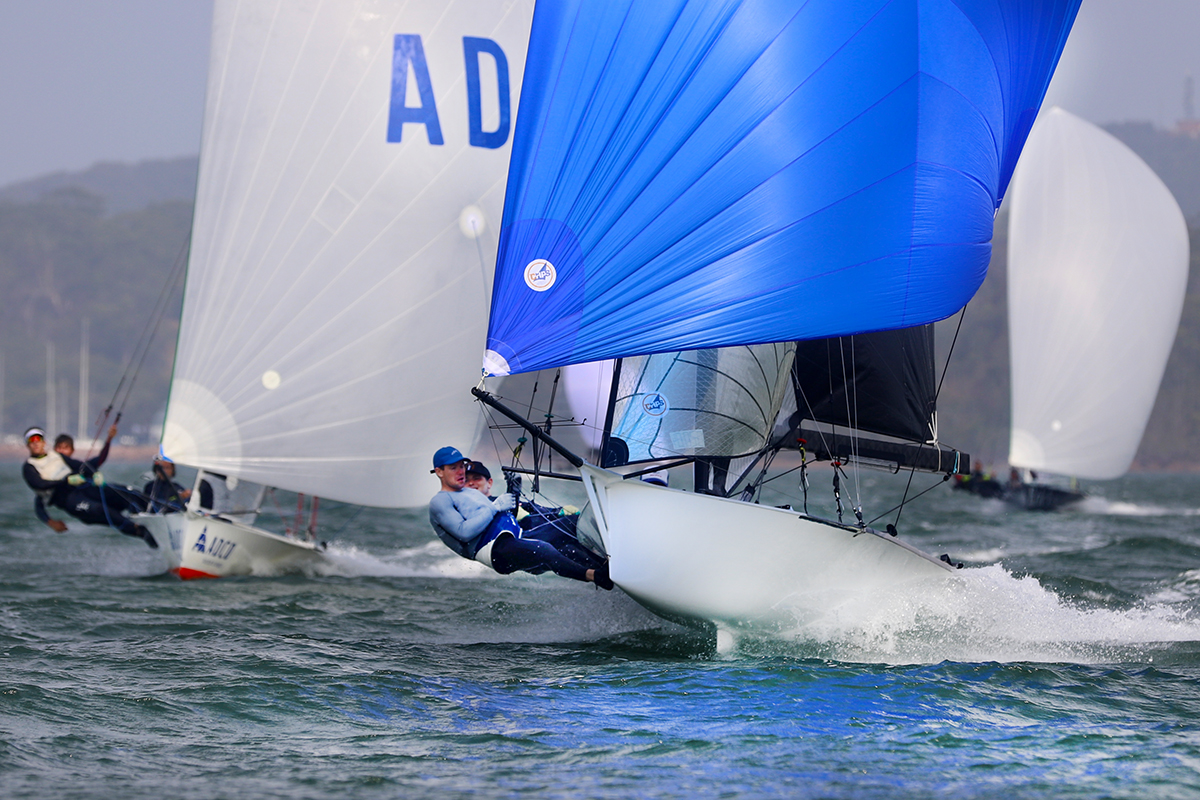 There were more ‘lefts’ and ‘rights’ thrown than in a pub stoush during the 2020 Australian 16ft and 13ft Skiff Championships at Port Stephens today, with the fleet going vastly separate ways in intriguing conditions during races 4 and 5.

The day’s opening battle commenced after a 1-hour postponement, with the seabreeze deterred by a brief southerly rain band. Eventually it settled into a puffy 5-10 knot easterly that divided tactical opinions on the work. Boats searched everywhere but the middle for pressure.

Ultimately, though, it was the Tooheys Extra Dry (TED) crew who landed the critical 1-2 in the finishing order to be crowned boat of the day – a fitting result as their home club of Belmont 16-footers was race-day sponsor.

Sailing his seventh season in the 16s, 22-year-old skipper Henry Makin has brother Grant on sheet and bowman Nigel Hale. They refined their skiff considerably during the off-season with ambitions of cracking the top 5.

“Our secret today was pretty much keeping it simple,” Makin said. “We started at the pin, kept to the left, and didn’t get involved with other boats. Really, it was a one-way track where you either had to go far right or left.”

TED led at every mark in Race 4 to hold out Bryden’s Lawyers by 30 seconds. Nathan Wilmot’s Imea had its best finish to date, crossing third.

Koreman Marine Composites (KMC) then eclipsed TED in the next heat to become the first skiff to post two wins, following on from their Race 2 success yesterday. It followed a fourth placing in Race 4.

Felix Grech, Tom Potter and Paul Darmanin were rarely off the podium at last year’s national titles and they chose the perfect moment to make their move as the 2020 regatta passed its halfway mark, with four races remaining.

“We’ve generally done the development work ourselves because we like to trust in our own abilities. I think we’re as quick as anything going around in most conditions,” Grech said.

In overall standings, only six points separate the top 4 before drops.

Sutech Musto Racing (Daniel Turner) leads despite falling well back in the pack during Race 4. They clawed back to the top 10 at the finish, then it was then business as usual in Race 5 with a third placing.

Bryden’s wily skipper Lee Knapton said the crew was hanging in there, waiting for the finale.

“We’re happy with the way the boat’s going, so we’ll enjoy the lay-day tomorrow and reboot for Thursday,” he said. “You can definitely win this regatta without winning a race.”

SKEelectrical again revelled in the fresher conditions of Race 5 to finish fourth, shrugging off its poor light-air form.

“We’re a bit slow in the light stuff but when there’s a bit of puff we’re up there with the top fuelers,” explained helmsman Danny Anderson. “Seeing the other boats going off on tangents today was a bit of a worry, but in the end we came up with a game-plan and committed to it.

“If we can get some more fresh stuff from hereon, we’ll be happy.”

Queensland’s Data#3 is one of many skiffs having up-and-down results in the fluctuating conditions, although skipper Brad Colledge still has reason to smile as it’s a learning experience for his crew Keith Jones and Cooper Richmond, fresh graduates from the 13ft skiff class.

“We’ve got to learn the art of putting the right rig in,” Colledge said. “We put the big rig in on Day 1, which was the wrong call, and today we went with our small rig for the first race then came in to change up for the second race.

“In the end we missed the second start by four minutes. We still passed about 10 boats so can’t complain.”

Racing continues on Thursday, January 10, with heats 6 and 7.