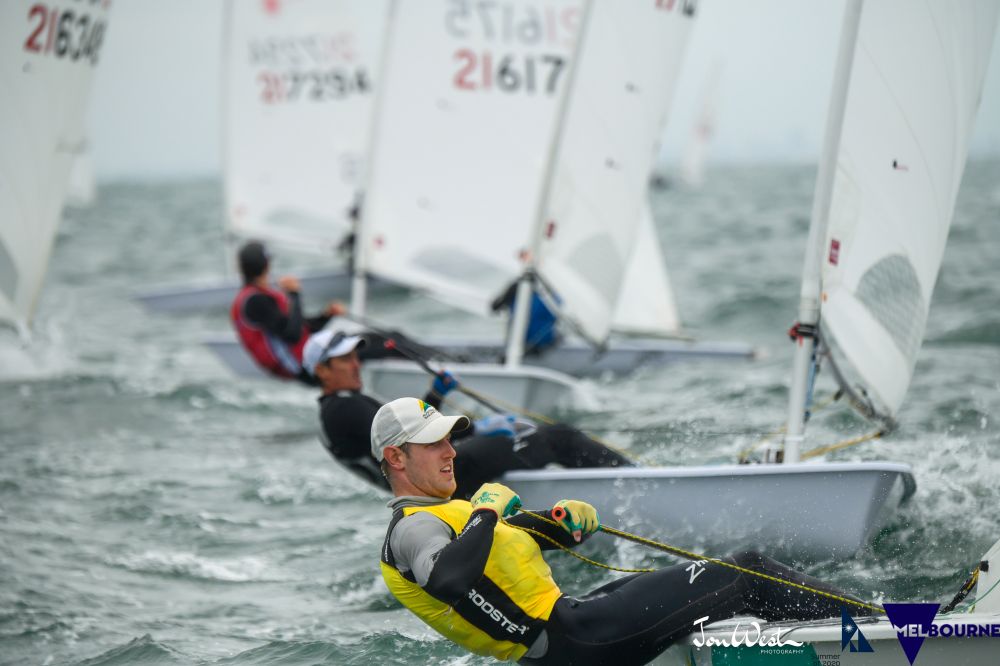 With one day left to sail, Matt Wearn, who will be Australia’s representative in the Laser class at the Tokyo Olympics, has an unbeatable lead in this year’s National Championship.

The past two days have been something of a lottery, with wind strength and direction shifting wildly. But today the wind gods sent steadier breeze, in the 10 to 15 knot range, with only slight shifts in direction that were easily read by the more experienced sailors.

Wearn said the conditions were much improved today. “There was a lot less smoke so it was easier to see where the breeze was. (I had) three solid results today, which makes tomorrow a lot easier,” he said.

Bouwmeester, who has already been selected to defend her title in Tokyo, said of today’s conditions, “It was a bit windy, but it was fun.”

She and sailors from 17 other countries have come to the Australian titles to get familiar with the conditions they are likely to encounter at next month’s world championships.

“We don’t know much about the course yet, but we’re learning fast,” she said, also paying compliments to her hosts. “The organising committee is doing an awesome job, especially with the launching and retrieving. It’s very nice being here in preparation for the worlds.”

The Australian women’s title is almost certain to be retained by Mara Stransky of Queensland, who sits in fifth overall behind four internationals and is a massive 58 points clear of her closest Australian rival, Zoe Thomson.

Singapore’s Jonathan Lio continues to lead the Laser 4.7 fleet. He has won six of the nine races sailed to date. Western Australia’s Toby Coote has a stranglehold on the Australian title, sitting in third overall, 17 points clear of his closest rival, Isaac Schotte.

Kristen Wadley is the leading female in the class in eighth overall.

With just two races to be sailed tomorrow, and the forecast for winds very similar to today, the leaders will be sleeping well, knowing they don’t need to take any risks.

Full results are available at http://sailingresults.net/?ID=80313