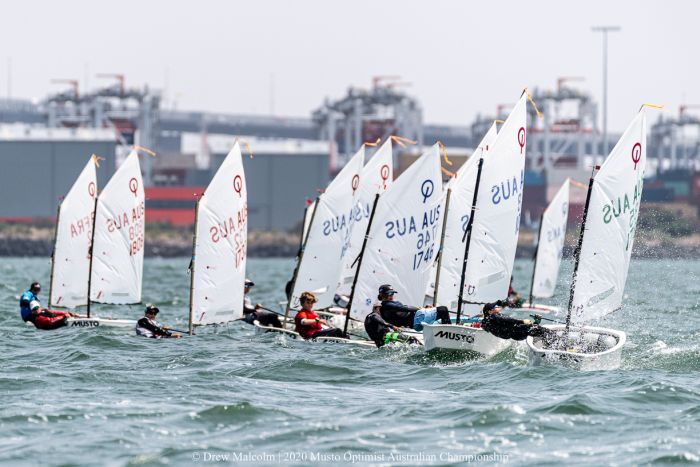 The fifth day of racing at the Musto Optimist Australian and Open Championship saw Melbourne finally turn on some classic conditions with a building sea breeze.

The race course from the Royal Yacht Club of Victoria positioned in front of the Melbourne city skyline looked a treat as the competitors relished the stronger breeze and clearer air with smoke from the recent Gippsland bushfires blown back inland.

This was the first opportunity for all the top sailors of the Open fleet to race each other on the same course, meaning everyone was fairly anxious on the start line.

The first two starts had to be postponed due to too many boats over the line within the one-minute gun, which meant the race committee had no hesitation in going straight to a black flag start to get the fleet away in the 12-knot breeze.

The first race saw series leader Rocco Wright from Ireland take the lead halfway down the run and was never headed until the finish, stamping his authority on the fleet.

While first female Samara Walshe from the United States took a second place moving her up the standings. Meanwhile, the first Australian in the race was Aiden Simmons from Indented Head Yacht Club and Royal Geelong Yacht Club who finished fourth in a great performance.

The breeze built throughout the day to about 20 knots, which suited Samara Walshe (USA) who had the pick of the day with a super consistent 2-2-1 score card, rocketing her to second on the leaderboard and also having one hand firmly on the first female trophy.

It is a fantastic race for the overall title between Rocco Wright, Samara Walshe and Australian Matty Goss with only five points separating the three.

Goss is also in the box seat to claim the overall Australian Championship, with his consistent scorecard of 8-7-7 today a great indicator of the competitiveness in this fleet, with all of those scores being keepers at the end of the day

Second in the Aussie title hunt, 18 points adrift from Goss with plenty of work to do, is Austin Cross, but with tomorrow's forecast looking very light and dodgy, absolutely anything can happen.