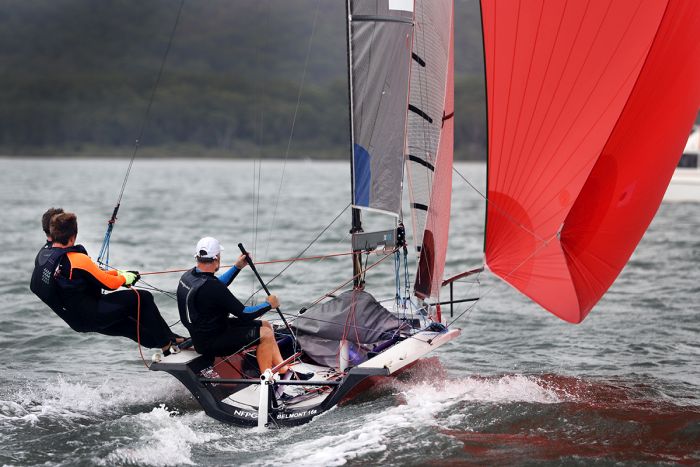 A surprise ‘daily double’ by Newcastle Financial Planning Group (NFPG) has put the wind up the leading contenders in the 2020 Australian 16ft and 13ft Skiff Championships at Port Stephens, on a day where pressure was high but the breeze otherwise light and languid.

The flawless performance by the Belmont 16s crew of Ben Bruniges, Dave Hickey and Justin Sharrock was starkly contrasted by sweeping inconsistency among the remaining skiffs. In fact, with two drops allowed under the new nine-race point score, most boats have now had their quota.

Only two races remain, and the forecast for tomorrow and Saturday is for far stronger conditions that will make boat-handling mistakes even more costly.

Race 6 started under the threat of black-flag disqualification, following two general recalls. There was chaos at the pin end and carnage at the marks, with overnight leaders Sutech Musto Racing, Koreman Marine Composites (KMC) and Brydens Lawyers all caught up.

At one stage a 13ft skiff tangled spectacularly with a 16ft skiff under kite, while another took split-second evasive action – fortunately no damage was done.

NFPG avoided the mayhem to virtually sail their own race. They were pursued by clubmate Emptyjets (Rob Flanagan) who was having one of his better days until pipped at the post by Nathan Wilmot’s Imei. Sutech Building Consultants snuck into fourth, ahead of Growthbuilt and the fast-finishing Toohey’s Extra Dry.

Race 7 also saw a general recall before getting away cleanly. Imei somehow found room at the boat end and headed right, with Sutech Musto covering, but this time the left shoreline paid dividends. NFPG had again read it correctly and battled to the finish with Growthbuilt (Ryan Wilmot).

Felix Grech on KMC showed his class by posting a crucial third place, while Eric’s Storage capped off a strong day with a fourth placing.

Ben Bruniges couldn’t conceal his delight nor disbelief with the day’s outcome, against such a strong field.

“The boat’s got it in it, the crew’s got it in it, but if you’d asked me today whether we’d get two wins I’m not so sure,” he said. “We generally like the fresher conditions [so] it’s a good feeling.

“In the first race, about 30 seconds before the start, we saw a shift on the right side of the course. We were mid-line, and luckily could peel out to the right. Then once you get the lead it becomes a lot easier to get around the course.

“In the second race we started towards the pin because there was better pressure to the left, and again we nailed the layline. The guys sailed exceptionally today, we held our nerve and got the results.”

Sutech Musto scored a 19th and 11th, never quite clicking into gear.

“That’s about as tough as it gets,” skipper Daniel Turner lamented, post-race. “At times it looked like we were on the right part of the course but then 20 boats would go around the outside of us.

“Pretty painful, but I said at the start of the week that everyone would have their bad days. This was ours, but the forecast is looking much more positive for tomorrow.”

Any thoughts of a late charge by pre-regatta favourites Imea were also snuffed out by an uncharacteristic 15th in Race 7.

“It’s pretty tough to be consistent in those conditions,” skipper Wilmot said. “Ben Bruniges did it well but otherwise it was very up-and-down. In the second race we got it very wrong.

“It was nice to get 2nd in the earlier race and pass a few boats but it’s too little too late. We’ll still battle away though over the final two races; hopefully get a good blow, put the little rig in, and see how we go.”

With one drop factored in after races 6 and 7, KMC sheds its 15th to take the lead on 25 points. Sutech Musto and Brydens are locked on 32 while Tooheys Extra Dry and NFPG sit on 33 points.

In the 13ft Skiff series, Harry Parker’s AWOL enjoyed a 1-second victory over James Downey in Bigfoot in race 6, however Downey made amends in race 7 to lead home Ebix (Nathan Lilley) and Bruce (Will Divola)

Racing resumes at 2.55pm tomorrow, with ex-skiffies warmly invited to watch the racing from the Port Stephens Sailing and Aquatic Club veranda while reminiscing about the old days.