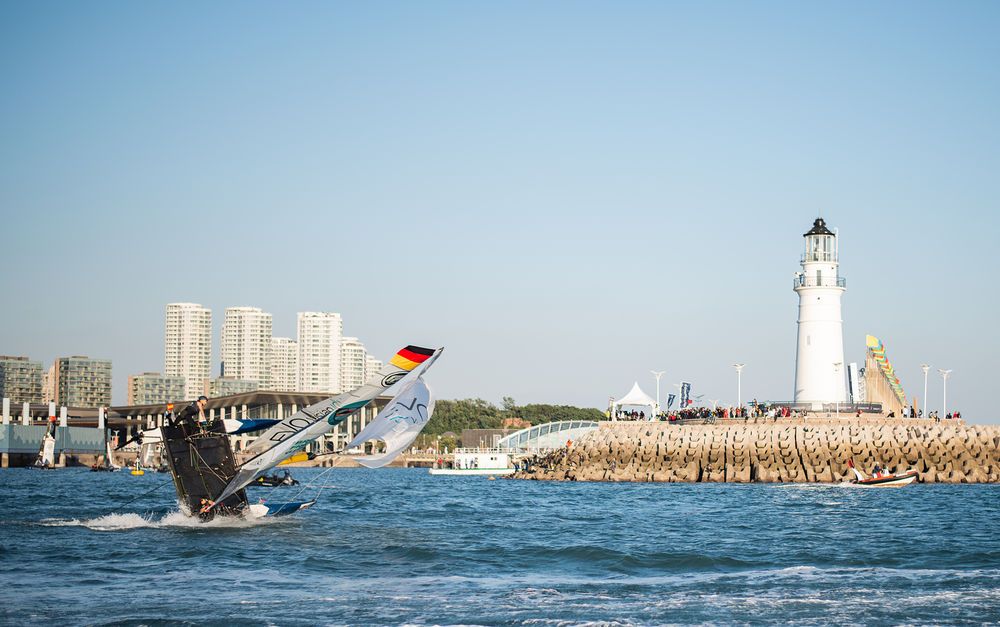 There was plenty of action in the Qingdao stadium with eight cartwheels occurring over the course of the day’s scoring races. Photo Patrick Condy.

It was a tough afternoon on the Flying Phantom racecourse as a carousel of capsizes occurred in the opening races of the Qingdao Mazarin Cup powered by Extreme Sailing Series.

Having been unable to race yesterday due to strong winds of 24 knots, today the teams were chomping at the bit to compete on the waters of Fushan Bay.

Flying straight out of the blocks into a practice race, BIC Sport claimed the first topple of the afternoon as strong gusts filtered through Qingdao's high rise buildings and flooded the course. Purely testing the waters with a quick dip, the sailors swiftly righted their catamaran and were back on their way within minutes, having suffered no injuries.

A venue renowned for its shifty, gusty conditions, Qingdao stayed true to its reputation. As strong winds prevailed into the four scoring races, the twelve fickle Flying Phantom two-person foiling catamarans found themselves bouncing around the course in China's sailing city.

Plenty of action ensued as the afternoon progressed, with a further seven cartwheels occurring over the course of the day's scoring races. Despite the multiple Flying Phantom flips, all teams were safe and continued racing.

Whilst the teams sailed through race one unscathed, race two was a different story. The race marked a double whammy for BIC Sport, taking another tumble just moments before Spanish Impulse followed suit.

“It was a really tricky day,” admitted Spanish Impulse crew, Oriol Mahiques. “We had big gusts, with wind ranging from two to 20 knots. There were a lot of opportunities on the racecourse right until the very end. It was our first day on the Flying Phantom and at times the wind was a bit too much for us, but we tried to do our best.”

Race three saw a little more swimming for the Spaniards; the team capsizing simultaneously with local Team Qingdao, caught by a strong gust near to the city's famous lighthouse.

Despite their mishaps, both teams righted their boats with ease and continued with the on-the-water battle. Chinese crowds cheered for their home team, having turned out in force to celebrate the National Day of the People's Republic of China by watching the Flying Phantom spectacle – an event that marks the 10th anniversary of the 2008 Beijing Games.

“It was great fun today,” enthused Team Qingdao's helm, Max Richardson. “The breeze was really up and down with some big gusts catching a lot of people out, including us. It was really fun to race against the other teams and it's great to be in Qingdao.”

Having been the most consistent of all the teams on the water, it was Kiwi challenger Hamilton Huas that took the top spot in the final standings. They successfully made it through the afternoon without a single capsize – the stable flight of Micah Wilkinson and Isaac McHardie enabling them to take two podium finishes in races three and four, finishing first and second in each respective race.

“It was absolute carnage, but in a good way,” said a pleased Wilkinson, smiling as he stepped onto the dock. “There were just puffs coming from everywhere. We had some big moments in the big pressure – avoiding the breakwater, avoiding other boats – but we came away happy enough. We haven't lost a race today so four good ones.”

Racing in Qingdao is due to resume tomorrow at 13:00 local time (UTC+8), with the city's famous shifty wind expected once again. Fans can follow the racing via updates on the Extreme Sailing Series Facebook and Twitter throughout the day.