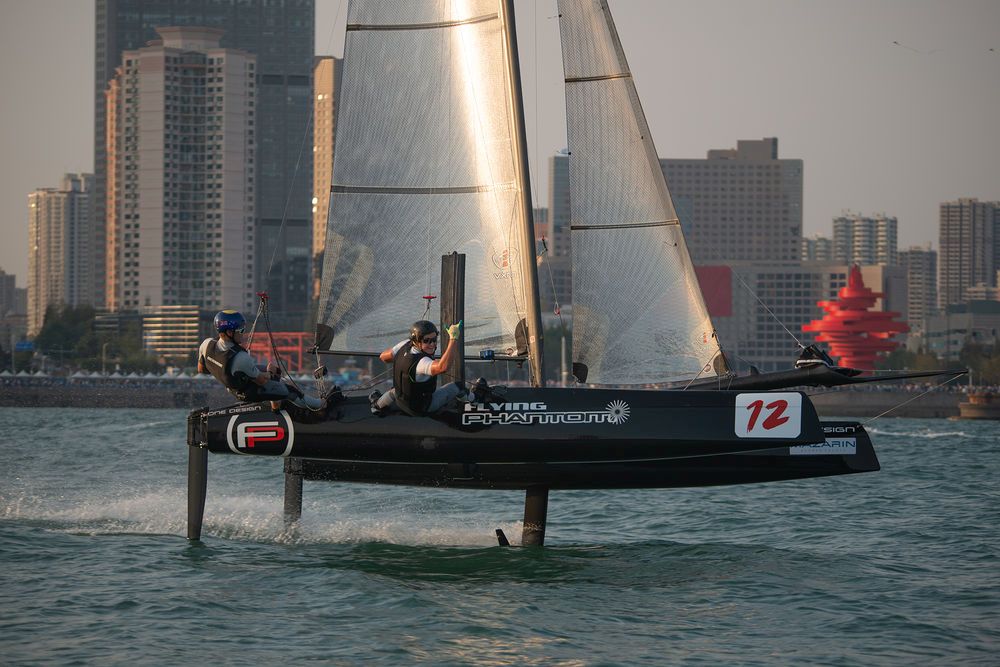 The battle for the Qingdao top spot continued in China today with the fierce French fighting back against Kiwi-flagged frontrunners Hamilton Huas at the Qingdao Mazarin Cup powered by Extreme Sailing Series.

Champagne conditions with up to 15 knots of wind saw the fleet of pocket-rocket foilers live up to their Flying Phantom name, gliding across Fushan Bay with extraordinary rapidity.

The day's six races saw French duos Culture Foil and Team France Jeune hold onto their podium positions despite tough competition from the ever-chasing fleet. They closed the day in second and third respectively, with only one point separating the two teams.

“We're quite happy as the start of the day wasn't that great for us,” admitted Théo Constance, crew for Culture Foil. “The last two races were good and we had a bit of a chance because Team France Jeune had some damage, so we are quite happy to be second.”

Charles Dorange, crew for Team France Jeune, was equally pleased with his result, despite their boat having suffered some breakages on the course.

“It was a really good day for us, but we broke a lot of things on the boat,” he explained. “The trapeze, a stick and the spinnaker all had problems. We tried to fix these between races. There was a race where I fell in the water because the trapeze had some damage, it was a bit scary as it was just after the start, but I was fine and we were able to race.”

Fellow Frenchmen Pierre Boulbin and Riwan Perron onboard BIC Sport may not have had the best day the day before, suffering two capsizes in the event's opening races, but they were truly resolute in their mission to recover the lost ground. The pair jumped up an impressive six places on the leaderboard, moving from last place to sixth.

However, despite the efforts of the French, it was the Kiwis that stole the show. A clean sweep of bullets in every single race of the day saw them extend their lead on Culture Foil by 18 points.

Clearly putting his Tokyo 2020 Nacra 17 training to good use on the Flying Phantom racecourse, Hamilton Huas crew Micah Wilkinson was ecstatic with his result.

“We were sending it around the racecourse, having so much fun,” he said with a grin. “We got a few starts right and we definitely had a few hairy moments out there but it all came together with a few good decisions. It was beautiful, Qingdao was amazing today. Great wind, a few waves at the end to keep it interesting; it was awesome.”

Although they saw a slight improvement on their ninth-place finish after Monday's racing – the team having moved one place into eighth by the end of today's racing – German-flagged EVO Visian ICL endured another capsize in race 8.

One of the most experienced Flying Phantom sailors in the fleet, the team's crew Elias Neuhann was disappointed with his ranking but remained optimistic as he stepped ashore.

“We really favour the light conditions,” he said. “The start of the day was really light, we were really fast then and we handled the boat extremely well. I hope tomorrow is going to be light.”

Local crew, Team Qingdao, unfortunately also struggled on the water today, falling two places in the overall scores. This didn't deter the Chinese crowds though. Cheers for the home team rang around the Fushan Bay stadium, growing even louder as Zhang Jiangting, Secretary of the Qingdao Municipal Committee of the ruling party of China, joined the local community in watching the sailing. Team Qingdao now sit in tenth place as they move into the final day of racing.

The event's grand finale is scheduled to commence at 13:00 local time (UTC+8) on Wednesday. With double-points up for grabs in the in last race of the day, the Kiwis ought to watch their backs – it's anyone's game.