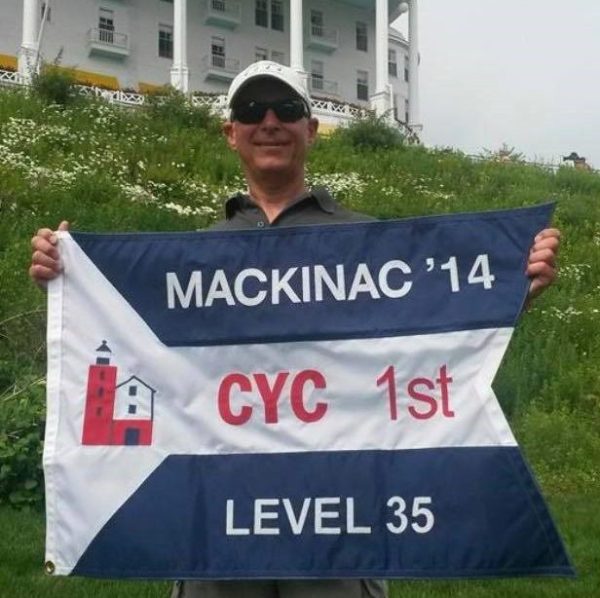 CYC formed a Safety Enhancement Committee to determine not only what occurred but also to derive the lessons learned for the future. The Committee includes members with extensive experience from the America’s Cup, Volvo Ocean Race and Race to Mackinac, and will consult with external safety and marine experts, as well as US Sailing – the national governing body of the sport of sailing — to further enhance its mission.

To date, the Committee has obtained information from crew members on board Imedi, reviewed reports from nearby vessels who responded, and conducted meetings with the U.S. Coast Guard. What follows is a preliminary report of CYC’s findings, which includes the failure of Santarelli’s auto-inflate personal flotation device (PFD).

On July 21, 2018, shortly after the Turbo Section Start of the 110th Chicago Yacht Club Race to Mackinac, Imediwas sailing upwind in winds in the range of 20-25 knots and short-period waves averaging six to eight feet.

These conditions were uncomfortable but not uncommon – well within the experience of the crew on board Imedi that day – and certainly within the design parameters of the yacht itself.

Immediately prior to going overboard, Santarelli was trimming a sail using lines near the aft-end of the yacht – behind the helm. Most of the crew was hiking (sitting on one side of the sailboat) on the windward rail.

Due to the motion of the yacht in the short-period waves, Santarelli lost his footing on deck, slid under protective lifelines and off the back of the yacht.

Santarelli was not clipped to the yacht with a tether, but was wearing an auto-inflatable PFD, designed with a hydrostatic trigger that would inflate a flotation bladder via a CO2 cartridge upon sustained submersion in water – a type of PFD commonly used by boaters worldwide. The PFD was also equipped with an AIS (Automatic Identification System) beacon. He was also wearing foul weather gear.

Crew members on board Imedi observed Santarelli slide off the back of the yacht, immediately shouted “man overboard,” assigned crew member observers to mark his position, and then performed a “quick-stop” maneuver in under one minute.

Imedi was able to make three close approaches to Santarelli during which they observed that his PFD had not inflated. The team members threw additional flotation, which he was unable to reach. During the third approach, the crew observed him slip under the water and sadly not resurface.

Based upon Imedi’s navigational software, the duration of the immediate rescue effort and subsequent loss of Santarelli occurred in approximately six minutes.

Eight nearby racing yachts, after seeing Imedi’s rescue maneuvers and hearing distress calls on the radio, suspended racing to assist the search for Santarelli. Additional water and air support joined the search, including units from the Coast Guard, Chicago Police Department and Chicago Fire Department, as well as numerous pleasure craft, searched until nightfall and then called off the rescue operation.

Santarelli’s body was recovered one week later, Saturday afternoon, July 28.  Upon being advised of the recovery, CYC promptly requested the Coast Guard to determine whether in fact he was wearing a PFD and whether it was operational. The Coast Guard advised CYC on Monday, July 30, based on their conversations with the Medical Examiner’s Office, Santarelli was wearing his life vest but that it had not inflated.

Less than two days later, on Wednesday, August 1, the Coast Guard notified CYC that it could not perform a full analysis of the vest because it had been incinerated without the Coast Guard’s prior knowledge, but that the CO2 cartridge was still available for their review and in the possession of the Santarelli family. Neither CYC nor the Coast Guard was aware of any plans to dispose of the vest in any fashion.

CYC has requested more information on the PFD from the Imedi team in order to conclusively identify the specific make and model of Santarelli’s PFD. What CYC has learned so far is that his PFD did not have any readily apparent branding, unlike many inflatable PFDs on the market today. CYC is awaiting additional information to make a conclusive identification, however its inquiry regarding inflatable life vests as outlined below applies to all inflatable life vests, regardless of manufacturer.

As a result of what it has learned, CYC has launched an inquiry into the safety of auto-inflate PFD’s and their future use in offshore racing events.

The inquiry also includes information provided by major manufacturers of auto-inflate PFDs and will factor in the information gathered over the past two months from the Imedi incident as well as independent reviews and tests, to evaluate certain parameters including the following:
The inquiry's goal is to present new solutions, guidelines, and education to both sailors and the greater boating community about the design, maintenance, and effectiveness of auto-inflate PFDs commonly used by boaters worldwide.

Based upon the preliminary findings, CYC strongly urges all users of auto-inflate life vests to fully comply with all maintenance and use instructions provided by the manufacturer, including but not limited to those related to periodic inspection, re-arming and replacement.

The sport of sailing impacts thousands of lives worldwide every day and while the Chicago Yacht Club, the crew members of Imedi, and Santarelli’s family and friends continue to mourn the loss of an integral part of the Chicago sailing community, it is the sincere goal that the positive changes resulting from this CYC inquiry will have a lasting and profound impact on the sport Jon Santarelli loved so dearly.

CYC will issue a comprehensive report in January 2019.