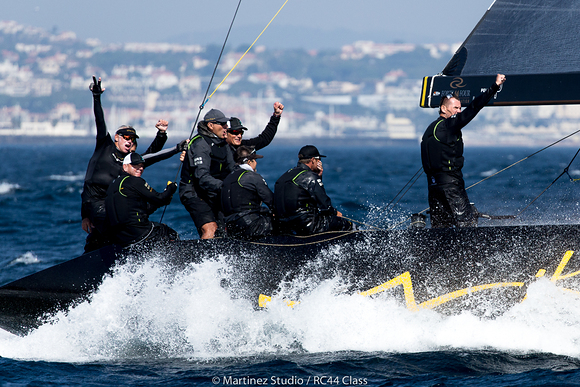 Team Nika became the first team ever to claim a hat trick of RC44 World Championship titles after Vladimir Prosikhin, tactician Dean Barker and their crew fended off Igor Lah's Team CEEREF on the final day of big conditions racing off Cascais.

The two boats started the day with Team Nika five points ahead.

In 15 knot north/north-westerly winds, Chris Bake's Team Aqua was fastest out of the blocks in the first race, becoming the sixth winner at this World Championship.

Meanwhile, in the leader's fight, Team CEEREF closed the gap to three points.
In race two, Team Nika righted the wrongs of the previous race, creeping around the top mark first ahead of Team Aqua.

Bronenosec Sailing Team followed in fourth, but immediately gybed. Within seconds she took the lead, going on to claim her third bullet.

Tactician Cameron Dunn explained: “We rounded in the biggest rightie we'd seen and in a big puff – very windy, in the mid-high 20s. We did a nice hoist, better than all of the boats around us and jumped the gybe on everyone.

“After all that happened yesterday (when they received a four point penalty) I was like 'please let this work…' I was very proud of the boys today.”

Behind, Team Nika retained second as Team CEEREF was third, despite having briefly overtaken their opponent on the first run.

Team CEEREF tactician Adrian Stead explained: “We made a big gain and crossed them, but we didn't consolidate that and they led around the gate.”

With the wind building to 20+ knots and the sea state increasing, Team Nika started the last race with a four points lead and ultimately ended the regatta in style. Winning the committee boat end at the start, she tacked, led out to the favourable right side.

“Today the breeze was a lot more left-shifted in close to the shore,” explained Barker.

From there Vladimir Prosikhin's team sailed conservatively enough in the building wind and sea state to claim the final race and win the RC44 World Championship title by six points.

“I am thrilled,” a beaming Prosikhin said. “It was difficult to the very end. CEEREF is very fast and is a risk-taker. We won the World title last year and they won it the year before. We were expecting a match race from them.”

However Team CEEREF’s crew sailed their own races today. “We got very good starts and were very consistent upwind,” Prosikhin continued.

“The boat was tuned very well and going nicely, with good VMG. I am happy with this team – almost the same as in 2015 when we first won the World Championship. We have sailed a lot together and the atmosphere on board is great.”

Team Nika's tactician, Dean Barker, is becoming 'King of Cascais' having won here with Team Nika in 2015 and this year's TP52 World Championship.

“Cascais has been pretty good to us this year. This week our speed seemed really good, upwind particularly and we put it together over the four days. Our crew work was very solid. We didn't make any real mistakes. We ripped a couple of sails, but they managed to hold together.

“Three races per day in these conditions is very testing on the crew. Vladimir did an amazing job.”

For Team CEEREF it was a case of 'not quite', maintained Igor Lah: “We tried hard, but it didn't work. We tried all our tricks, but Team Nika was better. We made too many mistakes in the first two days.”

Bronenosec Sailing Team's crew suffered near heart failure in the final race when their seventh place to Team Aqua's second almost caused them to lose third overall, ultimately retaining this on countback to Chris Bake's team.

Scoring a 1-4-2, Team Aqua was top scoring boat today, showing their previous Championship-winning form. “It was a good day,” agreed a pleased Chris Bake. “We kept it clean, kept it going, had good boat speed and it is nice to prove to the world we have a little bit of competitiveness. Nika sailed really well – they deserved to win.”

Tactician Cameron Appleton was proud of his skipper and how Team Aqua had performed. “We felt we could have been boat of the day yesterday and today.

“I have a lot of confidence in the guys and the set-up. And today's conditions were awesome – they ramped up until we had 26 knots in the last race. It was dream conditions and phenomenal racing.”

Elsewhere Hugues Lepic's Aleph Racing and Torbjörn Törnqvist's Artemis Racing both had better days while a sixth place overall for Nico Poons' Charisma was not the result the Monaco-based Dutchman had hoped for to help his prospects for winning the 2018 RC44 Championship.

The RC44 Championship Tour concludes with its final event of the season in Cascais over 14-18th November.