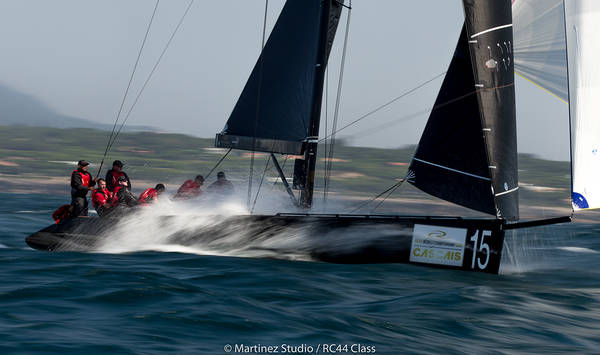 Day two of their 2018 World Championship will go down in RC44 history books with three races sailed in waves, and at the top of the wind range, forcing teams to break out their number 3 headsails and small spinnakers.

Racing got underway on time at 1300 when the wind was already in the mid-teens. Once again the right side of the race course, close to the shore, was paying massively, offering the triple win on the upwinds of tidal relief, flatter water and a favourable right shift.

In the first race it was Igor Lah's Team CEEREF that was first to the top mark only to be rolled during the spinnaker hoist by Vladimir Prosikhin's Team Nika.

From there, the reigning world champions hung on to claim their first bullet of this regatta ahead of Hugues Lepic'sAleph Racing. This seemed to set them up to be the best performers on this brisk day, scoring a 1-2-3, despite having to fight back from a poor start in the final race.

Like yesterday, Team CEEREF followed up a disappointing first race result (this time a seventh) with a win in the second. This came down to choosing a clear lane out to the right, not immediately out of from the start line. Once they had got into the favourable shift and tacked back, they were already considerably ahead and looked comfortable there on.

Artemis Racing was the fourth boat to score a bullet, winning the final race. Despite being in tightly grouped cluster coming in on the starboard layline on the breeziest race of the day, the Swedes nosed ahead, leading around the top mark ahead of Nico Poons' Charisma. They ended the day second top performer behind Team Nika.