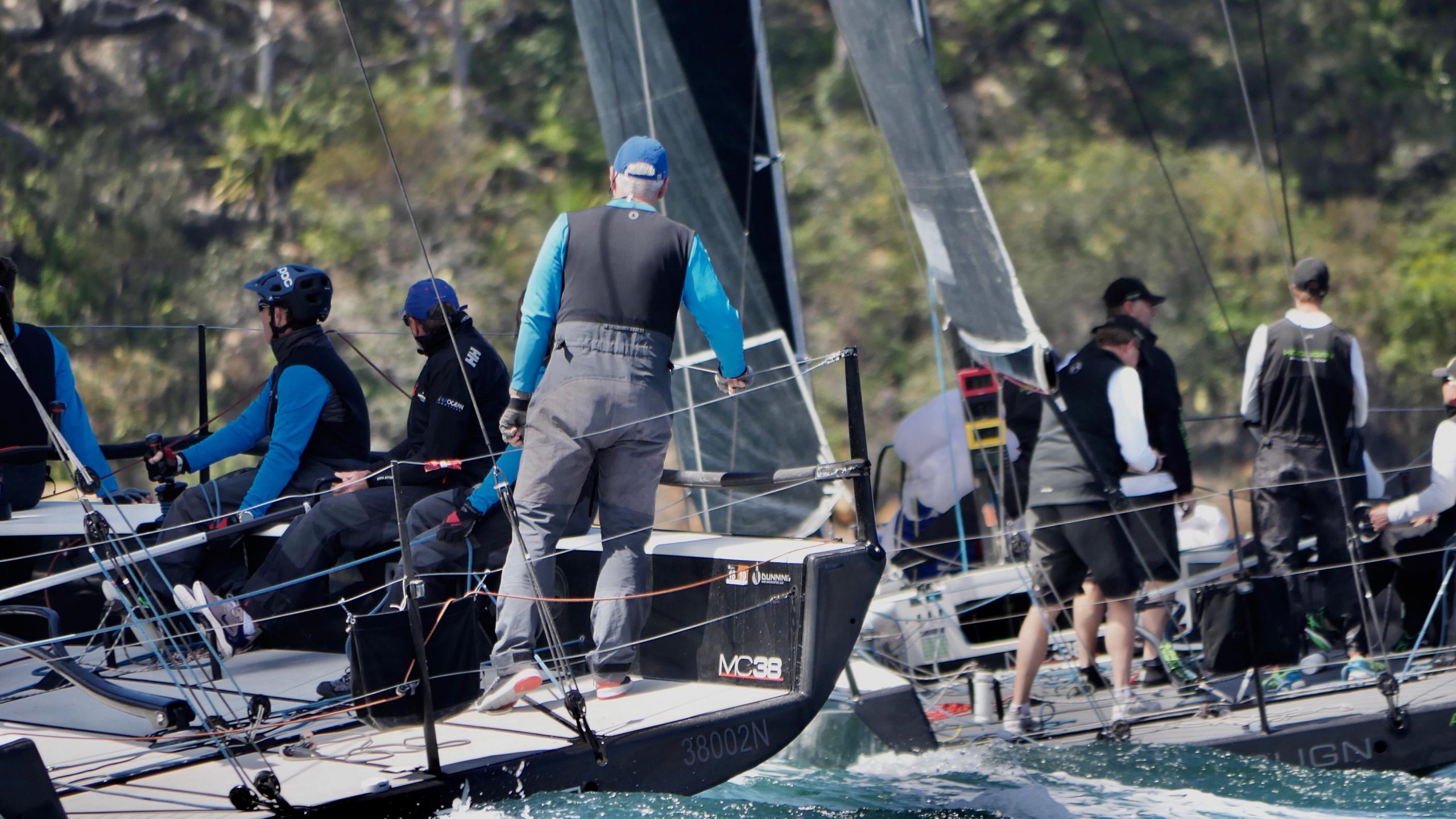 The vice-grip on Neville Crichton’s Maserati crew unexpectedly loosened when the umpire nabbed the chasing Marcus Blackmore’s Hooligan in the penultimate race of the MC38 season’s Act 4 on Sydney Harbour.

A point separated the duelling pair before Hooligan’s disqualification for failing to complete a penalty turn at the umpire’s signal, the same reason Shaun Lane and Quentin Stewart’s Lazy Dog, from Middle Harbour Yacht Club, was rubbed out of a busy race six.

Carrying a costly eight points moved Hooligan back to third going into Race 7 and a follow-up win gave them a silver medal finish. Maserati (Cruising Yacht Club of Australia), meanwhile, was able to freewheel to victory with a second place to finish the September 29-30, 2018 series five points clear.

Joe Turner, Maserati’s tactician said: “We were Boat of the Day both days and Neville’s all fired up after a long break. Saturday was puffy but we came away without damage; the class is used to handling those conditions.”

Not all were untouched. Chris Way’s Easy Tiger (RPAYC) lost the top metre of its mast track when lining up for Race 3. “There was nothing to hold up the mainsail and down it came!” Way said. “It’s a relatively easy fix but we’ll need to pull the mast out.”

Hooligan’s tactician, Will Ryan, knows from his 470 Olympic campaigns that you live and die by the jury’s decision and on this occasion, his team fell foul.

Keen to move on from the incident, he commented: “it’s good tight racing and the owners are really pushing it. Yesterday was right on the limit for the boats and quite inconsistent, which added an extra challenge.”

Ryan felt their downwind prowess in the bigger breeze on day one shifted to a better upwind performance on day two.

Three RPAYC Youth Development sailors, Jess Angus, Hannah Lanz and Ruby Scholten, joined the RPAYC team on Hooligan over the weekend, sampling a variety of conditions, 9 to nearly 30 knots, and top-shelf one design racing on the Harbour.

Illustrating how tight the MC38 fleet is, a mere one minute and one second separated the first five finishers in the series closer, sailed in 12 knots of sou’east breeze.

CYCA race officer Steve Kidson and his team completed the full seven-race schedule. The seven-boat fleet was given an early mark after Race 3 on Saturday, when gusty cold southerlies pushed into the high twenties. Sunday’s lighter and still shifty southerlies allowed for four races back-to-back in the zone between Taronga Zoo at Mosman and Point Piper on the opposite shoreline.

A win in Act 4 is Maserati’s second for the 2018 season and brings them level with Hooligan.

The next event for the class is Act 5, on the weekend of November 10-11 out of the RPAYC. The Royal Sydney Yacht Squadron regatta over the weekend of December 8-9 marks the end of the season.