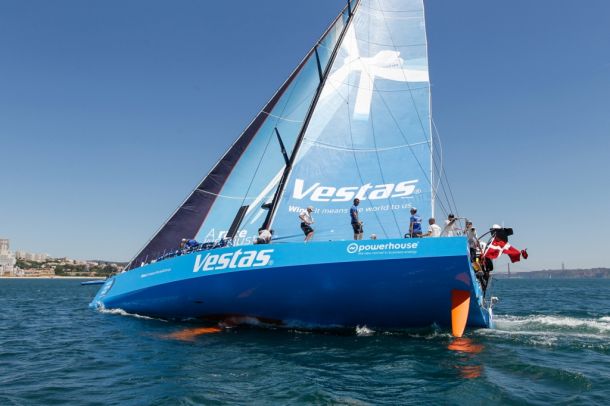 LISBON, Portugal, May 31 – Team Vestas Wind (Chris Nicholson/AUS) shore crew chief, Neil Cox, breathed a huge sigh of relief as his boat was successfully returned to the water this weekend for its first sail since grounding on a reef in the Indian Ocean back in November.

“It’s no longer a boat-building race,” he said, sporting the biggest smile in Lisbon. “We’re back in a boat race.”

The battle to return Vestas Wind to the Volvo Ocean Race has been one of the most absorbing stories of the entire nine-month marathon event – and one of the most remarkable in its 41-year history. After crashing on to a reef near the Cargados Carajos Shoals on November 29 during Leg 2 and damaging huge sections of the hull, many observers expected the team to call quits there and then on the campaign. But the Danish-based, global wind energy  company Vestas, and their backers including Powerhouse, were determined to salvage what they could and then set a highly ambitious target of returning to offshore sailing’s most prestigious event for Legs 8 and 9.

That involved two huge hurdles: recovering the boat as intact as possible from the reef where it grounded, and rebuilding the shattered Volvo Ocean 65 in four months, half the time it normally takes to construct the one-design vessel.

Part one of ‘Mission Nearly Impossible’ was successfully completed when the Vestas Wind made a moonlit arrival in the Portuguese capital midweek. Part two was the boat’s first sail from Lisbon to Cascais and back, on Saturday.

Sure, it had been rebuilt according to the exacting one-design standards demanded by the Race, but would any problems show up once it started sailing?

Cox, skipper Chris Nicholson, and the rest of the Team Vestas Wind crew had the answer they wanted in the kind of testing conditions they will face during Leg 8 from Lisbon to Lorient, France: 25 knots of breeze with the boat’s canting keel bulb almost lifted out of the water.

Afterwards, Australian Cox was delighted to see how the boat had fared. “On Friday, getting the boat in the water was a huge thing in the sense that it was a milestone,” he explained. “But I knew that we still hadn’t been sailing – all we had was a boat in the water. Now, we needed to sail it. The nervousness and anticipation around being fit for purpose focused on today (Saturday). Now we have a work list that’s all about going forward – not backwards.

“It’s certainly been the hardest thing I’ve had to do. It’s a collective effort, no one person could have done it. On a personal level, I’d say it’s the biggest challenge I’ve had to overcome.”

Cox and the rest of the team have paid fulsome tribute to the workers of the Italian boatyard of Persico, who toiled night and day to return the Vestas Wind to join the other six boats on the Lisbon start line.

Next Saturday (June 6), Team Vestas Wind will join the competition once more with the Lisbon In-Port Race, before taking on the 647-nautical mile Leg 8 to Lorient the following day.

“The night of June 7 when the guys go offshore will be quite a moment,” grinned Cox, with typical Aussie under-statement.