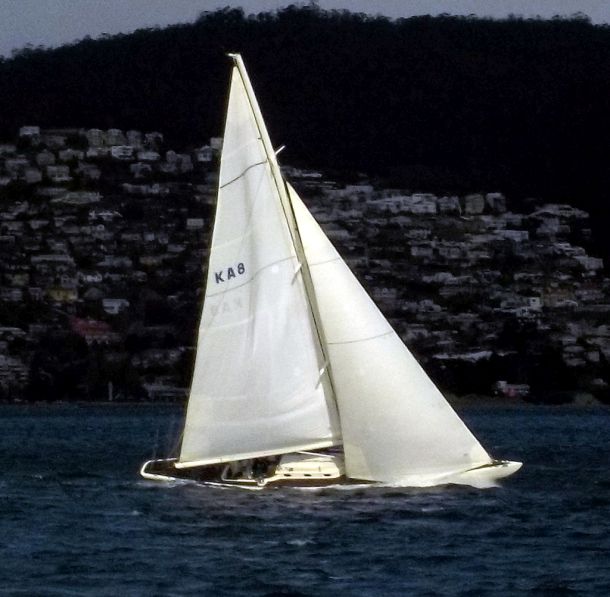 While she has the same beautiful hull lines and massive rig as the traditional 8-metres such as Erica J and Norse that raced on the Derwent from the 1950s to the 1970s, Juana has a winged keel and spade rudder.

Prominent Dragon class helmsman Jock Young skippered Juana in today’s race, sailed in blustery winds of 20 to 25 knots, gusting to more than 30 knots, on a cool and wet day.

“We had a great race…in today’s strong breeze we carried a full mainsail and No 3 jib…she really powered to windward,” Young said after the race, adding: “I had a very good team aboard today from North Sails which certainly helped when the gusts reached 32 knots.”

Apart from a couple of Wednesday afternoon and twilight races, this was the first serious race for Juana which Graeme Wood bought four years ago. The boat was built in Queensland using Tasmania’s famous boat-building timber, Huon pine, for the hull with a teak deck.

He also owns a second modern 8-metre, Juanita, currently in Spain, which he plans to bring to Hobart.

Wood, an internet entrepreneur, philanthropist, environmentalist and yachtsman who owns the Triabunna woodchip mill site, is currently in Europe, but will skipper the yacht in the Royal Yacht Club of Tasmania’s first Winter Series on Sunday, June 14.

Tas Paints got the gun 13 seconds ahead of Host Plus with Wild West a further 15 seconds astern.