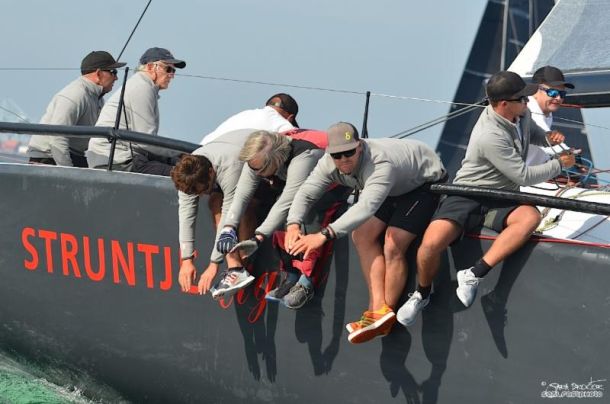 In typical Farr 40 fashion, the West Coast Championship will come down to the final day with at least four boats in contention for the overall victory.

Groovederci passed two boats on the last two legs to get the gun in Race 9 on Friday and that win moved skipper John Demourkas into first place in the standings. Renowned professional John Kostecki is calling tactics on Groovederci, which is clinging to a one-point lead over the Australian entry Estate Master.

It was DoubleTree San Pedro Day on the Pacific Ocean and the reliable sea breeze delivered by the Hurricane Gulch enabled PRO Peter Reggio to complete three more starts and keep the regatta on schedule for an 11-race series.

Following an onshore postponement, action got underway around 2 p.m. local time in 8-10 knot southwesterly winds. Flash Gordon 6, skippered by Chicago-based architect Helmut Jahn, found its legs on Friday and sailed superbly – going wire-to-wire to win Race 7 then following with a second in Race 8.

“There are days when everything comes together and this was one of them for our team,” Jahn said. “We said this morning that this was moving day and we managed to move somewhat.”

Flash Gordon 6 rounded the first windward mark at the front of the 15-boat fleet then held off a strong push from Nightshift (Kevin McNeil, Annapolis) to hold onto the lead the rest of the way.

“We got a very good start, went out to the right and stayed there. It was very tight with Nightshift, but we were able to extend a bit on the downwind legs,” Jahn said. “It is extremely tough out there. The boats are all the same speed so you make gains by having a slightly better angle or finding more pressure or staying out of foul current.”

German skipper Wolfgang Schaefer and his Struntje Light team also had a very positive day on the water with a score line of 6-3-5. Struntje Light is just one point behind fifth place Flash Gordon 6.

“We've had our ups and downs in this regatta. Today we were up and took a step forward,” Schaefer said. “Starts are very important because this is basically a one-track race course. That is part of the game and we managed things much better today than we did yesterday.”

Ray Davies is serving as tactician aboard Struntje Light, which brought a bit of levity to the regatta by posting a funny onboard video to Facebook on Friday. Schaefer suggested that Struntje Light may do some match racing with Flash Gordon 6 on Saturday in hopes of moving up a place in the final standings.

“Our goal going in was to finish in the top five and that is still possible,” Schaefer said. “What is more important is to improve our crew work and boat-handling because we are focused on Long Beach at the end.”

Twisted was vying to become only the second Corinthian entry to win a race on the International Circuit during the current two-year West Coast swing. Last season, skipper Michael Shlens and his crew on Blade 2 snatched a bullet at the California Cup.

Owner Tony Pohl and the Twisted team came excruciatingly close to becoming only the second Corinthian entry to win a race on the International Circuit during the current two-year swing to the West Coast. Twisted led Race 9 around three marks.

“We picked up some kelp about the midway down the last leg and that slowed us down. There was nothing we could do about it,” Pohl lamented. “Those things happen in sailboat racing. We really would have liked to have won that race, but we are still pretty happy about the day as a whole.”

Twisted posted a seventh in Race 7 and has moved into second place among the eight Corinthian entries. Insanity, skippered by Rick Goebel, holds an insurmountable 25-point lead in the Corinthian standings so it is now a battle for runner-up with four other boats within six points of Twisted.

“We finally figured out that right is the way to go,” Pohl said. “We have four new crew members and it takes time to come together as a team. We know we have the boat speed once we get things dialed in.”

Groovederci's come-from-behind victory in Race 9 was huge as it gave the Santa Barbara boat the lead going into the last day of competition. Reggio is planning to complete two races on Saturday, meaning there is plenty of drama still remaining.

“It's a game of inches and the boys worked very hard to get every knot of speed out of the boat,” Demourkas said. “I have never seen things so freaking intense onboard. We are very happy to have the lead at this stage of the regatta, but we know it's going to be game on tomorrow and we will have to really be on our toes in order to close this out.”

Demourkas was enjoying a drink at host Cabrillo Beach Yacht Club after Friday's racing when he was asked what it will take for Groovederci to earn its first class victory since the 2012 East Coast Championship off Annapolis.

“A good night's sleep!” Demourkas said with a laugh. “Hopefully, there won't be much match racing. We have to go out and put up a good result in the first race then figure out what we need to do in the last race.”