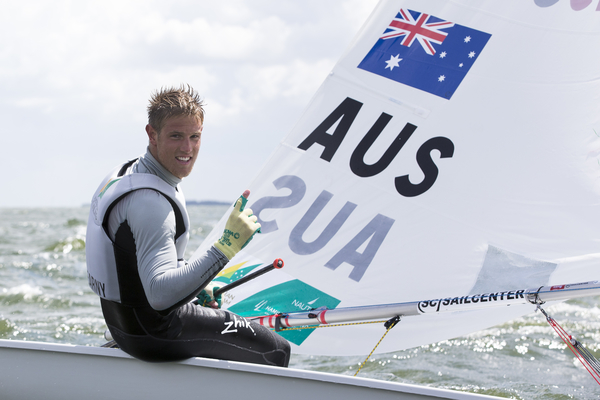 The Medal Race format in Olympic sailing is designed to create drama and uncertainty, especially when the wind is blowing hard – which it did on the final day of Delta Lloyd Regatta.

Based on previous form, Marcus Hansen and Josh Porebski would have been expected to hold on to gold in the men’s 49er, but an uncharacteristic capsize put them to the back of the fleet. Diego Botin and Iago Lopez seized the moment, won the race, and won Spanish gold.

The top two nations, with three golds apiece, were Australia and the Netherlands. So often the bridesmaid on home waters, PJ Postma finally sealed the deal in the Finn this year. Marit Bouwmeester was dominant in the Laser Radial, and 49er FX team Annemieke Bekkering and Annette Duetz clinched a third gold for the host nation.

Two of Australia’s golds came in the Paralympic classes, the SKUD (Daniel Fitzgibbon and Liesl Tesch) and the Sonar (Colin Harrison, Jonathan Harris, Russell Boaden), with Matt Wearn seeing off his Dutch rival to win the Laser class.

“It was an extremely tricky race. Every time I thought I had it, Rutger would come back. He definitely made it hard for me, but in the end it was really good,” Matt Wearn said after the race. “It’s a big step to win this event. I’ve had a couple seconds over the last few years, but have not be able to seal the win, so it’s great to finally get the win under my belt and hopefully it’s not the last. I will head to Weymouth for the World Cup next, then straight to Canada for the Worlds and hopefully with those two regattas I can qualify for Rio (test event).”

Wearn faces a tense battle with Australia’s current Laser World #1 Tom Burton – who did not contest Delta Lloyd – for the Australian spot at next year’s Rio Olympic Games, with ISAF regulations permitting countries only one entrant per nation.

Australia won silver in the Finn, with Jake Lilley holding off New Zealand's Josh Junior by a single point. Lilley, who had just finished second at the Finn Junior European Championships a couple of weeks ago, built up his performance during the week, posting two race wins over the last two days of final series racing and cementing his second position.

“This week didn’t go as smoothly as it might have looked on the scoreboard. I was actually pretty sick the first two days and contemplating retiring. But I had a good team around me to get me through the week and to put in some good races, which I’m happy about,” Lilley explained after racing.

“The season is starting to come around nicely with some good results at the Europeans and now to finish here with the silver medal and I will look to keep building on this for the rest of the season.”

Oliver Tweddell finished the event in fifth, with both sailors vying for the Olympic berth and aiming to build on their performances at the Sailing World Cup in Weymouth next.

The bronze medal came in the 49er where Joel Turner and Lewis Brake have been in medal contention all week.

“It’s been both interesting and exciting. Lewis and I have not really been performing too well this European season and coming here with a fair bit of breeze we finally started sailing well together. We’re really happy we are performing well again and it’s been a fun regatta,” Turner said. “This regatta has been more of a warm-up and training regatta in the lead up to Weymouth where we’ll head tomorrow for training and then hopefully some good results at the World Cup.”

David Gilmour (WA) and his crew Rhys Mara (VIC) did not have the best regatta and dropped into 20th over the opening two days of the 49er class. The pair managed to climb back up the ladder into overall 13th and finished the regatta on a high by winning the last race.

Australian Sailing Squad’s new combination of Will Phillips (VIC) and James Wierzbowski (VIC) finished in overall 18th, which secured them the qualifying spot for the ISAF Sailing World Cup in Weymouth.

In the 49erFX, Tess Lloyd and Caitlin Elks reversed the overnight placings against teamates Haylee Outteridge and Sarah Cook, moving up to sixth place and leaving their rivals in seventh. There was just five points between the two crews.

It was the fist international medal race for the still new combination of Outteridge and Cook and the seventh place also secured the pair the qualifying spot for the ISAF Sailing World Cup in Weymouth.

“We are really pleased we have qualified for Weymouth as it allows us to compete against the top FX teams and work towards our campaign goals. And it’s great to finish seventh in our only second international event together ” Haylee Outteridge said after securing the qualifying spot.

About the event she added: “It was a really challenging regatta, but we are really pleased with the progress we have made this week and have enjoyed racing here as it has helped us prepare for the key events this summer, which are the Weymouth World Cup and the Europeans in Porto in July.”

The Polish squad dominated the RS-X windsurfers, with men’s and women’s golds going to Pawel Tarnowski and Maja Dziarnowska respectively. Sweden and Great Britain took their only golds the previous evening in the men’s and women’s 470 Medal Races, and France took its sole gold thanks to Damien Seguin’s comfortable victory in the 2.4mR Paralympic singlehander.

The very last Medal Race of the day proved to be the most dramatic, with two Danes and a Kiwi team locked in a three-way fight for the Nacra 17 medals. While the Swiss led the race from start to finish, the medal battle was taking place at the back of the fleet. Denmark’s Lin Ea Cenholt and Christian Peter Lubeck did just enough to clinch gold.

Just a few metres behind, the other Danish boat of Allan Norregaard and Anette Viborg was about to cross the finish line when they pitchpoled and capsized. Fortunately for them, the Danes crossed the line upside down to cling on to silver, the Kiwis settling for bronze. Australians Euan McNicol and Lucinda Whitty moved up a place from their overnight score to finish fifth, two places and four points ahead of Darren BUndock and Nina Curtis.

It has been a tough, windy week for the 707 teams from 74 nations. The IJselmeer – with its shifty, gusty breeze and short, sharp, unsympathetic chop – always asks the hardest questions of these accomplished sailors. Which is why they keep on coming back, year after year, for more high-quality competition. Next year’s event takes place 24-28 May 2016.

– Delta Lloyd media, with Australian material added by mysailing.com.au and the AST.