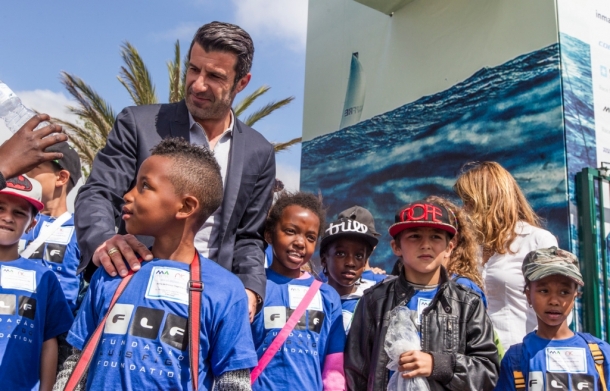 Luís Figo, the Portuguese football great, on Monday visited the Volvo Ocean Race village in Lisbon on International Children’s Day to promote the work of his charity foundation, which helps to bring sport to a wider network of youth around the world.

The retired Portugal attacking midfielder, who was one of the game’s leading players during the 1990s and 2000s, is no stranger to the race, having been on board Abu Dhabi Ocean Racing in 2012.

He again visited the Emirati boat, which is currently leading the 2014-15 edition, and met many local children visiting the Lisbon stopover in his home country.

Figo, 42, said: “It’s a great pleasure for us to join this global event, and have the opportunity to bring, on International Children’s Day, so many kids from different sections of Lisbon.

“They were able to spend a different kind of day, doing activities around the sea, and learning how this event works.

“Today is International Children’s Day and in my foundation, since we started this work, we’ve tried to celebrate this day with a special event.

“This year we had the chance and the privilege to be here in association with the Volvo Ocean Race to try and offer kids the chance to try different activities related to the sea and sailing.

“One of the areas we work on in the foundation is social integration, so I’m pleased to have this chance.”

Figo, a former FIFA World Player of the Year, was particularly pleased to link up again with Abu Dhabi Ocean Racing's crew and their British skipper, Ian Walker.

“I follow the race through the news and the newspapers. I know that Abu Dhabi Ocean Racing are doing pretty well – I had the chance to meet them three years ago in Lisbon and I hope that they continue to do well and have a successful finish.”

The ISAF-appointed independent international jury will be hearing four cases on Wednesday (June 3) after alleged breaches of sailing rules during Leg 7 of the Volvo Ocean Race.

Team SCA are to answer two cases: that they sailed against the traffic flow in a Traffic Separation Scheme (TSS), and, additionally, into a Rhode Island Sound exclusion zone.

Dongfeng Race Team and MAPFRE are also facing protests that they sailed against the traffic flow in a TSS.

The Race Committee has brought all the cases to the jury, If a penalty is awarded, the jury has discretion on what it will be.

Full details of the cases are available on the Race Noticeboard.