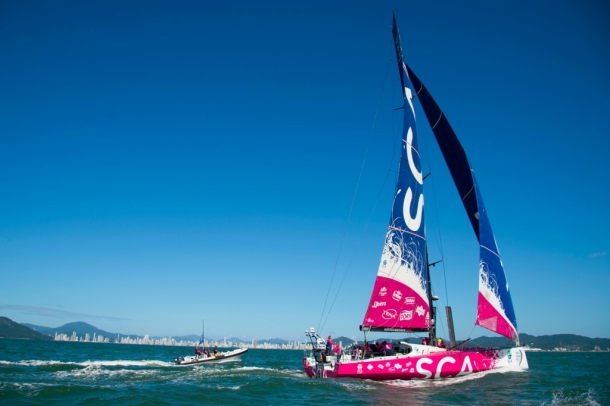 Battered, bruised, but defiant to the last, Team SCA (Sam Davies/GBR) finally completed a gruelling Leg 5 of the Volvo Ocean Race on Tuesday and arrived to a well-deserved Brazilian welcome fit for heroines.

Itajaí reserved its very best weather for the arrival of the first all-women’s crew to enter the race for 12 years, a sharp contrast to the conditions the team have battled with since leaving Auckland on March 18.

At the beginning of last week, having struggled in 50 knots of wind (92 km per hour) and a confused sea state, Team SCA were one of three crews to crash on their sides during a Chinese gybe, damaging their fractional code zero, a key sail in the process.

The setback left them with no chance of keeping pace with the main racing pack led by winners, Abu Dhabi Ocean Racing (Ian Walker/GBR), which completed the 6,776-nautical mile (nm) leg on Sunday.

At one stage, they also lost their electronics overnight, effectively sailing blind in the Southern Ocean.

Then, last Sunday, they were rocked again by three collisions with unidentified objects as they raced up the Brazilian coast in the South Atlantic, the first doing considerable damage to the rudder.

Undaunted, Davies and her 11-strong crew battled on to finish the event’s toughest leg at around 1352 GMT (local time 1052) on Tuesday (see panel for elapsed times).

“We made it to dock! We made mistakes, we had things go wrong, but we fixed it all and we've made it here, and we're in one piece so we're happy,” said the British skipper.

“We proved at the beginning that we could keep up with the others, but then we broke our fractional sail, the sail that we really needed for this leg.

“So we kind of let ourselves down by losing that sail. It was really, really hard; we were frustrated. There was nothing much we could do in certain conditions without our fractional.

“The race became a bit of different challenge from then on.”

Team SCA have earned five points to take their overall tally to 29.

The shore crew, working with the race’s Boatyard team, will now have a busy few days ensuring the boat is back to optimum condition ready for the Team Vestas Wind Itajaí In-Port race on April 18 and the Leg 6 departure for Newport, Rhode Island, a day later.

Meanwhile, Dongfeng Race Team (Charles Caudrelier/FRA), who were forced to retire from the leg after breaking their mast on Monday last week, are delivering their stricken boat to Itajaí under sail and motor.

They will have about four days to have their boat repaired in time for the Newport departure.