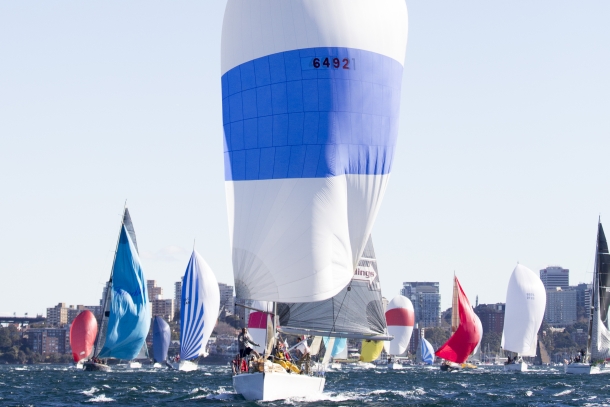 The Great Veterans and Ladies Day races signal the onset of colder weather and the start of the Cruising Yacht Club of Australia’s increasingly popular Land Rover Winter Series on Sunday 19 April.

On 26 April, ready and warmed up, racing starts in earnest, every Sunday through to mid-July. Come fickle airs and windy days, rain and shine, racing is on in both spinnaker and non-spinnaker divisions.

Comprising 10 pointscore races plus The Great Veteran’s Race (a non-spinnaker affair and the CYCA’s tribute to classic Sydney Hobart Yacht race yachts which ailed south from the 1940s through to the early 1980’s) and three Ladies Days races, it is an opportunity for Land Rover Sydney Gold Coast Yacht Race and subsequent Queensland regattas entrants to tidy up their crew work.

CYCA Commodore John Cameron said: “It’s the Land Rover Winter Series again… the year has flown. It is the most popular racing series, with block entries of over 130 yachts and an average of at least 120 yachts on Sydney Harbour every Sunday.

“Reflecting on my experience of winter racing, my first keel boat sailing was the Winter Series at the CYCA in the later part of the1960’s and I haven’t looked back since.”

Competitors take different things from the Series. Some take their racing seriously, while others consider it a fun way to spend Sunday or to train new crew up for the season ahead. Owners breaking in new purchases, such as Sam Haynes, who recently purchased the TP52 previously known as Fomo and, Shogun, find it useful to learn their new boat.

“We will be definitely sailing the TP52 in some of the Winter Series. It will help us get to learn the boat I bought as a step into the grand prix level.” Haynes said.

“I felt we had got the Rogers 46 (ADA Celestial) into the best shape it can be in and won all we could with it. It was time to step up,” added the Sydney veterinarian who won the Land Rover Sydney Gold Coast Yacht Race last year, giving him the momentum to go on to claim the Blue Water Pointscore.

Weekly prizes are awarded to first, second and third placegetters in each division and include exclusive CYCA Land Rover Winter Series merchandise. One lucky division winner each week will be drawn to receive a Land Rover Range Rover Evoque experience for a week.

Additionally, the Noakes Group is providing a lift stand launch and two free laydays for one lucky division winner each week.

Start your Sunday with a laidback breakfast prepared and served by volunteers from the CYCA’s Breakfast Club. It’s a great way to catch up with your crew and old friends before heading out to race. Or try the Club’s Bistro. LEat is open every Sunday from breakfast onwards and also offers a variety of on-board catering, which must be pre-ordered.

“The Sunday morning Breakfast Club starts the day with the allure of onions frying – and eggs and sausages cooking. We’ve created a winter Sunday culture, a must to be experienced before a day sailing on the best playground in the world,” Commodore Cameron said.

“As I recall, the atmosphere on a Sunday at the club during the sixties was not quite the same as today. The fleet size at most was 15 to 18 on a good day and the ladies came and made pea and ham soup – they did not sail – times have changed,” he said.

You can place your block or casual entry now at:  https://www.topyacht.com.au/db/aus/entry_menu.php?EventID=435