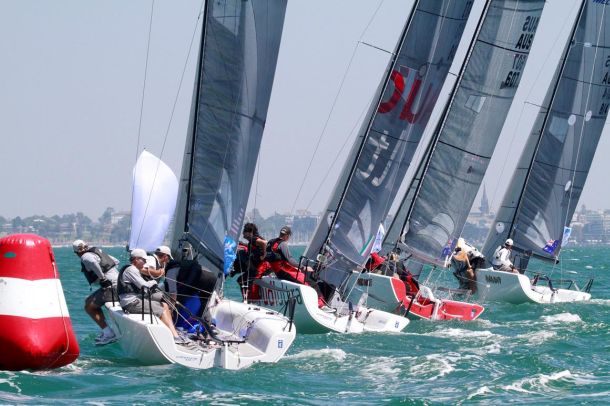 At the end of the first period of the pre-registration, more than 100 boats have been registered to participate at the worldwide gathering Melges 24 World Championship 2015 in Middelfart, Denmark. From 30th June to 5th July, Match Racing Denmark along with Middelfart Sailing Club and in cooperation with International Melges 24 Class Association will run one of the largest Melges 24 class title events in the class history.

The numbers speak for themselves: 111 teams from 19 countries and a bit less than three months to its start will be on what is already seen as one of the best Melges 24 world championships in recent years. Last time when the class met such fleet was with more than 125 crews from 22 nations in Torbole, Italy in 2012.

Søren Laugesen, Chairman of the Organizing Committee is happy about the outcome of the registration so far. “As an organizer, I am pleased to see the benefit of all our hard work and planning. It just proves to me, that it helps to be prepared early, and to spread the information among the sailors. Having more than 100 registered boats three months before the event takes place that is very promising for the class It was beneficial to me to visit the Melges 24 Europeans 2014 along with the Danish Championships, and we are doing everything we can to make sure that all sailors will have a great experience in Middelfart Denmark this summer. It is important to share the knowledge, and I hope the organizers of the future events will take the opportunity to visit us here in Denmark,” Laugesen was welcoming.

Jens Wathne, Chairman of the International Melges 24 Class Association is very excited about the upcoming World Championship in Middefart, Denmark. “Reaching 100 boats before the deadline of early registration is massive for the Melges 24 class. It proves that our high performance one-design class is rocking in Europe. Some of the best sailors from all over the World will compete and I know that the Danish hospitality and friendliness will make this as a championship to remember.” At the same time he wouldn't mind to see the entry list growing: “If you have not entered yet, do it today and continue the preparation for one of the biggest Melges 24 World Championships in Northern Europe!”

All sailors coming to Middelfart in June (or sailors still considering the participation), will find a lot of useful information and good arguments in favour of taking part and coming to Denmark from the IMCA's site visit report. From this summary you'll find both useful facts and numbers illustrated with pictures about Denmark, Middelfart, logistics, marina, racing area, facilities, accommodation, social events and leisure time options etc.

The online entry, the Notice of Race, and other information about the venue is available at www.melges24worlds15.dk.