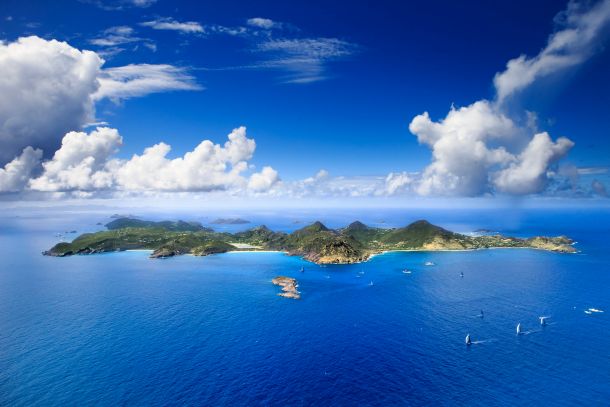 With almost 80 entries, roughly a dozen more than last year, Les Voiles de St. Barth will see a record level of participation this year. The event, scheduled for its sixth edition April 13-18, has become one of the more important events on the Caribbean sailing circuit, mixing good-vibes racing with stylish shore-side pursuits on the delightfully small yet enormously sophisticated French island of Saint-Barthélemy (aka St. Barth).

“With lots of cooperation from many, many people we have been able to exhibit that St. Barths is a valid destination for serious race teams,” said Competition Manager Annelisa Gee, noting that seven 40-foot team containers are being accommodated this year. “That's huge, because it means logistics of getting boats and equipment here are getting better with each edition. Bigger and better – that's the common theme each year, whether it's referring to the number and quality of boats that come, the amenities and on-shore events for the teams, or adding – in the case of this year – an offshore racing option to the tried-and-true tactical inshore race courses that everyone likes so much.”

Sailing over four racing days (Tuesday-Wednesday, April 14-15, and Friday-Saturday, April 17-18) will be Maxi, Spinnaker, Non-Spinnaker, Racing Multihull, and One-Design classes negotiating various distance courses that typically snake through and around the reefs and smaller islands surrounding the 9.5 square miles of volcanic island that is St. Barths.

Comanche and Rambler 88, both sporting the newest in sail racing's technological advancements and measuring in at 100' and 88', respectively, will surely be the most gripping to watch in the ten-strong Maxi division, especially if organizers choose to showcase the power of these thoroughbreds with a newly designed super-sprint option of 40 plus miles to Tintamarre Island off St. Martin. Dependent on sea state and weather conditions, the other Maxis (and possibly Multihulls) could also sail this course, and they would certainly be no less ambitious about optimizing the reaching legs to achieve a maximum speed – and fun – factor. The Maxi group includes returning teams on the Maxi 72 Bella Mente, which just won overall honors in the Caribbean 600; the Swan 80Selene; and the Marten 72 Aragon, while newcomers are the Farr 73 Maximizer, Swan 90 Odin, the Baltic 78 Lupa of London, and the RP 63 Lucky.

With Lupa of London (skippered by Great Britain's Jeremy Pilkington) fresh off class wins at Giraglia and the Maxi Worlds as well as line honors and overall IRC victory at the inaugural RORC Transatlantic Race, she may be the new team to beat, but not if Luckyhas any say in the matter.

“We've been around for eight years racing a TP 52 and just transitioned to the RP 63 this spring, so Les Voiles de St. Barth will be our first event in the boat,” said Lucky's owner Bryon Ehrhart (Chicago, Ill.), who won the 2010 Middle Sea Race (with his TP 52, also named Lucky) on his first try and followed through with impressive finishes at a slew of other “bucket list” sailing events, including Hong Kong to Vietnam (which he won in 2013) and the China Sea Race (second in 2014). Now it's time for Ehrhart to check off Les Voiles de St. Barth; he says the regatta's reputation put it squarely in his sights. “I understand it is very well run and in a beautiful setting with great breeze,” he said. “The class includes some of the best competitors in the world, so I'm looking forward to seeing how we match up against them.”

In the Spinnaker division, 49 boats will compete, including David Cullen's J/109 Pocket Rocket and Eamonn Rohan's chartered Solona 44 Ramanessin, both defending class champions. As in all divisions, it won't be known until closer to the event how classes will be split exactly, but a sure bet for tough competition will be new contender Spookie, a Carkeek 40 known for cleaning up in IRC and HPR racing in the States. Spookie's Steve Benjamin (Norwalk, Conn.), who co-owns and sails the boat with his wife Heidi Benjamin, concedes that the CSA (Caribbean Sailing Association) Rule prevailing at Les Voiles de St. Barth may not be as favorable for his boat, but he respects it nevertheless. “We don't race just for rating, we race for the competition and the sport,” he said. “We competed in Les Voiles a few years ago with Decision (also a Carkeek 40) and had a great time. The racing is spectacular; we like the combination of the courses, and of course, the atmosphere in St. Barth can't be beat.”

Benjamin claims Spookie is very strong sailing downwind and reaching: “The challenging part for us is going to be upwind against the bigger boats, which is what got to us last time we raced here with Decision. We are pretty sure that boats like the TP 52s (Vesper, Sorcha, Conviction-Team Vag) will have a strong advantage upwind.”

Another Spinnaker division competitor returning with a different boat is Jim Madden (Newport Beach, Calif.). He'll be sailing his Swan 601 Stark Raving Mad VII with a crew of 16 versus the nine he raced with last year when he won his class on his J/105 of the same name.

“I usually like to have two sizes of racing boats,” said Madden, who sailed the Swan 601 to victory in the 2014 Newport Bermuda Race and the Onion Patch Series that preceded it. “For the larger boats, I focus more on their ability to ocean race and do coastal point-to-point racing, like what we'll be doing at Les Voiles de St. Barth. I hadn't heard much about Les Voiles until last year when a few of my crew suggested that we do it. I went there not knowing what to expect, and it actually turned out to be one of the best events I've ever done. The island is beautiful, and the race organization did a really good job running the event with clear communication and fair races. It was also windy for the most part, and more breeze makes for more fun.”

The Non Spinnaker division currently has 10 entries, ranging from Matt Dana's 31-foot J/95 Shamrock VII to Steven Schmidt's 70-foot Hotel California, which returns each year clearly to have the most fun out of any, sailing with family and friends.

Melges 24s are expected to have their own one-design start, with returning teamsBudget Marine/Gill, Island Water World, and Boost'n Sail leading the charge, while nine Racing Multihulls will compete, giving the new Gunboat 55 Toccata a chance to show its wares against the MOD 70 Phaedo 3, which just smashed the Carribean 600 record; the equally powerful Nigel Irens 63 Paradox; the sleek, flying French GC 32 Le Carré/Diamond Genesis, and Gunboat's newest foiling G4 Timbalero 3.